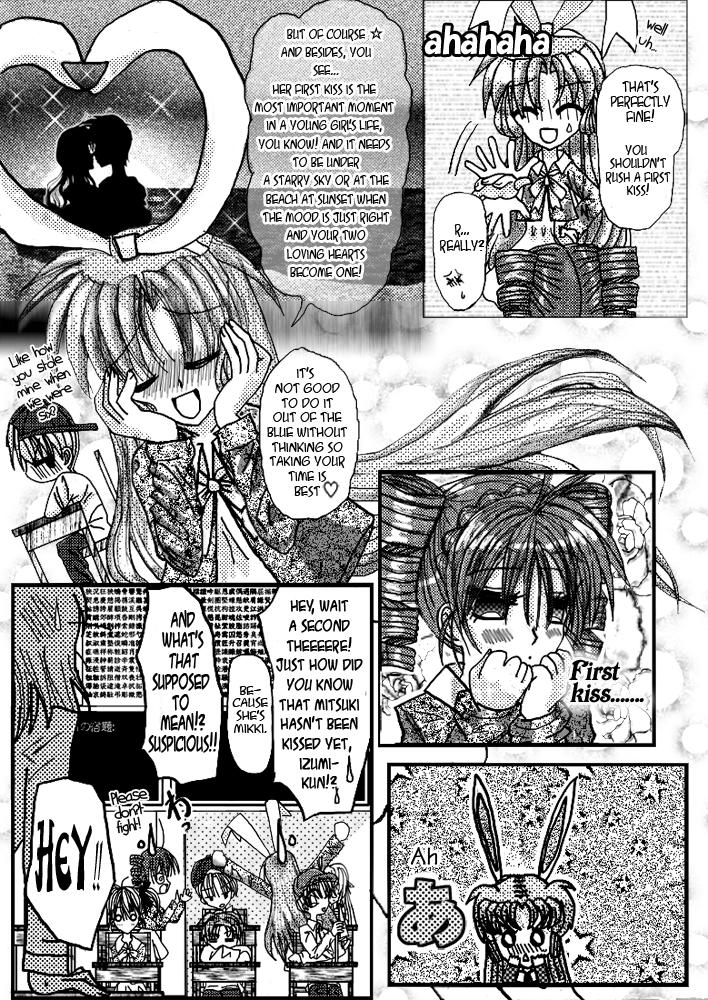 …ta….tadaima….@_@ - OMG it's been nearly a year since my last update. I REALLY do not deserve to have as many nice fans as you all who've stuck with me this long! Reasons for the hiatus are various: want to get better at drawing for one, got into lots of other hobbies for another…still also get too submerged into later parts of the manga that are more fun to work on. I also ran into a LOT of obstacles in getting this page finished….you have no idea. XD This first scene of chapter one is a little boring for me to draw, you see, but I'm putting as much effort as possible to make up for that. @_@

Anyways….yes, Meroko-chan never takes her own advice and she stole Izumi's first kiss when they were six years old. XD I hope to draw an extra chapter all about that.
And her mushy goofy dialogue there….it's also my own stupid fantasy of what a first kiss SHOULD be like. XD (Mine was stolen too very long ago…and it still bothers me to this day…grah I NEVER SHOULD'VE….ack nevermind. :p)

I really love how the silohuettes in her daydream turned out. I drew ‘em with the mouse so it took a while. XD; They are just a random couple too. I thought of making another cameo…but I don’t wanna wear out the cameo joke. Too much would get obnoxious real fast. :p

Who is yelling at the kids? You will get to see on the next page which certainly won't take as long as I've already started drawing it!

Oh yeah, can you spot more Arina character cameos? There are three this time but only one is very obvious. XD


@TempShini: That is good…because I don't wanna end up like the pros who get worse with each page lmao. XD

@SquishyNinja: Thanks very much! :D

XD I love how her ribbon makes a heart! My first kiss was stolen too! By a boy who was freakin', like, seven years older than me! D: But Kuro made it up to me with our first kiss~