Away with the Spirits

Whew! So much exposition. But don’t worry: it’s over and done with for the time being, and I don’t plan on making it a too regular feature of my comic. Looking at it, it seems like witchcraft is not an easy profession, right? Like Sophie, we're again reminded that Gundula can only make it look as easy as she does, because she has been an accomplished professional for centuries. She generally has a lot to learn, it seems. Tiger demonstrated absolute trust by sticking his bum into her face, thus telling her in cat fashion that he considers her part of his family, and can you believe how she returns the favour?! ;)

In a similar way (I’ll leave it to your interpretation in which of the above ways), this page reminded me of how page composition is an art form in itself. Somehow, nothing would fit together this time, until I painstakingly made it so. I can't honestly say I'm totally happy with the outcome, but whenever am I?

I’m particularly concerned about not explaining too much, and I just hope I didn’t. Revealing too much just spoils everything, even if you do need to have some background stuff for consistency. It tends to take the magic out of the magic, if you get my drift. Nevertheless, I felt this spiritwalking business needed some clarification for three good reasons.

Firstly, I was kind of shocked when I realised that the threads of this storyline have been left dangling since early 2013 – for four whole years now! I had it all planned out long before, so with my old notes that’s not a great problem for me, but it’s way to long to reasonably expect anyone else still to remember the details of what this is about, let alone where we left off. Basically, it boils down to my having to provide kind of new start.

Secondly, my idea about the way you get initiated into witchcraft is a pretty complex concept to introduce into a episodic fun comic; it’d actually be better suited for a (graphic) novel. (By the way, Sophie’s suspicions about its basic sources are quite accurate, even if the rigorous distinction between shamans and witches is entirely my own twist to the matter. Apologies to those of a shamanic or animistic disposition by the way. Never forget: it’s just a comic.)
Even if there hadn’t been the huge break in between, I’d have done something like this page anyway. I don’t think it was too clear what this storyline is aiming at back then, since we hardly got past its introduction.

Thirdly, I want to bring this storyline to a conclusion, so the comic can move on the way I planned it. Master the Tiger will never have more of a consistent overall story than I feel to be absolutely necessary, but I’d like the story of Sophie’s work experience to evolve a bit. So the next few pages will focus on Sophie’s attempts at spiritwalking and what’ll come out of it. I hope it’s not a spoiler if I mention that Tiger will play a crucial role, and in consequence you’ll get to see plenty of him in any case. After that, the comic will shift back to its more domestic ambience again. I love experimenting, as you might know, but I also know better than to change a running system.

I should mention that I inserted again one or two spoofs and cameos, paying homage to artists or writers that inspired me. Let’s see if you can find them all. :) For the moment I’ll mention only one: my personal take on Magic Circle by John William Waterhouse from 1886. I’d wanted to do this for some time and my recent sojourn in England kind of reminded me to do so already (it also prompted these cliffs in the shaman panel, that so patently don’t look like Northern Germany if you don’t count the Baltic Sea island of Rügen). I’ve always considered this painting an artistic milestone that helped define the popular image of witches we’ve got today. It certainly served as one of my many inspirations for Gundula. For a time I thought I'd have preferred to put her into the foreground instead of Sophie, what with the hair colour and all that. Looking back, though, I think it’s actually better I didn't. Even after giving them my personal treatment, the symbolism-laden Pre-Raphaelite frills don’t really match her particular approach to witchcraft too well, whereas Sophie is all frills and fancies. 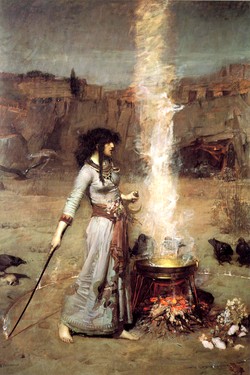 Clicking the picture should link to a slightly larger version on the Tate Gallery’s website.

Thanks a million for reading and commenting. See you next time!

I've been watching The Post Apocalyptic Inventor on YouTube. He lives in Germany and has lately been doing videos about his hometown. They made me think of some of the historic places you have depicted in Master the Tiger and many of your comments on German history and local color. Very educational and entertaining. Looking forward to more Gundula, Sophie and Tiger.

This is a great look into Sophie's journey into witchcraft. Funny, too.

Ha I've seen the Magic Circle painting and your scene triggered the memory! Great exposition!! I especially like the differences in Witches and Shamans (hilarious depiction of the latter)!! Spiritwalking!! Assuming it's a real think, I never could master it, as I can't keep my mind in the needed state long enough!! Awesome epic page!!

Hey, thank you so much! I was kind of worried that it's all a bit much - perhaps it is. As for spiritwalking, the mythology behind the concept is real in that I loosely based it on one of the three kinds of old Nordic (and actually at least in part shamanistic) magic, called Seiðr, that is mentioned in a number of poems like the one Sophie is made to recite. No idea if anyone ever tried doing anything like that for real, but it was fun to create a coherent magic framework of my own out of all that largely forgotten stuff that is still about.

I found one, I found one!!! "Verleihnix", or how do you call the fishmonger from Asterix's village? Great piece of work, this one.

That's right! His English name is Unhygienix, while in the French original he's called Ordralfabetix. I forgot what he's called in the Platt, though.

Wow! This page must have taken a long time! I like how well thought out you have all of this comic's lore. I also like all the little details you include in the background like the drunk duck.

Heh! Thank you so much! You guessed right: it HAS taken a long time. Moving house in the middle of it didn't improve matters either.