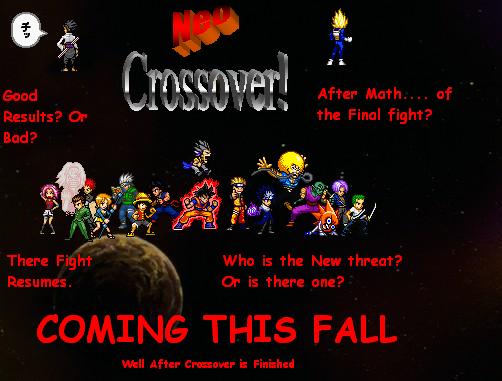 Note This comic is a Teaser for the My Late Coming Comic Neo Crossover. This will start when Crossover is finished and will be started sometime after Summer mabye fall depending on when Crossover is finished. New Charecters and New Villens. The Plot I can't say until Crossover ends. If you can spot two new Characters. One from DbZ and the other from Naruto. Don't worry guys more New Charecters will appear during the comic ( I hope)
All I can say is Guys/Girls guess and make some theories about it or give try to shoot some ideas and before you Guys ask if this will become a Trilogy…. no. Crossover was only planned for 2 part series. So after this one Crossover will be done mabye a spin off series ::wink::…. but yeah. Hope you guys like this teaser

Using the Banner as a Front Cover is very poor. It is utter lazyness. It only takes five minutes to create a cover and that's with implicating effects. I gave you a three instead of a one as although the cover is your banner, it at least organised to an acceptable extent.

Wow this looks cool can't wait 'till comes out :D

the it sould be ever anima villain