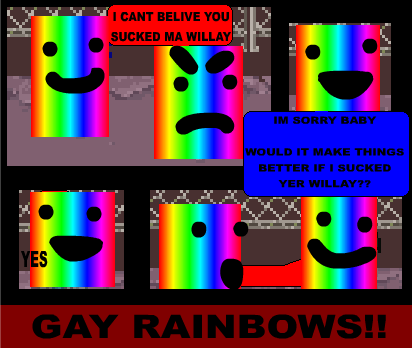 THE "SERPENT" AND THE RAINBOW

Our sample today is “What is life?” According to the author, life is actually a generic journey between two anthropomorphic hedgehogs exchanging awful dialogue. No wonder the suicide toll has sky-rocketed!

Move along people. Nothing to see here but an obvious troll.

Your a saint, and a visionary. Bless you.

Also this shit is hilarious. Fave'd.

Hey, you want to parody shit? Tis all cool as far as I care. Everyone loves a good spoof, except for cunts like Connorth. Fuck that little turd. He doesn't represent shit no matter how hard he tries.

People will kill you if you dare ripoff any of the MG mods. These people are the best of the best because they try hard to amaze people. You just make lame jokes.

Oooooh! Thanks for the future resources, smelly!

If you think your so great then go post your comics here. http://www.mgcomics.com/forum I'm being nice compared to the people at this website.

If those insults are the best comebacks you have then you really are hopeless. I would like to know what form of reasoning has driven you to make comics like this. You obviously have mental issues. That also brings up the question about your intelligence factor.

Yeah, you're poor too! Get a job, smelly!

If I had a million dollars for every person who sucks more then you, I would be broke.

I'm sorry, I seem to be having trouble reading your comments. Probably because your stank fumes are fogging my field of vision! SMELLY SMELLY SMELL BAD!!

That was one of the most n00bish things I have ever heard. I'm not done yet as it seems. This comic is just an excuse to mock sprite comics. I don't think you understand how much work people put into making these comics. I also find your lack of respect to be stupid. I wish that people like would would find some other hobbies other then mock the hard works of others. I made the origanal "What is Life?" comic and the fact that you use crappy jokes too make people laugh just disgust me. That and your guess that sprite comics are stolen disgust me even more. Some (like me.) make their sprites from the ground up. I also find that your comics lack all forms of comedy. I'm surprised the Admin even lets you get away with this crap.

And you need to stop smelling bad! Take a shower, smelly!!

You need to give credit to the people you ripoff. That and the fact that you are making me mad with your disturbing comic attempts.