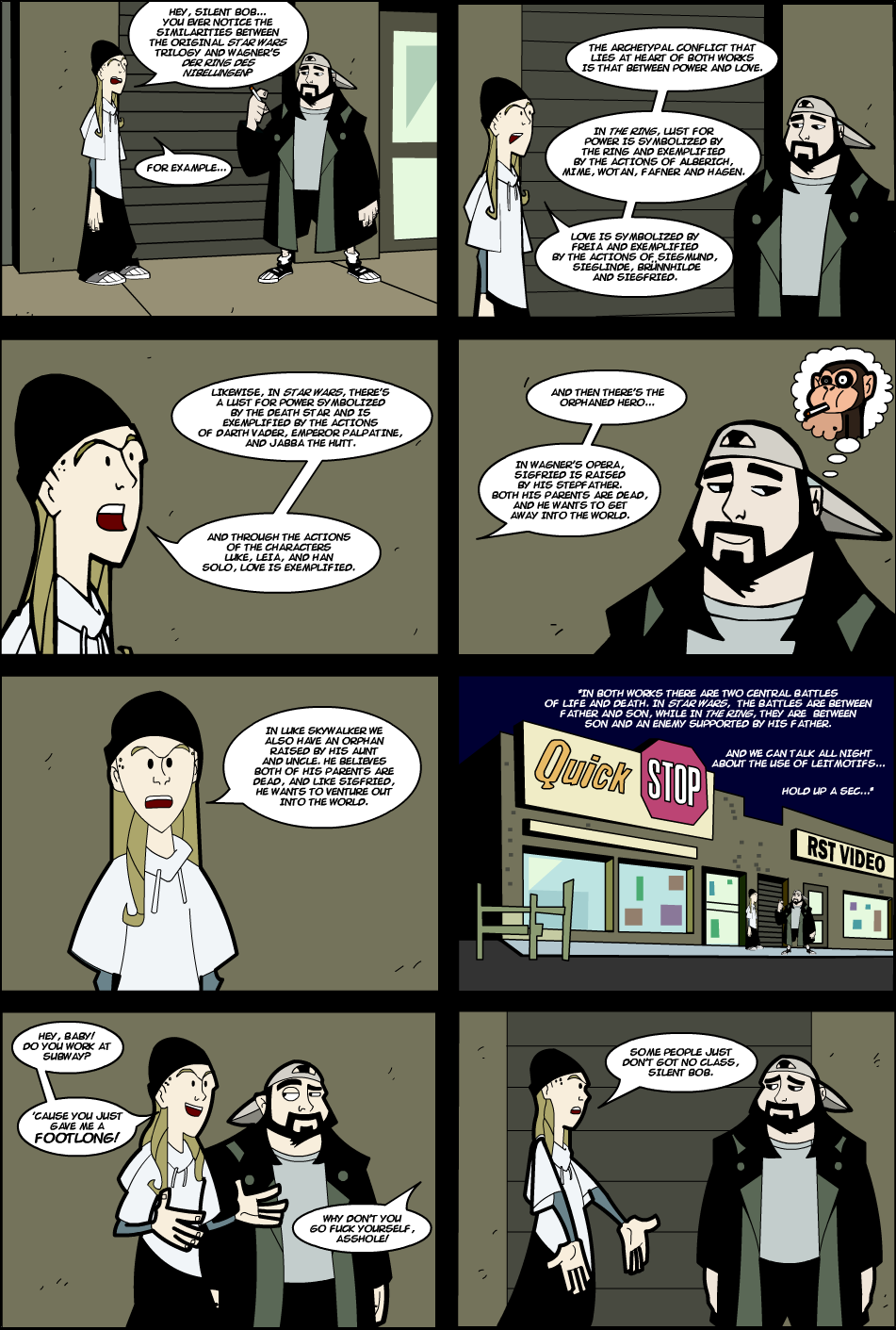 Bet you didn't think I'd get all “cultured” on your asses, huh?

Der Ring des Nibelungen (The Ring of the Nibelung) is a cycle of four epic music dramas by the German composer Richard Wagner. The operas are based loosely on characters from the Norse sagas and the Nibelungenlied. The works are often referred to as “The Ring Cycle”, “Wagner's Ring”, or simply “The Ring”.

Wagner wrote the libretto and music over the course of about twenty-six years, from 1848 to 1874. The four operas that constitute the Ring cycle are, in the order of the imagined events they portray:

The plot revolves around a magic ring that grants the power to rule the world, forged by the Nibelung dwarf Alberich from gold stolen from the river Rhine. Several mythic figures struggle for possession of the Ring, including Wotan, the chief of the Gods. Wotan's scheme, spanning generations, to overcome his limitations, drives much of the action in the story. The hero Siegfried wins the Ring, as Wotan intended, but is eventually betrayed and slain. Finally, the Valkyrie Brunnhilde, Siegfried's lover and Wotan's estranged daughter, returns the Ring to the Rhine. In the process, the Gods are destroyed.

And I'm sure, The Ring has more in common with The Lord of the Rings, but those movies suck noodles. (Cue the hate mail.)

BONUS: 1957 saw the premiere of the Merrie Melodies cartoon short, “What's Opera, Doc?” The film features Bugs Bunny being chased by Elmer Fudd through a seven-minute operatic parody of Richard Wagner's operas, particularly Der Ring des Nibelungen (The Ring of the Nibelung) and Tannhauser. It is sometimes characterized as a condensed version of Wagner's Ring, and its music borrows heavily from the second opera Die Walkure, woven around the standard Bugs-Elmer conflict.

Originally released to theaters by Warner Bros. on July 6, 1957, “What's Opera, Doc?” features the speaking and singing voices of Mel Blanc as Bugs and Arthur Q. Bryan as Elmer. The short is also sometimes informally referred to as “Kill the Wabbit” after the line sung by Fudd to the tune of Wagner's “Ride of the Valkyries,” the second opera of The Ring.

Check it out here.

It's funny how in the panel with Silent Bob thinking about the monkey, the thought balloon makes the monkey look like he has three breasts. And that Subway pickup line? I actually used that in real life. I'm using my own scripts now, so the comics shouldn't be as long as last week's. But you never know…

See ya next week!


Oh, and I know a few of those German names were supposed to have umlauts (the two dots over them, but I don't think there's a way for me to show them in this comment box. Oh well.

I am so using that line!

I know nothing about opera, I am a culture-less peon. But I commend you on your dope monkey ;0)

Yes, it is all drawn in Flash with a mouse. Yes, it is time consuming, which is why I try to space out creating these over the course of a week. This one I did on Saturday and Sunday, though.

Perfect execution. It's rare that a comic makes me laugh out loud. Also, you draw all this in Flash with a mouse? Dear God man, isn't that time consuming?