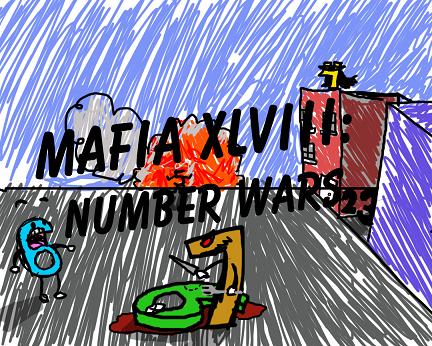 That's right people another mafia game hosted by myself. In case you didn't know Mafia is a forum based role playing game where players usually play the part of villagers or mafia members who are fighting over the control of their town. This is a turned based game
where each turn takes 24 hours and alternates between day and night. These turns are called cycles. Cycles will start around 8pm PST (4am GMT). I will give fair enough warning if this deviates.

This mafia game has customed rules so if you have never played before don't worry the regular players are just as new to this as you are ;D Instead of there being two sides it is everyone against everyone. Players will be asigned numbers at the beginning of the game. These numbers will be 1 to the number of players. If we have 15 players the numbers will be 1-15. This game everyone has the power to kill. To attempt to kill a player you will send me a pq telling me that you are attempting to kill so and so. If you have a higher number you get to kill the person. If you don't you failed to kill the person. Now I know what you are thinking, If I get stuck with a low number I won't be able to kill anyone. That is why at the end of every cycle the numbers will change. Each number except for the highest will go up by one. The highest will become the lowwest number.

Also in this game players will be able to form their own alliances. To form an alliance every player in that alliance has to pq me with a list of everyone else in the allliance. Alliances have a max of 3 players. Fell free to betray said alliances. I'm limiting the number of alliances you can be in to two. You win the game if you or your alliance are the last ones standing.

There are a few other things but this is the main points of Number Wars.

It says each number goes up by one, so in your example 1, 4, and 6 would become 2, 5, and 1 respectively.
Don't take any of the above seriously. It is in my nature to joke.

On a more serious note. Thank you to all the mafites who are participating and voting in the Drunk Duck Awards…

Niccea wrote:
I have doubts, but I'm in.

You and me both.

For more Harkovast related goings on, go to the Harkovast Forum
link
Randomdudeperson at 9:41AM, Sept. 20, 2011

(online) posts: 611 joined: 9-20-2009
harkovast wrote:I am signing up!But I fear I won't win, since i am well known for being the number 1 mafia player, I will invariably not be able to kill anyone.

(online) posts: 5,198 joined: 10-12-2008
And just incase I haven't pestered everyone enough…
Remember to vote for Harkovast in as many categories as common decency allows in the DD awards this year!
http://www.drunkduck.com/forum/topic/174605/
Thanks for any and all support!

(online) posts: 5,707 joined: 8-10-2007
And don't forget to be nice and sign up to judge, present, or both…
Or I'll make like the army and start drafting…
Starting with the mafia…
Just kidding…
Starting with the unlucky son of a gun that has the first picture on my friend list.
Empress/Godmother Niccea has spoken.

Anyone that fails me gets whacked.

harkovast wrote:
I am signing up!
But I fear I won't win, since i am well known for being the number 1 mafia player, I will invariably not be able to kill anyone.

That's another rule that I left out. 1 can beat the highest number.

(online) posts: 5,198 joined: 10-12-2008
Rokulily, I will be playing but true to my usual form, I won't be playing very well.
If 1 can kill the highest number….that means 1 and the highest number are the only two people able to simultaneously kill each other (or at last attempt to do so.)
Oooh look at that! I'm thinking about what the rules mean! Almost like a proper player who understands whats happening. It's those kind of moves that will throw people off the sent of the fact I have absolutely no idea what's going on during this game.

For more Harkovast related goings on, go to the Harkovast Forum
link
ayesinback at 7:13AM, Sept. 21, 2011 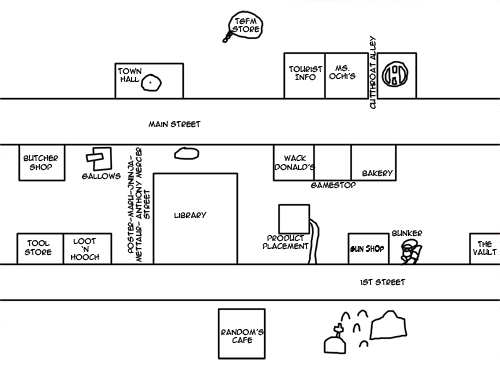 But besides the point, I wonder why I've never bothered to add a store of my own to townston…I mean…why haven't I…
My YouTube Account | My Forum | SYAIMLNY the Comic
link
Niccea at 6:50AM, Sept. 25, 2011

The map comes with the CYOA by the way. I got the first four pages up. Going to update by module.