(online) posts: 770 joined: 1-13-2007
Stone Torch was originally created by SUX in the thread at http://www.theduckwebcomics.com/forum/topic/175518/.   (There's some discussion there too).
Original Description: Stone Torch- An ancient carving of a Samoan fire god who is awoken by a young boy and they meld into one being by holding onto the necklace of the fire god and chanting his ancient name.

As discussed in that thread I've come up with some art for the character.  I've also riffed off his original description and come up with the following origin. (Note that the Samoan fire deity is a goddess not a god and this reflects that).

The origin of The Stone Torch
Once, in the fire mountain, there lived an old woman/goddess/witch named Mahuika who possessed fingers of flame.  Mahuika's grandson, Maui was curious to a fault and wondered as to the source of her flame.  One night he extinguished all the fires of the village so he would have reason to visit Mahuika and beseech the fire of her.  Mahuika was pleased to have a visitor after all this time, especially family, and granted him one of her fingernails to reignite the village flames.

But Maui's curiosity overcame him.  He wondered, if Mahuika ran out of flames, *then* where would fire came from.  So he extinguished the fingernail in the stream and returned to Mahuika for another, crying accident.
At first Mahuika was patient, gifting him more of her fingernails and even toenails but eventually suspicion and anger kindled within her as she realised she had been tricked.  She threw her last flaming toenail at Maui but missed, the toenail flying into the trees.  The trees cherished this fire as a gift and held it within themselves for the villagers to bring out when needed.

In this way Maui brought fire to the world.

Following the theft of her fire, Mahuika was despondent.  Eventually one of Maui's descendents, whose name has been lost to time, took pity on her and brought her fire to reignite her flames.  Mahuika was so delighted to be whole again that she granted the man a boon.  If ever he, or his family, were under threat then she would come to their aid.  She gave the man a sacred necklace of whale tooth and obsidian to seal the pact.

Many centuries later in a land called “USA”, there lived a thoroughly modern young boy called Mika, (though he called himself Mikey to the world).  Sometimes he dreamed of being a superhero but he believed not in the myth and superstition of his ancestors.  Nonetheless, he was descendent of Maui, and he possessed the necklace.  So when muggers tried to take his life, Mahuika honoured her boon and responded to his need.

Mahuika found herself unable to appear in the world so far from home but would not forsake her boon and found a way that had not been tried before.  She manifested through the body of Mikey who was shocked to find his body transformed into that of an eight foot tall stone fire goddess - Mahuika.  The irate goddess made short work of the muggers while a stunned Mikey looked on from within.

But her unprecedented action of manifesting through Mikey had unexpected side effects, establishing a permanent link between them.  Mikey and Mahuika's minds shared her body - a situation the goddess found very distasteful.  Although Mikey reverted to his own body, the link between them remained.  And whenever he chose, Mikey could invoke her by touching the necklace and chanting her name, triggering the transformation into her powerful form.
And so an ancient goddess with little interest in the modern world and an idealistic young man combined to form the strange hero the world came to know as the Stone Torch. 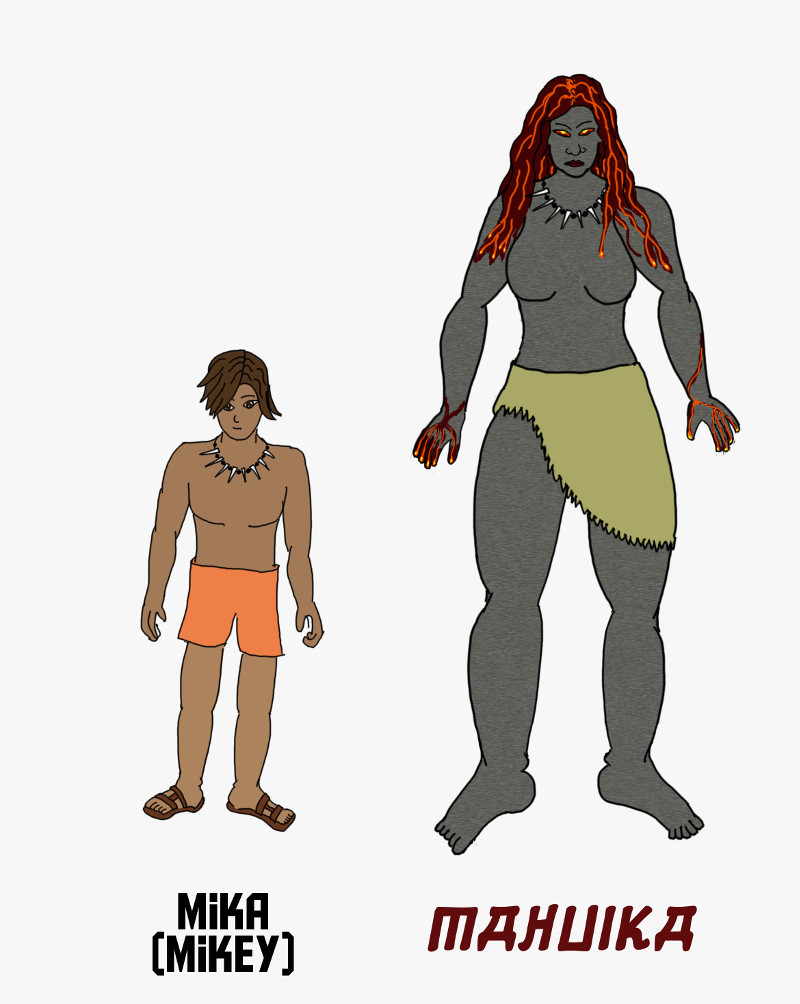 (online) posts: 325 joined: 4-24-2007
I like that origin right there, that was an interesting read and I really want to see how that plays out in comic form :)
Tha designs are really great as well and the design of Mahuika looks pretty close to what I was going for in my mind so I think this looks really top notch.
I like my horror films like I love my burgers…Full of Cheese!!

(offline) posts: 962 joined: 8-12-2020
I have read your article, it is very informative and helpful for me.I admire the valuable information you offer in your articles. Thanks for posting it.. Toronto Iron Railings
link