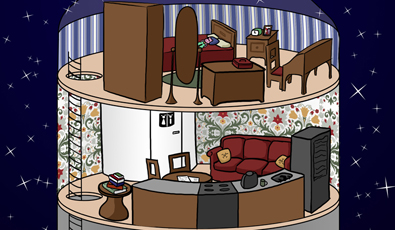 I recently posted the above image (click through to see the whole thing) as an extra in my comic. I drew it for myself after I realized something: I kept forgetting the details.

The positioning and style of furniture are trickiest for me. There were a few scenarios where I had to flip back a few pages to check, say, the location of a table, only to realize I hadn’t been drawing it consistently. I had drawn a loose top-down plan of each floor some time ago, but in classic Hippie Van style it seems to have been lost to the depths of my room.

I took the opportunity to make a better, more detailed version. In the illustration above I did my best to establish the positioning, style, and colour of all the furniture so that when I draw Dee’s ship I can refer back to it. No more mysterious table replacements!

I’m thinking I may also want to create a reference image for some of the main characters. I find it really difficult not to forget details like a character having a nametag or elbow pads.

There are other options, of course. One is not to care so much. I imagine few of my readers are flipping three pages back like “hang on, weren’t her shoes blue before?” The other is to simplify! If something is causing you trouble in your comic, you always have to ask whether it’s worth the trouble. Is that particular troublesome detail really adding anything, other than aggravation? If it is, cool! If not, you’re free to toss it! For main characters, in particular, it’s probably a good idea to keep the character design relatively simple.


Do you keep drawings to refer back to for settings and characters? Or do you have another way of keeping track of the details? Is it all in your head?


I also wanted to add a quick thank you to kawaii here, who switched newsposts with me this week when I lost my cat and didn't feel up to it. <3

There are behind the scenes pages in both comics.

But it also hurt, because it was so well known. It was easier in Interstellar Blood Beasts. There i made up generic background flats and moved them around for whatever scene that was to be done. Only the infirmary, engineering and the bridge were specific sets, but even they used the preexisting flats.

Doing green screen like I did on Tales of SIG had the added challenge that I had to remember what wall was what. I had screenshots of different points of view and angles, but I had to constantly refer to my references to make sure which wall was the opposite one and which image was just a different angle of the previous wall. And I was using a very well known background so that helped because the Star Trek ships have deck plans available.

Film makers and artists have played all kinds of tricks with perspective, movement and blocking. Why can't we? If the layout of a panel means the couch has to move, use perspective and movement of the point of view to camouflage that. I often remove furniture to get the shot I want. Since I do photograghed sets I am often stuck with three walls, but that doesn't mean I can't move them around however I want. And if a character's background is suddenly the "wrong" wall, what's to say he didn't turn around in between panels?

@Usebooks: Your idea about tagging things through wordpress was also part of the inspiration for this post! That's such a good idea for people with a bigger archive.

@Udyr: I wish I had the skills to do a 3D mock-up! I learned Blender years ago but I think it would take me too long to do to be worth it.

@Bravo: I actually have a whole book of fashions planned out for Dee! I'm not even sure if I'll get the chance to use them all, but drawing them out is a lot of fun.

@Ironscarf: I think that's a great point about making it into a real space in my mind. Having drawn this, I can picture myself in the room and how the layout would feel.

@EssayBee: I've done that for previous comics, but for my current one I've just been opening an earlier page to sample the colours from. I love the idea of having changeable "sets"! Backgrounds always take me so freaking long, I have a really hard time simplifying them.

I have RGB color charts for all characters in Fusion. For Dude in Distress, I have large reference pics of poses for the characters which I can use for their base colors. For backgrounds, I usually do 2 or 3 different angles of a "set" (and sized pretty large so it's easily scalable) and drop the appropriate background angle behind the characters. I also keep the sets broken up into lots of base color layers as well as keep various set components (tables, chairs, pictures, trees, etc.) so I can swap out the colors or move/add/delete components to quickly change the "set dressing" to easily create new sets.

I've found I don't overly worry about details as long as the basics remain the same (green car doesn't turn blue next page...), but I do get frustrated when I realize I've made a big gaffe, like when I make a room waaaay to big to fit inside the house I've lovingly detailed from the outside...

I found that working out the precise layout and style of a room is a great starting point, but sometimes that doesn't make for the best composition in a given panel, so now I try not to worry about furniture wandering around on it's own a little bit if I need it to. I think as long as the basic relationships of things are in order readers will accept it. I think they care more about the atmosphere you're creating, so the plans you make are more about turning it into a real place in your mind, which you can then put across better without getting bogged down in too much detail.

Over the years I have gone into great detail how I list and plan everything. I do as much prep work as many movies. I do photo references of all rooms, all costumes and costume changes and put together style sheets and all kinds of maps. If a prop in in one place in one scene it better be there again unless it is something that could have moved in between sequences. And then there is planning variety. I have to consciously plan changes of costume because I HATE when characters where the same uniform scene to scene unless it IS a uniform.

That rocketship interior is super cool! I hope all the furniture is bolted down with strong metal. You are very welcome about switching newsposts this week. :)

I make maps of rooms and areas all the time for reference. Mostly for reoccurring places and things. Often I will go to great detail (then not use it).

Done this so much first comic I made I decided be better in the second but it's still such a challenge. I agree lanning the layout is really a good idea like usedbook said or make a 3D figure of it if you got a bit knowledge about it. But stupid details is hard. Like items. It's better to not do too much details in each panel is what I learnt. Not more than you could remember anyways XD

I had character references but still allowed them to morph a bit over the years. I could see both ends of the spectrum as far as background sets...having a strong sense of space and the layout and furnishings seems like a good idea, especially for a story set largely in one place, like Dee's ship. On the other hand, one could just do whatever backgrounds work for each page or panel. I remember "the mystery door" in the Simpsons house, and their occasional use of rooms that only exist for one scene. Interesting post!

I often make blueprints or maps. But I've found a more useful trick through WordPress (Comic Easel) in tagging characters and settings, so I can quickly see all relevant pages at a glance. Very handy to reference layouts, color schemes, which side a scar is on, etc. (I also link my tags to character bios, so I have a quick reference to jump from.)