No Hugging, No Learning 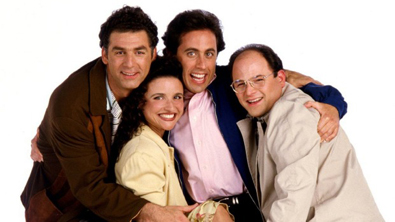 Recently I wrote a throwaway character for my comic based on a real-life friend of mine. In short, he’s a loveable misanthrope. And because he’s based on a real human being, I felt like I owed the character something: he won’t grow, or change, or become a ‘better person.’ Maybe there’s more to him or he’s marginally more pleasant than first impressions made him seem, but that’s really more about getting to know the character than having him evolve. Essentially he comes in as a grump and he leaves as one.

Just like I would never suggest that his real-life counterpart ought to be more sociable, it would be patronizing for me to decide that that would somehow make the character better or wiser. People are complex and they don’t all need to be the same.

And actually, this is something I’m thinking about a lot while writing my comic. As far as I can manage it, characters don’t magically become better because they’ve come in contact with my protagonist. Dee isn’t just a neutral observer of the places she visits, but she isn’t travelling through universe fixing people and civilizations, either. She might leave things better, worse, or just different, if she changes anything at all.

This is a personal preference: there’s certainly a place for ‘growing as a person’ in dramas, but I get annoyed when comedies start getting too preachy on me. In some ways, I try to keep in mind the Seinfeld rule: No Hugging, No Learning. The difference is, of course, that my characters aren’t terrible people to begin with. Dee has good intentions, but she’s not Captain Kirk.

I also think there’s a middle ground to be had between Seinfeld’s cynicism and the sappy moral realizations of countless other sitcoms. Dee herself might learn lessons, but they’ll probably be about flaws that were obvious to the reader. In other words, I’m not trying to teach my readers any lessons, because I don’t presume to have any great knowledge that they don’t.

What do you think of the “No Hugging, No Learning” rule? Does your comic have a moral lesson for your readers?

Fantastic stuff, Hip! I heard about that edict from Larry David about hugging and learning. And I agree with you that there's room on the spectrum between that and the sappy/preachy sitcom types. I have a similar outlook to you about not trying to teach lessons to the READERS. I think that's where a comedy can get annoying. I'm not much into learning for my characters. Maybe a bit, gradually, they'll grow up. But I definitely am a sucker for sweet moments. So there's plenty of hugging (hopefully leavened by enough humor and a spoonful of cynicism).

I'd forgotten that 2.4 children thing! I never saw After Henry and didn't realise Prunella Scales was in it. Probably won't invest in the boxed set! The stuff I remember from the 90s was more like Alan Partridge, League of Gentlemen, Father Ted, Fast Show, Smack The Pony and the hugely underrated Brittas Empire.

@Scarf- 2 and a half children... And there were a few other super annoying family sitcoms... Actually, I'm wrong. That happened earlier in Britain: After Henry. Gahh!!

As for my stuff just look at how the Robofemoids have evolved over their three comics.

It is really unfair to expect a character to grow in series comedy especially over a 23 minute episode. One could grow over a season or multiple seasons as situations change. But as usedbooks said even if a lesson is learned most people revert to earlier behavior. The Beaver will always find trouble to get into. Dennis the menace will not become a well behaved child no matter how many times he sits in the corner. But it is another great comic trope to have the character try the same thing in a slightly different way because they "learned their lesson".

"No Hugging" could be a Bruno catch phrase. As far as growing and changing, I'll leave that to the politicians(tongue fully in cheek). I think comics can deliver poignant or thought provoking emotions with one panel without having to build up to it or devote whole plots or characters to it. Look at Calvin and Hobbs, or Charlie Brown. one minute they're contemplating life, the universe, and everything. The next panel, they're trying to kick the same damn football or fighting with a stuffed tiger. The only time you should have a moral or character growth is in a single shot story situation with an ending, because once the Tin man learns he's had a heart the whole time, it's back to Kansas and roll the credits.

@bravo: I couldn't agree more! The unchanging, obviously flawed character is a comedy staple. It's hard to have a comedy character evolve and still be funny.

@usedbooks: I think you're spot on about characters often revealing things rather than evolving.

@Ironscarf: I should be clear that I LOVE Captain Kirk and everything about TOS. But his style definitely has its proper place.

I love playing with characters, so I have a ton of them, all different. I like them all to be multidimensional, so they have parts of themselves they don't share or show as much as others. I don't have much actual "change." To be fair, I don't think "character growth" exists much in real life adults. People cling to their personal world vies often in spite of overwhelming evidence that they are wrong. A realistic story about adults is not one of growth. (Although, it is fun if they manage to confess, share, or accidentally reveal aspects of themselves they usually deny or keep hidden.)

Ozone, I'm trying to work out which 90s British comedies you've been watching? Red Dwarf? One Foot In The Grave? Ab Fab? Bottom???! I think a character should learn something by the end of a story, but if the writer is trying to beat me over the head some kind of moral lesson I'd prefer they went into politics or something. Learning something could be discovering your husband was the murderer and your entire life was based on a lie for instance. I actually don't mind Captain Kirk and his crew though. Maybe it's because they are all personifications of some concept or ideal and don't hug that much. Except for Captain Kirk, but I don't think that's about inner growth.

Hugging and learning was all those family comedies going back to Leave it to Beaver. He learned his lesson, hugs all around until next week. All in the Family had a dysfunctional family dynamic but even that got all hugging after Archie had had all his lessons in tolerance. That's the difference between family comedy and adult ensemble comedy. Was there any character growth on Dick Van Duke? How about the first Newhart sit-com? In the second one the bitchy one caught on eventually but the rest were just as twisted in episode one as they were in the series finale when Bob found out it was all a dream and he was still married to Suzanne Pleshette. Without the Bob Newhart Show there never could have been a Seinfeld.

Yeah, it's a trope of it's own. I love the 'Johnny Bravo' cartoons. Johnny just doesn't get it... and that made the cartoon! He thinks he's a Masculine God, and that Women worship him... This despite the fact he fails over and over in trying to pick them up!! Even he ever learned, or tried to be different (softer, kinder..) it would have ruined it for me!!

Which is not to say I haven't had character growth in my comic. I rejected one storyline, at first, because it would have broken one of my few happy, committed couples. Thinking it over I decided it was a good story, so I did it, and hearts were broken, a couple broke up, and one character suffered a tiny amount of character growth.

I do an adult comic. I think the only lessons my readers want are immoral ones. ;-)

I agree with the no hugging or learning thing. It is AMAZING when done right like in Steven Universe where the engage you comedically and emotionally, but in the vast majority of things it's usually always so sappy and forced in a nasty, too-sweet false way: Saccharine glurge.

Back in the '80s pretty much all comedies were about hugging and learning... That probably started in the '70s. Shows like Mash, Good Times, Maude, Everybody loves Lucy... and many more had an emotional side, some more than others. So all the BIG comedies of the 1980s followed that, till Married with Children and then Seinfeld broke that mould -in Britain though it wasn't till the 1990s when their shows started going emotional like the US! Before that they had shows with "nice" characters (ie the good life), but they weren't huggers or learners.

Characters who do not change and who never learn their lessons are a great comedy staple. What would it do for Lucy to finally stop trying to get on Ricky's Show? There would no longer be a Honeymooners if Ralph finally learned to keep his mouth shut. Seinfe6was in the Great tradition of such classic comedy. The Great Gildersleeve will never clean out his closet no matter how many people get buried under its contents. Once the comic character changes the show is over. A show about nothing cannot evolve, it must remain nothing so that the characters' foibles can continue to entertain. Great topic. Always insightful.