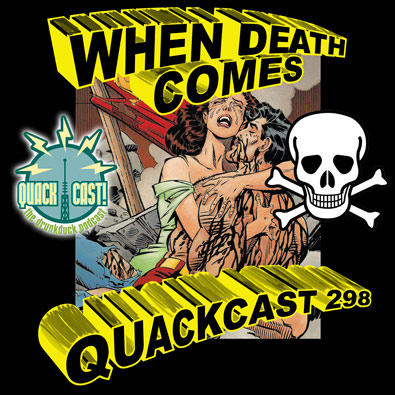 This Quackcast was based on Tantz Aerine's newspost from two Saturday's ago: Death in comics.
We lightly expand t to death in all pop culture in the Quackcast. It's an interesting topic! Not the one we were originally going to do though… We were supposed to all have pizza and interview VinoMas's Princess January, but no one got pizza except me and I gave Vino the wrong time so he didn't show up, hahaha! So that idea… died.
Death in comics can be used a whole lot of ways; a promotional technique as in Superman, a way to get rid of superfluous characters, to show gore and a massive body count, to create tragedy and pathos, the create comedy and laughter, and more! We give examples from our own artwork as well as mainstream comics like Maus, Judge Dredd, Superman, When the Wind Blows, nd even great webcomics like Charby the Vampirate.
Banes could not show for this Quackcast. He is NOT dead… not yet.
Gunwallace is right there back in action and the theme he's given us this week is Ectopiary! It's darkly threatening and vaguely classical, a creeping, scary exploration of dark places.

Based on Tantz's newspost:
When Death Comes - http://www.theduckwebcomics.com/news/2016/nov/10/when-death-comes/