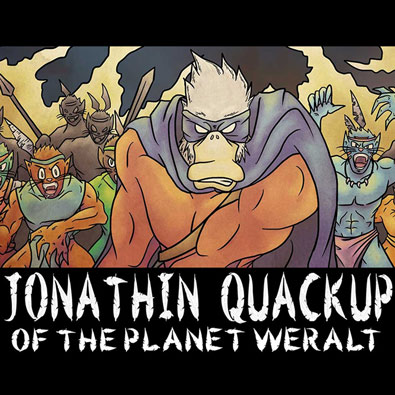 Jonathin Quackup has had a very adventurous life! There's battles, war, journeys, fierce warriors, hidden destinies, and even fishing! The creatures of Planet Weralt are humanoid animals, they live in a series of rival, warring communities. This is the story of how the legend of the great adventurer
Jonathin Quackup began, as he was chased out of his home and moved to a new kingdom to start again with his family… Jonathin Quackup of the Planet Weralt is a fantasy story almost in the style of a biblical tale; there's a bit of David in there, a bit of Moses, the Exodus… it's very interesting! The art is consistent throughout, abstracted and stylised, but pleasing.