What You Care About the Most 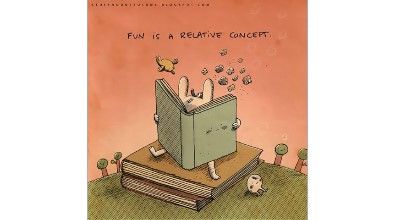 I’m feeling more philosophical today than anything, so I’m going to share.

But so many of us do it- professionals and hobbyists alike, we still keep at making comics and often a single project takes years to complete, but it does get completed.

So what is the allure of it, why do we keep at it still?

In my case it is therapeutic. It helps me think while I draw and puzzle out expressions or backgrounds or angles. It helps me with my emotions too, of happiness or of sadness or of anger. And finally it helps me share through a story things I would be unable to share in a relatable way otherwise.

So I think that as long as I have eyes and hands, I will keep at it and strive to get better at it and share everything I discover in this journey.

And yes it was my birthday today and now it’s after hours, and I just get mellow like this sometimes. So cheers!

And feel free to share what making comics does for you!

I'm a masochist. I like the self-torture of waiting for blood to form on my forehead so I can spread it across a page and create whatever it is that I'm doing. I love telling stories and what's the point of telling a story if you can't share it with others? So after years of searching I settled on this medium. My right hand and arm are so far gone that drawing is agony but I can manipulate a mouse.

I'm not sure what motivates it in me, exactly - but the momentum can dissipate if I let it...and it has! With too many other things going on, the comic making slowed to a crawl. I'm putting other series ideas together and working on writing/drawing skills, and researching in the meantime. I definitely feel at loose ends when not putting stories together. Great post, and Happy Birthday!!

I make comics because I love reading other comics, I thought it would be great if I could give that joy to someone else.

First off, Happy Birthday! I think making comics is an itch I have to scratch, or I'd become miserable.

Well, almos a year ago I 'started' to draw. After a long, long break (from almost 15 years!) I return to my desktop, gathered some supplies and start over like if it was my first time, but it takes me no time to make up all those years and get my style back again, it was only matter of time to polish it. But then, the real deal is to make a story and tell it through my art. So I wrote a little script and start a 'one-shot', 5 chapters and it's over (that was what I thought XD), but now I've got true colleagues who read my story, and that it's my most important 'fuel' to continue. Because of that I'm making my manga deeper and with more chapters :D Excellent topic and answers!

Great topic...! And I don't think there's gonna be a single answer for anyone! I've psychoanalyzed myself and wondered why I would create a story... I sometimes wonder if the 'real world' just doesn't do it for me like it does many people. Still, I love interacting with the real world, real people, music, nature... so I know that can't be it (or at least all of it). Yet, I know I love the idea of 'worlds with different rules' (sci-fi, supernatural, horror...). By far my favorite books and movies are in genres like that. I think part of my drive is that, if I can't have such world, I'll make my own! Maybe... sorta... :D

When you can't express your feelings and thoughts with words, express them through art. That's my motto and that's why I create. It also makes me feel that my life means something because of the thing I created. And I love this thing, maybe more then my own Life. It might not hold any value for anyone but me, but for me, my creation is something I couldn't live without.

For it's my way out of reality since I was a kid. I suffer from manger depression and at the time no one really took it seriously enough that my only therapy was to draw. Granted the comics were messed up in a way that if I was often to dead inside it showed up in my old works a lot. But it kept me sane enough that gave me not only some outlet but gave me people to talk to so I didn't feel so alone. Although I did have to take a long three or four year break due to complications I did loose all the people I talk to so I am often silent and that feeling of being outside exist even in comics now. But I am still struggling with a lot of emotional issues I still draw for the same reason it's my small world of an outlet and sometimes I get a few comments and they make me smile. So I draw because I have a story I want to tell even if very unpopular they maybe I want to finish them. and they are my therapy and a way of expressing emotions with picture and art .

WOW, interesting question... this one hits home. For me it's a weird compulsion. Maybe habit?

In my case the webcomic is part of my addiction. I'm addicted to stories. I spend my money on books and movies. I download games based entirely,on storyline, regardless of gameplay. At work, I am a (non-fiction) storyteller. Used Books began when I ran out of episodes of my favorite show and was desperate for new plot. The comic format is because no one would read my prose, and stories are more fulfilling when shared (original plan was to just share with my roommates). I also go crazy with boredom when not producing something. (I used to build pointless websites and mod video games.)