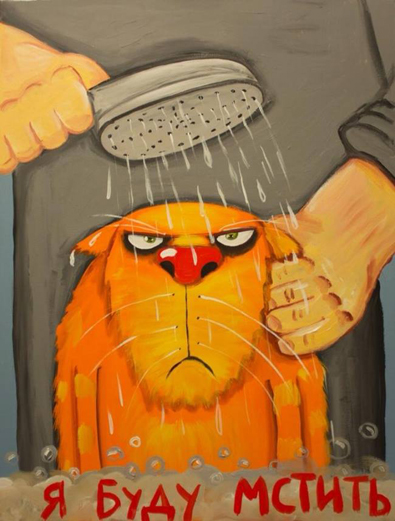 A little comic by Vasya Lozhkin: “I will take revenge”

Earlier today I was reading this article about an immigrant to Canada who learned English with the help of comics, and who now creates comics himself. It got me to thinking about what a great resource comics are for learning a language!

Currently, my life is more or less devoted to language learning. I made a tough choice last year when I was deciding what to do after finishing my bachelor's degree. I've been enamoured with Russian and Soviet history since high school, I never had the opportunity to learn the language. Unfortunately, most history MA programs have a language requirement. I could study American history which I also enjoy, but I decided that having to learn a language was a dumb reason not to do what I really wanted to do. So I found a private tutor and started studying, hard, every single day. I'm tremendously proud of the progress I've made since I began learning last spring. I'm currently reading Sherlock Holmes in Russian; very slowly, but without too much trouble.

Since the beginning, comics - along with cartoons, jokes, and memes - have been my best friends. The biggest reason is pretty obvious: the accompanying images provide context clues that help me to decipher the text when some of the words (or grammar) are unfamiliar. A page full of text and pictures is way less intimidating as a language learner than a solid block of text. Children's picture books achieve the same thing, but one of the most frustrating things when you're learning a language is to be stuck with content that is WAY below your maturity/interest level just because your comprehension level isn't up to grown-up stuff yet. I always had the same issue when learning French in school, as well.

As I improve, I also find that comics are useful for learning how language is actually used. Provided they're decently written, comics tend to use colloquial language, natural speech patterns and daily expressions that you might not learn from a textbook.

Comics are also just plain fun. My Russian teacher sends me goofy comics, articles, and jokes on an almost daily basis because he wants me to associate Russian with fun. That way my constant studying isn't just hard work and memorization.

Are any of you learning languages, or have you done so in the past? Have you ever read comics in a language other than your native tongue?

Dragonsong12's comic Twisted Mirrors is coming to an end after several years!

From Dragonsong:
“It's a comic that started in the early days of DD and survived through a couple of full site wipes, but I stuck around because overall, DD's been a great place and I'm not sure I ever would've made the end without you guys!

I'm planning a sequel as well, which I've already started work on, but I'm not sure when it will start posting. ”

Kyupol's comic MAG_ISA is updating again and has his 800 pages!

Comics are great for language teaching, as I well know. They're an elegant way to help students get to know a language the way it really is, and not just the way it is presented in textbooks. They also make it easier to incorporate topics that are really interesting and fun, because the artwork helps a lot, i.e. topics other than "John is cleaning the blackboard. Mary is reading a book. - write a short paragraph about other activities in the classroom you know." ;) It's tricky to choose the right one, though. What I've seen most used in German English classes are syndicated newspaper strips, like Garfield, the Peanuts, Calvin & Hobbes, and so on. They're cheap to get, you don't have to explain who the characters are, and, above all, they're short. Plus, in most cases - with the notable exception of C&H - you don't ruin the kids' potential delight in good comics, if you accidentally put them off of these strips for good.

@oz: A third language for me! My schooling was in French. Although I feel like that doesn't quite count because it's a lot easier to learn a new language when you're four.

Learning a second language is a magical superpower.

@KimLuster: Learning a new language is super fun! It's like magic when things start making sense.

@Amelius: Interesting! I'll have to look into that!

@Спасибо большое! :) Speaking with native speakers is definitely essential. Not too many Russians where I live unfortunately, but my teacher is a native speaker and forces me to do lots of talking.

What a wonderful concept - one I've never even considered... I might just give this a try... for fun!

Oh yeah there's something to that in fact, early comics made for newspapers were designed to get immigrants who didn't read English well (or read that much at all) to buy the newspapers!

If you want to learn or train your Russian by comics you may try this site. https://acomics.ru/ It's the biggest archive of webcomics on our language. Also there lots of translations so you'll be able to compare original versions with translations. As for me(as Russian who learns English) the best and fastest way of education was speaking with and listening for people who have English as their native language.