Where do you get your design inspiration? 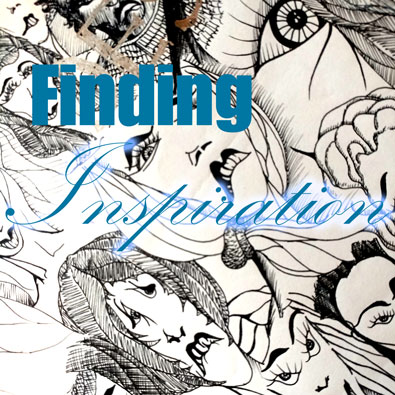 When you're just starting out, coming up with good designs is pretty simple, but when you've been doing it for a while or it's your job, you run out of easy ideas- you've picked all the low hanging fruit. What do you do then?
This applies to artists, comicers, graphic designers, writers, poets, anyone really…

You start out when you're young with a huge store of influences from all the things you've seen and experienced up to that point, all the stuff you like as a kid goes into your inspiration fuel tanks so that when you start arting you're drawing on that. You have the false idea that your inspiration is infinite and all self generated, that you're creating from the golden well of creativity that's inside of you… in reality that well IS exhaustible and it wasn't self generated.

So what happens then? There are a few things you can do. One is to just go out and get more: refill those tanks the same way you did as a kid when you didn't even know you were doing it. Consume media, read books, listen to music, see a concert, go on dates, read comics, watch TV and film, travel… try and remember to consume ALL of it and recall the things that excite you most about those experiences or that affected you most: THAT is your fuel.

That'll help you with general inspiration but what about the current project that you're working on RIGHT NOW?
Well you can't go off and travel and do all that crap every single time you draw a new picture so there are other strategies you can try.
You can look at art that's similar to the thing you want to do and see how THEY approached it. Listen to music that evokes the feeling you want to portray, watch a film with a similar vibe, read stories that cover aspects of the same thing you want to do to give you new ways of seeing it. Even physically locating yourself in a different space can get you going: go to a cafe, the beach etc.

Which brings me to research.
Researching the hell out of the thing you're working on is a great way to help you get better at working on it and giving you new ideas. But beware because that can become an end in of itself- don't get carried away! Collect photos, learn about your thing, watch documentaries, YouTube videos, buy props or items related to it… but always keep in mid what you're collecting these references FOR.

Fresh eyes.
This is a good technique. If you look at a design too long it becomes stale or twisted in your mind. You need to take a break from it. Whether that's for an hour, a day, or a week doesn't matter, you need to come back with fresh eyes. Work on something else for a while. Doing two projects at the same time is a good way to be more productive too.
Two very simple approaches are to stand back from the work (or shrink it down when working digitally), or to look at it in a mirror (flip it). Simple, but helps you see it with new eyes.

Other people.
Speaking of fresh eyes, one of the best places to come up with new ideas for something is other people.
Show your design to others and get comments or just chat with them about your ideas and bounce things off each other. You'd be surprised what a huge help that can be to get you moving forward.

Sketchbooks and notebooks.
During your day you'll come up with all sorts of great ideas; RECORD these! Draw them, take photos, write them down, record the sound, record a memo, film it on your phone, take photos. You will build up a huge store of what you need. But it's not just about recording what you see, hear and think of, you often create NEW cool inspirational ideas to save for later just by playing around. Some of my best drawings started as idle doodles in a page. Great stories can come from just a few rambling lines of text. Great music can come from some random beats you started tapping out with your fingers.

Art from chaos.
And this in my final and most interesting bit of advice on where to look for inspiration. When I'm stuck for ideas and a design just wont work, what I do is make a total mess out of all my design elements, I throw them all together and stack them randomly. Then I go away, come back and look for a new layout within that mess. It never fails to give me a great new design. I like to think of it as outsourcing my creativity to the universe but in reality I'm just tricking the pattern recognition part of my brain into making its own connections.
And before you bring up the left brain/right brain stuff… ahhh, that's a myth, SORRY.
The frontal lobe is what makes informed decisions and sorts things out, but that's not what's going on here at all, pattern recognition is a basic part of our thinking; it's how we recognise faces, expressions, language, music, everything, but it also malfunctions and creates patterns where there ARE none. It's the part of your mind that makes you see ghosts, cloud Jesus, hear voices in static and backwards lyrics. So it's ideally suited to deputise for creativity.

Get out there and create!
What are your strategies?

Goo point about looking at unique and interesting work that way :)

I think what is also really important is to sit back and remind yourself why are you doing it in the first place. Maybe you want to speak your mind through art. Maybe you want to cheer people up with your comic. Whatever the reason is, sometimes we get used to doing something and we forget why we started it. Reminding ourselfes why are we doing it might be a really good inspiration.

Since my comics is all about anger and violance, I often look at things that piss me of before writing and drawing my ideas. When I want to do a scene with heavy emotions to it I allways use the right music as background. Music is a really powerfull thing, don't ever nderestimate it! When you feel drawing your comics is getting boring, I have two ways: 1. Look back at what inspired you in the first place and explore it again, in more depth. 2. Explore unique work, comic that was drawn in different unique way for example. Take a close look what was done differently than usual. Sure you won't change your art style but it might inspire you to try to draw something from a different weird angle, or make more symbolic scenes drawn in slightly different way. Whenever I look at unique awesome work of art I think to myself "That's so cool! I want to create something unique too".

Comming back to my first part of inspiration from when you're a kid- even though you use up that creative energy, those same ideas can continue to drive you and influence you all your life... So they're never entirely used up. They sort of create a default setting for what your future inspiration will be.

My art from chaos method is very, very basic. It can be as simple as tracing around paint splatters to make interesting faces. You often mistakenly see really cool things in the shadows that aren't there, or in an arrangement of words on a page, that you saw wrongly, or even hear a great tune in random sounds for a car engine- instead of dismissing those you use them.

Thanks guys ^_^ Originality isn't something you should worry about (unless you're working in fashion), or even putting a unique twist on things (just don't copy). The most important thing is that it excites you, because inspiration is something that drives YOU to work, not drives you to work for others.

Keep in mind also that there are some tropes people never tire of. You just have to know which ones.

I don't have a strategy, I just observe. I like to play "What if" and twist around things. And since everything under the sun has already been done, don't worry about it. Develop your version and guaranteed it'll be new to someone and totally derivative to someone else. But don't be surprised that when you do something completely and totally original; no body cares or even notices.

I would love to see a step by step example of your "art from chaos" method. That must be fascinating to watch! Great advice all around. I'd say that getting to know something in the world that has been a 'black box' to you (there was a time I knew nothing about Asian countries and nations, and I still know next to nothing about Africa) is always a wealth of new stimulation. It would fall under your "go out and get more" method I'd say :)

Sometimes I get an idea from a new character and I imagine the whole concept for it (clothing, manners, appareance, etc.) and make a rough sketch, then I start to draw it and it often ends in a different way but at least the first step is done. Browsing around in the web, magazines or books helps but, as Kim Luster says, you get a little dissapointed when you find that "your" idea was already "other's" idea, but I don't waste it, if it is good enough I'll make it really mine, adding to it my personal touch/taste.

Fantastic advice!! The one I really need to take to heart is having a notebook to jot down ideas when they come... I sometimes use my phone's memo app for that, but often don't... I'm pretty good at holding on to ideas in my head, but I've lost some really good ones too!! Researching your idea is always good advice, but it also has a double edge! I've fantastic 'original' ideas only to research and find out it wasn't so original after all!! I believe it when they say we really don't come up with new stuff - we just have to take existing and spin it in an interesting way!!

I've never really hear of or thought of that, It sound's like what they do on crime shows. Interesting!

One thing I like to do is clip any newspaper/magazine article or image that somehow relates to what I'm working on and keep them in no particular order. Then after a while I pull a couple out and think "Could that really go with that? Yes, yes it could!".