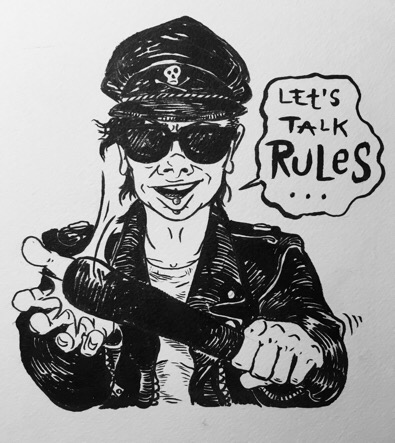 Well last week we had chaos and disruption, so reckon it's high time we reestablished some order around here. And to do that ya need rules, right?

Well fine, we ain't got to call it “rules”; we can think of it as a set of prescribed limitations, or boundaries, or a common consensus of general expectations and norms… Ah, same effect, I see. Crap. This might be harder than I thought, selling y'all on rules.

Fine. Look here: you get up in the morning to go to work or school, and you leave your house. You know what time to leave your house because you know what time you're expected to be where you're suppose to be at. Er, some of us are better at this than others, but point being your daily drudgery probably has a set time to start, right? You cross the street. How come you don't get run over crossin' the street? On account of traffic laws that say you gotta stop at this light or sign or under these circumstances. You feel reasonably safe crossing a street because you expect drivers to follow them rules. You walk into the corner shop, grab your beverage of choice out the little fridge over by the tabloids and the display with them tiny roses in a glass tube that everybody knows is just for smokin' crack, and you wait in line. You wait in line to buy your drink, just like the folks in front of ya are waitin', because all y'all knew that's what's expected of ya.

And if some dude ran into the shop and cut line after you'd waited so damn patiently for the lady in front of you to pick lotto ticket numbers with the birth dates of all twelve of her grandchildren, you'd be pretty pissed off. Oh sure, he's double parked and his wife is in labor and they're just tryna get to the hospital but first he's gotta buy his scratch offs, see? But what makes him so damn special? Hell, maybe you're late! Maybe you should have pushed grandma over and cut line yourself! But what if everyone acted that way? I mean, anarchy sounds real cool in punk songs and Mad Max movies and all that, but in reality it gets real uncool surprisingly fast. Because you're probably not as much of a bad ass as ya think you are, and even if you are, it sucks having to spend every waking moment worrying about what you're gonna do next and who's gonna get ya and where the fuck to loot for smokes next because we already cleaned out the Rite Aid and the next possible source is on someone else's turf and those fellas have guns and amphetamines, and… you get the idea. And I ain't convinced that anarchists even like anarchy. Ya ever been to a so called anarchist collective or community? Dude. Those guys have SO MANY rules! Usually about doing stupid chores, and usually enforced by passive aggressive ostracism, but I digress.

Now, nobody wants to live in a fascist authoritarian nightmare world where your every move is regulated and controlled under penalty of imprisonment or death. Let's not get extreme here. But when we have the right amount of rules, it allows us to know what to expect. And if there's a comfortable amount of the happenings of our world we can just take for granted, and we ain't gotta figure everything out on the fly, it gives us more freedom to do stuff we enjoy. Like makin' comics, for one. I just don't think I'll have much time for comics after the breakdown of civilization.

Ah, there it is. Like sunlight reflecting off a shiny quarter in the gutter, we catch a glimpse of the point! Comics, right? Right. Let's reel it back in, now. Just as rules and established norms are useful for a functional and productive society, a certain amount of limitations or boundaries can help create better work. Now, everybody's creative process is different. Some folks thrive in chaos and disorder, but to be real honest, those folks are kinda like unicorns. Sure, your imagination is full of boundless possibilities, but when everything is possible somehow it seems like nothing actually happens, right? It's kinda like how it seems like the more “free time” ya have, the less you actually get done. Most of us need at least a little bit of structure, and sure, maybe even a couple rules for ourselves and what we're tryna do here.

Now, these can be rules about how you write- how characters interact with each other and their world, how they speak, how they move about in their environment and the scope of that environment; about how you draw or create the visual aspect of your comic- decisions about style and continuity, how you choose to treat backgrounds or perspective, how you deal with text, speech bubbles, and lettering, use and variety of media; or how you present your comic- panel format and orientation, consistency or variety in page layouts, the size of a page, the length of a story, and so on and so forth. There's a lot of ways to look at it and a lot of ways to use the ideas of “rules” (and, of course, breaking those same rules… duh!) as a creative tool. And that's what we'll be talkin' about in the next few weeks!

Guidelines, not rules. There are times when you need to bend the rules and remember their spirit if not their letter. Improvise, overcome, adapt just like we did in the Sandbox. The US military has a tendency to put training centers and then fight wars in sand filled places. Some of us are a little too familiar with sandboxes you civilian types may know it as the South West Theater of Operations e.g. Iraq, Afghanistan...

You need some kind of rules for everything to work. It's as simple as that. Else, you'll end up with some random collection of scribbles that make no sense whatsoever - perhaps not even that. In society it's slightly different: if you've got no rules and more than three people, one of them - the most charismatic or violent one or just the one who shouts loudest - will quickly bully the others into submission. That's how despotism and fascism and what have you get started in the first place. It may be a hard pill to swallow, but you do need a firm set of rules just to prevent that from happening. People are as weird as that, I'm afraid.

Yea, stories gotta have rules. That sucks. Because sometime you just wanna let your imagination run loose like you did with your GI Joe toys while in the sandbox your dad built. Wait. Do kids know what a sandbox is? Nevermind...

Looking forward to all the rules.

Good stuff! Agreed on some kind of structure being necessary. I've slipped off the track actually, not making comics. Tryin' to get back on course!

I recall a quote by Hugo Weaving in the Wolfman, when asked why he didn't do some questionable things in his investigations... He said "Rules, Mrs Kirk. They're all that keep us from a dog-eat-dog world, you know..." It stuck with me!! But that's real life! Why can't we 'break the rules' in our fantasy worlds? Well we can to an extent, but too far and our story becomes, to varying degree, a mish-mash. Incoherent! I enjoy reading stream-of-conscious musing but they're not stories - stories gotta have dem rules!!

That was well written, I was totally caught up in the "no rules" society thing XD Yes indeed rules are important for making comics! When I first started I knew very little about them... I sort of fought my way to them as I went. Just simple stuff like speech bubble order, the type of fonts to use, panel order when you have a weird layout, PAGE SIZE, how much detail to use in a page, how many panels to use... It's complicated.