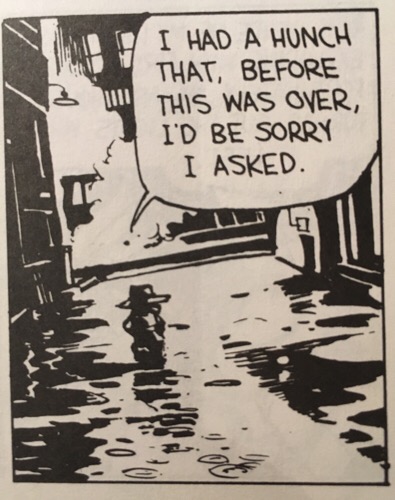 Aight y'all, go ahead and fasten yer proverbial seat belts, on account of we got a lot of ground to cover with this one! Actually come to think of it there ain't really too many proverbs about seat belts; more like I'm stretching out a turn of phrase to the very limits of its meaning, right? Eh. Never mind then. How about, get ready to read a bunch of blog! See, how exciting did that sound? Not very. Never mind again, then, and re-fasten your seat belts (or live dangerously and totally don't fasten them, I'm not your mom, okay?) because here we go!

Last week we talked about five elements of your comic- basic building blocks, that is: SETTING, CHARACTER, ACTION, TONE, THEME; and I suggested that at least one (and likely several) of these aspects of your concept and writing oughta stay more or less consistent in order to give readers enough of an idea what to expect that they'll keep coming back to see more. Unless what they expect is a thing that they hate, in which case who needs ‘em anyhow, right? No accounting for taste with some folk. Now, as I told y’all last time, while we don't want to read “Random Joe's Random Comic of Randomness LOL” (Pretty sure I have stumbled across an actual web comic or twenty that was basically this) we also don't want everything to always be the same. So where's the in between?

Y'all have seen this guy, right? I mean, at least pissing on the number of the least favorite NASCAR driver of the dude drivin' the truck with the gun rack in front of you in traffic, right? 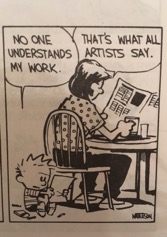 Well if you ain't, I gotta wonder a little about ya, but I'll fill ya in: Bill Watterson's strip, “Calvin & Hobbes”, ran for ten years- a brief stint compared to a lot of strips, honestly, but it's one of the most widely reproduced and recognized comic series of our time. It's about a little boy and his stuffed toy tiger that's actually a walking, talking, philosophizing companion when nobody else is around. 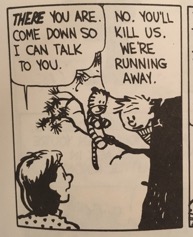 One thing Watterson does that endears so many folks to this strip is he's real good at representing what goes on in a kid's imagination (and, er, some of us less well-adjusted adults too, perhaps) in the context of everyday life. 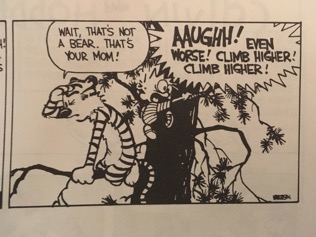 The strip is grounded in everyday life, but Watterson uses Calvin's imagination to step outside the boundaries of that “everyday life”. This leaves a lot of room for creativity and fantasy while sticking pretty firmly to the rules of what can and can't happen in reality as we know it. 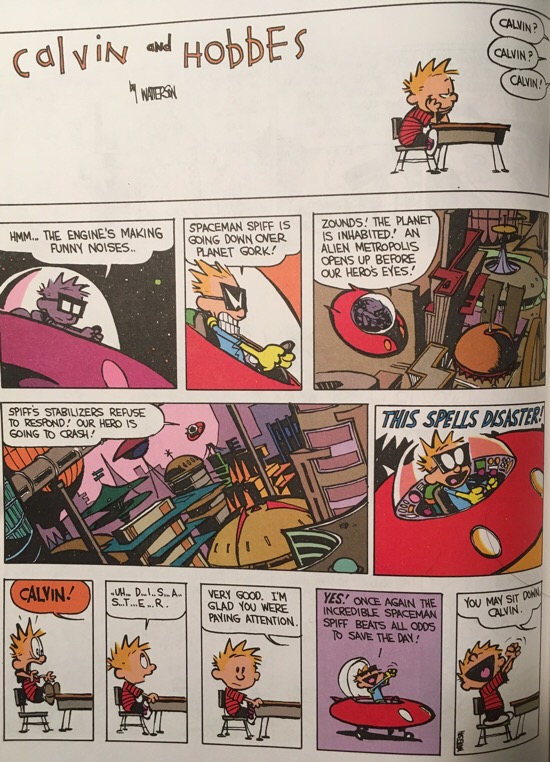 This one, the tone of the comic is changed- Calvin's talkin' like a hard boiled noir detective and it's drawn to mimic that kinda look, too: 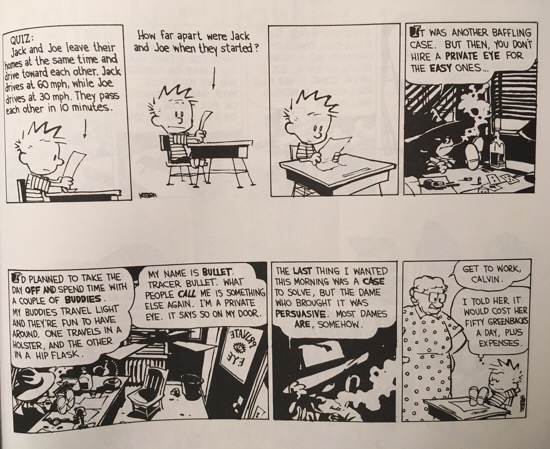 This one the art style has even changed to mimic soap opera comics: 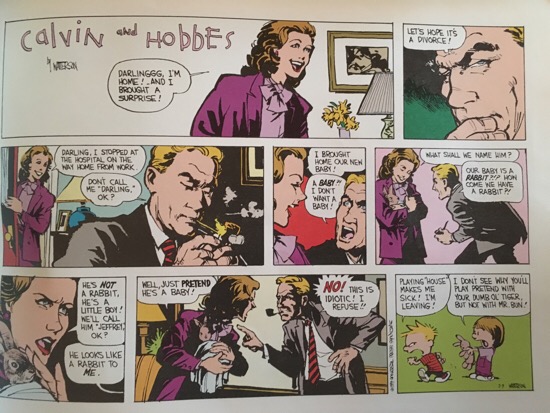 Now Watterson ain't the first or only one to play around this way: 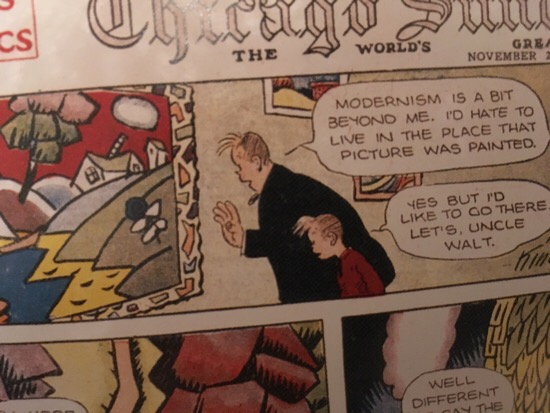 Here's "Gasoline Alley' poking fun at (what was then) modernism about fifty-some odd years earlier. 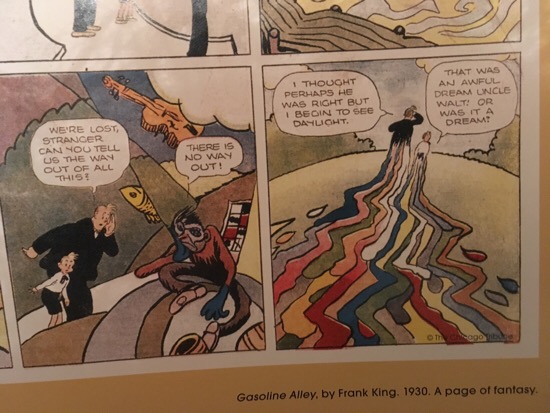 Actually, Zippy the Pinhead is a bad example for damn near everything I'm tryin' to say here and it's really hard for me to explain why this comic even works except that the 80's were a weird time, okay?

But what always happens here is we're returned to reality, right? (Forget the Zippy example. That doesn't count. There is no reality, only cynical Reagan-era intellectual absurdism. Turn around and walk away slowly. Save yourselves now.) And there's always something that ties the fantasy action back to reality as well, so we know we're reading the same comic from start to finish, day to day, and so on and so forth.

Now, like I said last week, there are other ways to create (and disrupt) a sense of continuity in your writing. Life ain't just made up of fantasies and dreams, after all- well, okay, depending again on your level of adjustment to adulthood and your grasp on reality and your legal or medical status as a person of sound mind, that may be more or less true, but let's pretend we all know the difference between what's real and what isn't. (Unless you're in a Zippy comic.)

One thing Watterson has said about “Calvin and Hobbes” is that from the start, it was always more about the characters than the jokes. Now, I'm the kinda person who's gonna relate and latch on to strong characters above all else, and that's how I tend to write; I feel like if you've got good characters and you know those characters well enough, the rest basically writes itself. That's easier said than done, of course. And without runnin' off into a tangent about character creation, let's just say that your characters need to be distinguishable from each other and react and interact in fairly predictable ways. Probably the easiest way to maintain continuity is to maintain characters with recognizable personalities; then you can go changing up other stuff. Predictable? But that sounds awful! Predictable means boring!

No, it just means that when they do or say something, the reader accepts it as plausible given the context you've laid out for them. Listen, y'all really wanna go read Random Joe's Random comic of bloody awfulness where there's no reason or explanation for anything? No, you don't. Seriously, you don't. Anyhow, that doesn't mean your characters always have to follow the rules you've set up for them. In fact, if you have Random Joe react to any stimulus with a barrage of nonsensical gibberish 19 out of 20 times, and the twentieth time he just shakes his head and says, “You know, I'm starting to question this approach”- hell, it might mean something! You've set the reader up to expect one thing, then by giving them the opposite you can use that disruption of Joe's normal behavior to say something about his character (the randomness is just a thinly veiled fear of not being taken seriously), or make a statement about an idea or situation (constant randomness really isn't that fucking funny), or just make a joke (uh, I think randomness isn't funny was the joke, but maybe I ain't funny either). And breaking from the norm of how you have your characters act or react can be a powerful way to make a point or emphasize the gravity (or, on the other hand, absurdity) of a situation.

So establishing norms, disrupting norms, right? There's more to it than that but it's a start. Tune in next week when I talk about continuity and rules for drawing, which let's not kid ourselves is the better part of what everyone cares about. Cheers, I'ma go pass out after fulfilling my obligations to the god of deadlines.

This is advanced level commentary and criticism. :) I love it, you, banes, Tantz and Kawaii should be doing lectures in Drunk Duck university.

I admire Watterson for stopping the comic when he felt that he'd achieved his goal. He could have easily continued just turning out tripe for the big bucks like the newspaper cartoonists do today. I don't bother checking out the comic page anymore. It's all reruns for the herd.

And I should point out that the strength of Wattersib's characters allows him to break continuity by presenting both Calvin's fantasies and his everyday reality as those around him see it as a seamless narrative. Because we know Calvin and what to expect from him, these strips read as a seamless narrative instead of a confusing and disjointed mess. The characters are making this work, first and foremost.

There was SO MUCH I wanted to cover but realized my reach exceeded the time constraints I was working with! Glad it made sense to y'all. I'd hoped to get into how to construct rules for yourself about characters and their worlds, but that can be another blog I guess!

*Stands and applauds* Wonderful, wonderful article...!! And so nostalgic!! I LOVED Calvin and Hobbes back in the day (even have a few of the anthologies) - now I'm gonna have to bust them out and take a look again!! Yes, the 80s was a weird decade but it was OUR decade!! :D