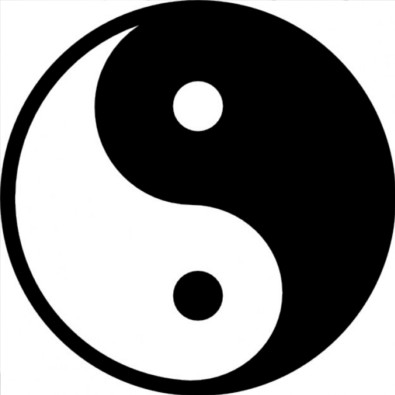 Who hasn’t seen this ubiquitous symbol? It’s one of the most typical motifs signifying the balance between opposing forces in the world- but also the ever alternating phases of destruction and creation, of overwhelming overturning of the status quo so the new can be created.

And that is perhaps the most ever-present Jungian archetypal motif: Deluge and Creation.

Deluge refers to the Flood, if we take the original motif: the ever present story of the flood that killed everything on earth, except for a man and a woman, and a boatful (or other means appropriate) of animals to repopulate it.

The catastrophe and destruction is clear – flood kills everything. But there is also the motif of Creation in there, hence the reason why last time I said it is actually a pair of motifs that go hand in hand: After the flood, the world is created once more from (presumably) better quality forefathers.

Of course then, Jung took this motif and classified it as archetypal- and it is easily the most used motif in stories and creative writing, comics and movies out of all of them.

The hero’s journey often walks on its traces- the world is destroyed (or under destruction) by a terrible menace or evil, and the Hero rises to stop it, and jump start the Creation once more, be it in the form of reconstruction or complete back-to-basics rebirth of the world/setting that has been saved.

Symbols for these two motifs are overabundant: From the yin-yang image I started this newspost, to the triple spiral and the swastika (pre-nazi), to fire symbols and dragons swirling around their own bodies and the Uroboros (the snake that eats its own tail) and the triquetra, across all cultures and stories in antiquity Deluge and Creation have been depicted in motifs full of swirls and movement that clashes with its own self. We come across the motif in modernity nearly everywhere as well, but less in visual motifs and more in the clash of color, with desaturation referring to Deluge and oversaturation to Creation (a good couple of movies capitalizing on the color version of the motif were Smallville and Equilibrium).

In this still, which is the character that is the agent of Deluge, and which one of Creation based only on what they're wearing?

Visual motifs of Deluge and Creation in modernity often may include the clash between Nature and Technology (Watership Down and Secret of Nimh do a good job of that), with Nature being Creation (often represented by the Tree of Life symbol, more or less naturalistically) and Technology (often represented by modern versions of the archaic Deluge/Creation symbols, like the Skynet logo) the Deluge.

I would also think that it is no accident that in Lord of the Rings, it’s the Elves that have the strongest connection in Nature and the good guys that sport the logo with the flourishing tree, and the Orcs/Mordor that has the black tower and the technology of Saruman, with logos of a blood red dilated eye (as of the dead) on black.

Who would be the good guys, if you knew nothing about either side, just based on their banner? 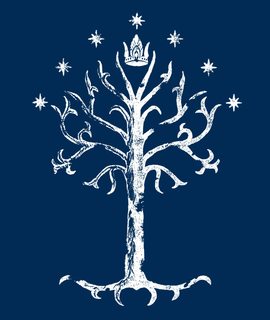 The motif of Deluge is used to incur strong emotional reactions in the audience, of impeding threat, death and desperation, priming for maximum impact of the antagonist’s actions.

The motif of Creation is used to inspire solace and hope, and usually it is by such symbols that movies end, to soothe the audience after catharsis has taken place- a rising sun, a blooming flower, a flourishing tree.

What such motifs can you find in your comics, if any?

Morgan: The bottom line is, they still recognize it as a mushroom cloud, not a flourishing tree :) // Bravo: Quite right. As for the swastika, one could say modern history has turned it into the penultimate creation/deluge symbom exactly because of that, haha! Though it would be deluge more now.

Tantz, if you ever saw my drawing of trees and mushrooms clouds you'd see the similarities. Big, bushy heads, thin trunks spreading out at the ground. If I didn't add color, people would get very confused looking at what I'd drawn. ;-)

The Aordian symbol is a bisected trapezoid. A very stylized Yin-Yang, cycle of life symbol. And the fact that its edges are square and not round implies a rigidity that may be there or not. I try to use symbols to mislead the audience. Like Aordians mostly wear black and the supposedly "evil" Diamorians wear white and sky blue. You see they as the eternal enemy perverted those colors in the distant past. It's the trickster in my nature.

Just because a symbol means one thing in one context doesn't mean it always mean that no matter how much of an archetype it is. Archetypes can be used for irony and can be perverted. After all the swastika/sun wheel was/is a positive symbol before the Nazis perverted it. Look at its continued use in Eastern Culture/American Indians and the Finns. And yes the mushroom cloud can be used a perverted and/or ironic symbol of the re-birth of the world tree. See Armageddon, Ragnarok and Gotterdamerung imagery. The mushroom cloud can be seen as imagery of death and the rebirth that follows. How many post-apocalyptic stories start with the bomb clouds and then tell the story of the re-birth of a new world? Watch the sci-fi classic Things to Come. William Cameron Menzies knew his imagery.

Great stuff! These symbols have always been so powerful to me... So of course I gave Kimber Lee (from the Godstrain) a 'trampstamp' tattoo of an Oroborous!! :D

The atom bomb looks like a flourishing tree? It's called a mushroom cloud, not an apple tree :P // Oz: Well, CC believes she's serving the greater good despite being a cutthroat b*tch ;) I would say Pinky TA falls more in the color-code motif than the visual ones.

Pinky TA has a griffin symbol, a heart symbol, and stylised "TA" in a blue roundel. I think those are the main ones. I'm not sure if any fit the Deluge/creation mould... Hmm, ok, possibly the Griffin is "deluge": that's mainly on war machines only. And the heart is "creation", mainly because Cc wears it on her crotch so hat's an obvious connection. But since Cc is a force for bad, she represents a twisted type of creation.

The eye in the CBS symbol is used to symbolise awareness and intelligence. The same with the eye (and pyramid) on American currency.