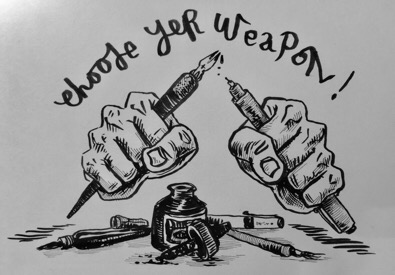 Hey there, gang! Here we are again, another Friday, another ramshackle collection of anecdotes and tangents in the guise of comix-related blogging from yours truly! This week we're gonna jump right into another exciting episode of “aw, crap, well lemme think… what have I been up to recently? I bet I could turn that into a blog somehow!” Haha, yes, calm down y'all. I'ma get to it! Today’s installment? Well I'm glad ya asked! (Whatever, it still counts as audience enthusiasm even if the voices are in my head. My shrink tells me it's easier to cohabit with them than try to shut ‘em up.) Today we’re gonna be talkin' about the benefits and limitations of different kinds of traditional drawing tools!

Now I'm talkin' about this because, as previously insinuated, it's something that's been on my plate recently. The past, oh, year or so I've been slowly transitioning from working predominately with fixed width technical pens, to dip pens and brushes- instruments that allow for more varied line width but that also demand a bit more sensitivity from their users. Now for about twenty years I've used Sakura micron liners; the first seventy some odd pages of my comic The Hub are inked with those. And I've used them with religious fervor and devotion for good reasons. One, they're consistent. Ya know exactly what you're getting, as far as line quality and width. They're easy to find in art and craft stores. They're easy to carry around. The felt tips are real champs at holdin' their shape, provided ya don't grind ‘em too hard. They dry very quickly, and don’t tend to bleed or feather. And you can draw, draw, and draw with ‘em, on account of like any disposable pen, they got their own internal ink supply. Now there are comparable brands- Copic, le Pen, Staedler, Faeber-Castle, Prismacolor, etc.- but the microns are my standby. They’re great for intricate hatching and stippling, and technical drawing especially. However, nothing's perfect. (Who am I kidding, barely anything is acceptable or even tolerable let alone “perfect”, right? But to sidestep the risk of a loooooong digression we'll move along.)

There's a few reasons I wanted to branch out from fixed width pens. For one, and I'm sure we've all been here, when I erase pencils from my pages, the ink tends to fade. Now, typically I'm doin' this after the line work stage and it doesn't affect subsequent inking, but it's obnoxious to have to go back over lines I've already drawn to darken or thicken them. That's another thing- you know exactly what you're getting with the fixed width pens, but that's all you're getting. The more I looked at other cartoonists work, the more I realized there was an expressive variation of line weight I wasn't able to get with the microns. Sure, I could switch back and forth between sizes of lines, but there was always gonna be a stiffness and rigidity. That's not always a bad thing, mind you, it's just a thing I decided I wanted to do differently. Yet another thing I wanted to do differently had to do with the lack of efficiency in drawing that the microns totally enabled. Because I could get such tiny lines (especially when using mostly dried up pens, a trick I learned for making barely-there lines for light, light grays) I tended to make like, a million passes when building up an area. That might be okay every once in a while, but upon realizing I had a set amount of work I wanted to finish, like, before I died, I needed to reassess how I was drawing.

Now, there's definitely been a learning curve. I kinda eased into it by using brush pens, which I have a love/hate relationship with for sure. Like the disposable technical pens I'd been using, they're easy to carry around (much easier than lugging around delicate nibs and brushes and ink and wads of paper towels and little cups for water and why the hell do I feel the need to bring enough stuff to make a whole comic with me everywhere I go when I've never once had to stop in the middle of grocery shopping and draw?!). They've also got their own ink supply built in, so again no stopping to dip. But unlike the technical pens they allow for a much wider variation of line, although like I mentioned before ya need a bit of a lighter touch than I was accustomed to to get those finer lines.

After using brush pens for a good while, I started inking with nibs for the first time in… uh, a really long time. There's nothing like the look of fresh ink on a crisp page… until you fuckin' smear it on account of you're totally not used to havin' to let the stuff dry, that is. But there's something about a line drawn with a nib that really can't be replicated. And there's a romance to it, too. The more I looked at the work of legendary cartoonists and inkers, the more I realized I wasn't gonna get what I wanted unless I rolled up my sleeves and got dirty. Really dirty. I mentioned all the smearing, right? Ya also can't bear down on nibs like ya can a felt tip or metal tip. And it changes the rhythm of your drawing and entire process when you're stopping to dip. Let alone having to keep in mind the grain or surface of the paper you're working with and how much or little pressure to use to avoid snagging the tip. But the possibilities of varied mark making are incredible and the crispness of lines totally worth it. And look ma, no faded out lines after erasing!

Anyhow, that's my take based on my own work and process. What about y'all? How do you draw and ink? Do you stick to one pen or switch it up? Have you changed your process over the years, and to what effect? What have you tried or what would you like to try?

I've never even knew about some of this stuff!! Awesome!!

I work 100% digital now and work with replicating effects like Scarf, but back in the day I used everything... Weird how I start to remember all that back-in-the-day stuff now XD I think most of all I liked using nibs. The drying was a bastard though, I never really learned the blotting paper trick. I liked using coloured inks, generally blue. It gave lovely effects at all the different concentrations. You have a million shades of it at your disposal and often smearing it makes a nice happy accident. I only used brushes with inks for washes and tones. inking with them was just like paining and not what I was using inks for.

When I worked traditionally I used every nib I could get my hands on(no Japanese stuff available back then) and one thing I couldn't live without was blotting paper. Those pens pool so much ink it can still be drying ten minutes later and if you're painting over those inks the raised lines can cause problems. Depends on your ink, but blotting them dry never took away any of that crispness. I used fancy sable brushes too, but the best brush pen I found was the Pentel Pocket Brush, which I still use for sketching. Brush lines can fade as much as microns and you often see that on original comic pages. I work all digital now, but I'm glad I learned how to use those tools. When I ink with my Wacom, the pen becomes a brush or a steel nib and I use it the same way. I just don't need the blotting paper any more - literally saves me pennies! The thing I haven't tried is a Cintiq, but I'm so used to not having my hand on the page now, I'm not sure I can live with it anymore.