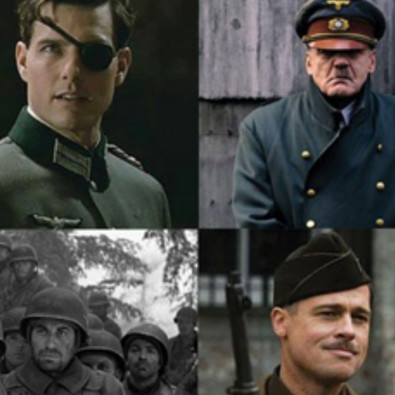 So here’s something a bit more fun that’s been rolling around in my head as I was gathering up the stuff I want to talk about in the next segment of Jungian archetypes (yeah, I’m not yet done with that, it’s still happening…) and which I haven’t really seen discussed as much as the more classic “comic inspirations” lists for comic makers:

What movies have inspired you, or you feel have trickled through to influence your comic narrative, style or mood?

Movies are themselves sequential art, just as comics are and in truth they share a lot of the artistic principles of making an engaging piece for your audience: from directing to montage to story boarding to ‘camera’ angles (panels & angles within them), a lot of the artistic choices we make as webcomic artists run parallel to the ones made for making movies.

I for one, when writing the script for Brave Resistance, basically wrote it up as a movie script, with some basic direction, but left the actual artistic choice of angles, lines-per-panel and lines-per-page to the one with far more talent and skill than me in those areas, Pit-Face.

For Without Moonlight I haven’t had such luxury and I draw on my own resources to make these choices. Some of them are very conscious, some not so much.

I’m mentioning my two comics/joint comic project not as a plug (ok well that is a happy accident too) but because though they have extremely similar genre, subject matter and setting, they are vastly different when it comes to dialogue, tone, mood and pace (well, you’d be able to tell with pace if you could read them all at one sitting… eventually you will! I’m optimistic!), and it all comes down to stylistic choices more than anything else.

Where BR’s dialogue is smarmy and crackling with snappy turns of phrase and back-and-forth, WM’s is grim and moody and foreshadowing.
Some of my movie inspirations for dialogue (without wanting to sound presumptuous) include most of Tarantino’s scripts (with Kill Bill 1 & 2, Inglorious Basterds and Reservoir Dogs really high up on my list), The Coen brothers’ “Oh Brother, Where Art Thou?” and the last two seasons of Blackadder (The Third and Goes Forth).

The common denominator in all of these brilliant movies/series as far as dialogue is concerned is that it always serves to characterize and further provide insights to the characters speaking it, not only to further the plot or relay exposition. And that’s what I’ve always been striving to do with my dialogue. I haven’t ever tried to simulate my inspirations, but I did try to have my dialogue do what theirs did.

As far as how WM looks, aside the (I think obvious) film noir influences, some of my main movie inspirations include Inglorious Basterds again (that movie is gorgeous!), Schindler’s List, Come and See, The Pianist, Downfall, Valkyrie, Life is Beautiful, Amen and Miracle at St. Anna’s to name the few that come to mind immediately- some for their colors/cinematography, others for their angles in outside shots and landmarks, and others for the pacing of the story.

I could go on and on for every single one of them, but I’ll stop here. Please share, what have been your movie inspirations for your comics?

Used Books started as an anime starring anime tropes versions my friends (it was more rough storyboards than comic). But it morphed into its own thing. Various story arcs and characters are inspired by different movies or shows. It's never direct inspiration. More like a train of thought. The movie is where it leaves the station, and eventually it gets to my own script after a bunch of turns. When I'm writer-blocked, I have some go-tos for either plot or character inspiration. Sometimes it's Detective Conan. Sometimes MacGyver. Favorite adventure movies from the 80s or 90s.

There was an animated movie a few years ago based on the book "The Tales of Despareaux" about a brave little mouse. Someone posted on a forum that he took his kids to see it and they didn't like it. I looked in the movie section of my newspaper and found the ad for the movie it was a picture of a cute little mouse wearing a hat with ear flaps on it standing in front of a fairy tale castle holding his little sword made out of a straight pin high in the air. I saw this and was like, "Huh? How do you screw this up?". I cut out the ad, stuck it in a norebook, and used it as my inspiration to write "Chevalier" which ran here at DD and won best children's story" award. Dee - HG writer dude

Bravo- I knew you'd notice that! Take it as a little present for you to unwrap ;)

And Tantz you did a great disservice in your article by not mentioning the black and white film in the lower left corner of your montage. Battleground (1949) one of the greatest war movies of all time. It's about another company of the 101 Airborne at Bastogne during the Battle of the Bulge. Band of Brothers would cover the battle as well from the POV of another company and in fact a couple of the bits in Battleground are from the experiences of Easy Company that are chronicled in Band of Brothers.

I want to do a comic based on other aspects of Stalingrad, Cross of Iron, Big Red One, Breakthrough (1950), To Hell and Back and the Soviet miniseries Liberation. Just tales about small units doing the simple stuff one finds in military service. One of the best war movies of all time is Lewis Milestone's A Walk in the Sun about one platoon, 6am to Noon at Salerno. The best downed pilot movie is probably One of Our Aircraft is Missing. British wartime movies (and for years afterward) could be very stark and real because the movie-going public was not to be fooled again as it had in the Great War. So British movies tended to be very authentic. A tiny minority of American movies were but form every Sahara you had to wade through a pile of jingoistic drek like Wake Island or Air Force.

Every professor I had in history was a film buff. The two almost go hand in hand. There was even one class about warfare that featured full discussions and screenings of war movies. Movies are a big influence on my work. Attack of the Robofemoids actually had its cast based on the King Vidor version of War and Peace. Interstellar Blood Beasts was consciously styled from the Italian space operas of the 1960s and Mario Bava's Planet of the Vampires. My two space mash-ups owe a lot to Mel Brooks' work. The World War II sequences in Mask of the Aryans are mostly based on the movies Cross of Iron, Stalingrad (1993) and the Max Hastings' book Armageddon: The Battle for Germany 1944-45.

High Fidelity, and Clerks 1 & 2 are probably the biggest movie influences on my comics. The others would be The Big Lebowski, and a couple others as diverse as the Muppets, Nobody's Fool and Friday the 13th, either for character stuff, some themes, or certain streaks of melancholy

I love movies, and I'm inspired by them all to some degree, but with the Godstrain, the two biggest are undoubtedly the Matrix and Inception. Dream-like worlds where you can do amazing things, but it can get tricky to tell the difference between them and the real world, esp. when you start doing amazing things in the real world too...!!

Ugh, the Guns of Navarone... otherwise, yeah those were very larger than life films!

Earlier war films have been an inspiration to me in some ways, because they have such a cool energy about them that crackles and an elegance that modern films lack. Modern films have a bleaker feel, not as staged and epic feeling. -The great escape, the guns of Naverone, Wild Geese, a Bridge too Far, Battle of the river Plate, the dirty dozen...

most of the inspiration for my comics have been movies