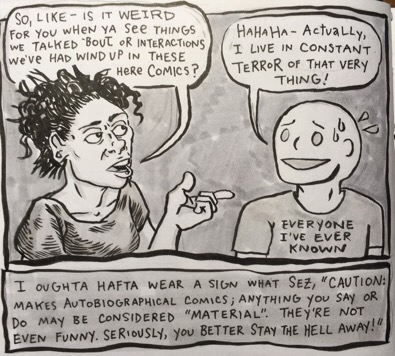 As all y'all probably are well aware, I am a hilarious genius. All cartoonists are hilarious geniuses; we have to be! Well, half the time anyway- the other half we spend hating ourselves and overcompensating for our inadequacies. It's a storied and well-documented tradition dating back to the beginning of time.

Honestly, I ain't really all that funny. I have one original joke, and two others that I didn't make up which I can tell without doing that annoying thing where ya get confused and forget the punchline or the setup or get it out of order. Just three jokes. And all three are about dicks. I suck at writing jokes. Thankfully, I'm good at sucking… er, never mind. So how do I manage to be such a hilarious genius? Well, lucky for me, my life is one big cruel and absurd joke! So I write down what actually happens, and voila! Instant laughs! (In all seriousness, I think my life is far more cartoonish than average. I mean I look like a fucking cartoon. The people in my life are basically walking cartoons. The shit really does write itself, as they say.) Now, y'all might've got this far and be throwing up your hands, saying, well that's all well and good, if you're one of those assholes making autobiographical humor comics! I don't make that kind of comic. I hate that kind of comic! Everyone who makes that kind of comic is simultaneously and incongruously self-loathing and delusional about how they're a hilarious genius. Well, hold on to your hats, folks, cuz you don't have to make autobiographical humor comics to allow the cruel and absurd joke that you're inhabiting to inspire your work. Let me explain!

Incorporating details observed in life into our work is an essential part of the creative process for most artists, writers, and story-tellers. For one, because it imbues the work with a kind of realism that helps your reader relate to your story, characters, and world; but also because of the old adage, “truth is stranger than fiction”. I mean, hell, look at the damn news lately! I only wish I could create an absurd tragi-comic dystopian world as vivid and complex as the one I'm livin' in!

So getting' down to business, short of making strictly autobiographical work, how exactly do we take our lived experiences and turn ‘em into art? Well I don’t know about this “we” stuff- ya got a mouse in yer pocket or somethin'?- but I can give y'all some tips on how I do it. This first step is you gotta be a creep. I almost never wear headphones when I'm going about my daily drudgery, which most of my friends thinks makes me a masochist. Why wouldn't you wanna block out the hideous, invasive sounds of other people's idle chatter and cries for attention? On account of sometimes you overhear good stuff! Stuff you can use! MATERIAL! I used to write down bits and pieces of overheard conversations in notebooks, which I sometimes still do. But smart phones or tablets are great for recording things on the fly, because everyone assumes you're typing a face book rant or playing hungry hungry hippos whatever the latest addictive, mind-numbing, mass-marketed game is called. Hell, I write almost exclusively on my smart phone these days, on account of I never learned to type and come to find out I’m a much faster texter. I can drop photos or doodles into the notes I keep there too, and they're all in the same place. Sure, a trusty sketchbook or bar napkin will serve just as well, but ya run the risk of being conspicuous in your creepiness, which probably should be more of a personal consideration for me than it actual is, come to think of it. 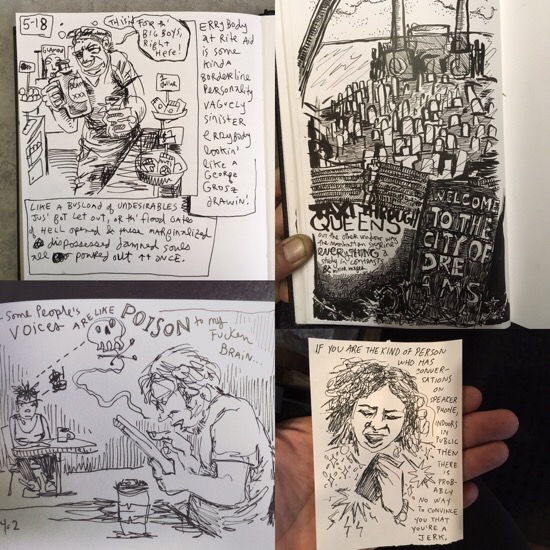 sketches from life or from memory of stuff I see and wanna remember; I have SO MANY of these.

What I'm listening for is interesting turns of phrases or speech patterns. I like most of all the way people express things poorly or inarticulately. Ya know, the way people says things wrong or folks what don't talk so good, dig? Growin' up in the rural American south, as ya might imagine, provided a veritable gold mine of colloquialisms. Sometimes these help say something in a funny way, but I find for me personally more colorful dialogue helps convey emotions or tone that would fall short if I was writin' it out in proper English. Also, people can just flat out say some amazingly dumb things, which are always funny and which are often hard to come up with yourself on purpose; or things which taken out of context or put into a new context are incredibly poignant, cruel, ignorant, insightful, etc. I have a whole folder titled, “shit people say”. It's great. I take these quotes or the idea of these quotes and stick ‘em in my own writing. It doesn’t just have to be things people say or do. I also like to jot down, sketch, photograph details of my environment that I find silly, sad, meaningful, or that I think I can somehow someday use. I like graffiti and signage a lot, and things people throw away as garbage or abandon on the street. I like looking at the particular ways things can break, be damaged, warped, or just be “off”, too. I find it helps break up the monotony and risk of getting too generic when drawing backgrounds or “everyday” scenes when you can stick in these bits of imperfection or absurdity. 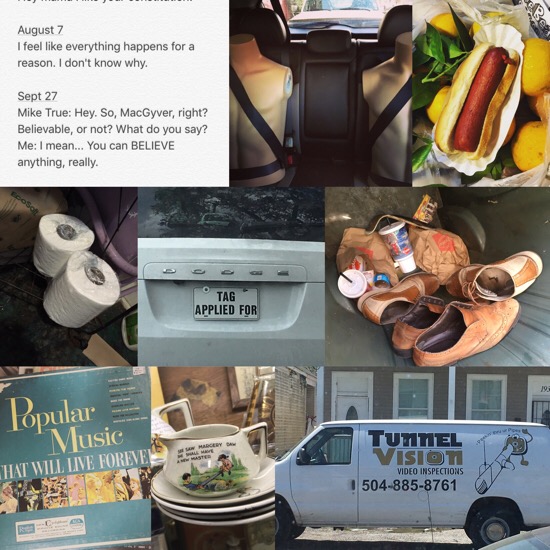 From my personal “what the actual fuck is this nonsense maybe I can use it somehow” files.

I kind of think of these things as “snapshots” that I work from, in my writing and art, and can splice in where I need them. Over the years I've conditioned myself to notice contextual or situational details in my surroundings that I can come back to later. If you're really into noticing details, you're never actually bored! You're constantly looking at what's around you and thinking, how can I use that? How would I draw that? What if this weird conversation this couple is having next to me was really a… you get the idea, right? Whole conversations or situations can be lifted the same way- I don't know how many times a day (ask my roommate or coworkers who are probably sick of hearing it) I say, “That'd make a great comic!” Tell me about that annoying guy that comes into your work, the conversation you had with your mom, the weird way so and so restocked the soy milk, whatever. I am probably making it into a comic in my head. You can, of course, embellish upon pretty much any situation that you want. Like, take something that's slightly ridiculous or and turn it into as elaborate spectacle of ridiculousness as you want! See, you're using this stuff as inspiration, a starting point to base an idea or vignette or scene off, so you create your own version of what you saw or what happened, deciding what to emphasize, what to amplify, how to frame and edit it to mean what you want it to say.

If you get far deep enough into the “art imitates life” rabbit hole, it actually reverses itself and life starts imitating art. Ya start living your life based on what would make a good story later, which I couldn't in good conscious recommend, unless ya want to make humorous autobiographical comics, which of course you don't. No one should want that for themselves. Seriously. Being a walking cartoon isn't always what it's cracked up to be!

lol It's weird... I know I'm imitating life all the time in art, drawing in experiences, anecdotes, etc... But at the time I've daydreaming and fantasizing so much that I miss lots of the little details in life! When friends wave at me when passing in our cars, I NEVER see them to wave back!! Yet, over and over, I find myself reference things I remember... Maybe it's my subconscious that's soaking in the world - sorta osmosis like!! Now, if I've got a couple drinks in me, I notice EVERYTHING!! :D

I want a little more of this thing you have: observing the details and not just blithely trudging through the hours and days. So easy to forget to do it. There are future comic stories all around, if we care to look. Another fascinating post, HH!

@Bravo, you are Drunkduck's Pierrot. Probabky all of us can be defined as Commedia dell'arte characters... I'd have to be Skaramoush probably, due to my black hussar outfit and love of dress-ups and self aggrandisement. :D

Hahaha, I would never have though YOU were so technologically minded HH. My art been digital for YEARS now and I'm not even that technical... I'm going to sart doing that- dropping pics into my notes. Good idea!

I live in an absurdist, pythonesque, dystopian satire which I call "idiots on parade " luckily I am too busy laughing or else I would be in tears. You see art doesn't simply imitate life, art imitates life imitating art like the serpent biting its own tail.