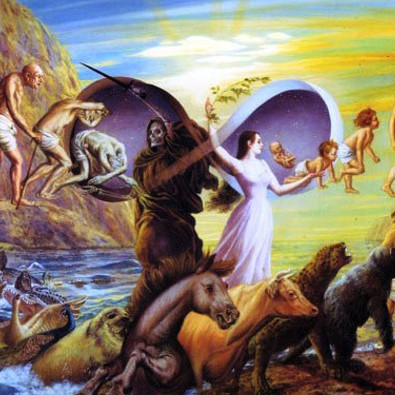 So here we are after the brief intermission, back to talking about archetypes from our friend Jung.
As of course is natural, all stories have to have a plot in order to be engaging and be in a position to make their points and get them across because the alternative is simply torture for everyone involved (I’m looking at you, Movie 43…).

The plot of the story is propagated by changes in the main characters’ state of being or their general status quo. And, according to Jung, these changes will fall under the broad but certain categories of the Archetypal Events: significant changes that push a character to develop towards a given direction (not necessarily positive one).

According to Jung, the main Archetypal Events are:

Birth: Birth signifies the emergence of something new. It doesn’t have to be birth of a character (though it certainly can be). It can be a new version of the character’s personality, a new state of being, thought or attitude. It can be anything that didn’t exist before and was created (i.e. construction, not destruction) as a result of a sequence of events/occurences in the plot.

Death: As would be expected, Death is the disappearance, the destruction, the omission of something pre-existing- from the actual death of a character to the death of hope, dreams or beliefs.

Separation from parents: In general, when a character is denied his/her support, nurture and guidance that had up to then previously been provided by his/her parents, mentor or other parental figure/parental constellation, this character is forced to grow and learn from mistakes and achievements and responsibilities. Such a transition might be a story’s entire character arc, or just the onset of the journey. Whatever it is, it’s always promising to be full of drama and excitement.

Initiation: The bread and butter of origin stories, Initiation is when the character forms a mentor relationship with the Wise Old Man or Woman (also called the Sage), or with the savvy characters that are gateways to a particular world or part of the world the character is expected to interact and develop in- a good example of a non-Sage character that jumpstarts the Initiation is the Artful Dodger in Oliver Twist.

Marriage: Apart from the obvious, marriage also alludes to the merging of sides, the forming of contracts and alliances, not necessarily harmonious or eternal. An alliance of enemies against a stronger third party threatening them equally would be a marriage, and from that interaction both characters are expected to learn, react and develop.

The Union of Opposites: Many ‘slap and kiss’ soap operas start like this, with two characters that “have nothing in common” and potentially being (or quickly becoming) at odds having to form a union, an alliance or a marriage in order to deal with some overarching situations. Hijinks ensue… or drama does. Or both. It’s become a very common trope in rom coms and action/adventure films but it has potential if used with caution.

And so this is it! If you’ve noticed I haven’t talked about the Hero’s Journey at all because this isn’t the issue- all of the above Events can be and often are sprinkled along the Hero’s Journey, in whatever incarnation it may take.

And, Jung would argue, no story can manage not to have at least one or two of these, be it in book, film or comic form.

bravo: Really? In what way? (never witnessed any readings) // Ozoneocean: Very interesting! THat could be a motif if used strategically.

You know Jungian archetypes remind me of a cold reading by a psychic.

My approach to death in Pinky TA though is much more in keeping with what you describe here! ^_^

The "death" archetype is interesting to me mainly because it's the chief symbol associated with my hussar uniform. I know you're talking about stories, but this is tangentially related... For those soldiers who wore it (as a military insignia), the death's head embodied a contract of loyalty to their country, their unit, king, emperor, until death. Death was the fulfilment of their promise and by displaying the insignia it was a proud declaration of that promise. So for them it meant something quite unique.

Glad you like them both! It's I think one of the most iconic reincarnation paintings. Here it is in full if you want to enjoy it: http://s3.amazonaws.com/rapgenius/1375060141_3LEEST5QT7mVUzElnk3w_reincarnation-jpg.jpg

Wow! Wonderful article you did here! I'm loving these archetypical things you're giving us!! That picture, too... I've never seen that before!! It's awesome!!