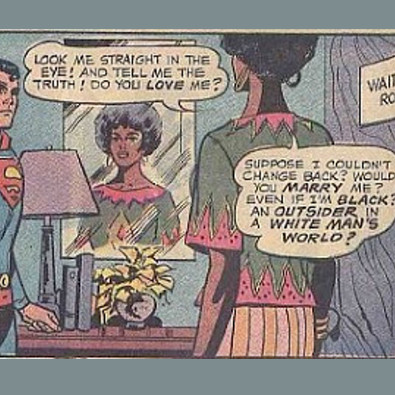 I’ve written about controversy before, and how it has its uses. But I haven’t really yet discussed what makes a comic controversial.

There are the usual hype-controversies like gender bending and race swapping in characters, but in my opinion these types of controversial issues are just what I call ‘pop controversies’: things that are made specifically to tap into and gain from a heavily charged issue/argument rather than add to it. To me these comics don’t have a personality- they are what they are as a means to profit more than anything else, especially in an industry that is on the brink more often than not.

And then there are other comics that become controversial because they (at least try to) illustrate the positions, opinions, worries and beliefs of their creators. Their content is saturated with political stances, religion issues, gender friction, sexuality, crime-related, race, gender, faiths/religions and other issues people grapple with, the daily life in assorted countries and the problems therein, and art is used to work through them or make a point to a wider audience.

So what makes a controversial comic worth its controversy?

1. It is about an issue, problem or situation that troubles a niche or percentage of people. That percentage can range from a tiny minority to a staggering majority, but it has to be a problem people realistically experience.

2. The issue at hand is woven into the story with at least enough of an opposite side argument to give the audience the reason why the problem/issue is controversial in the first place.

3. Not all the ‘good guys’ or the ‘villains’ are on one side. Good people and toxic people will stand on both sides of a struggle, clash or friction. If all good people are on the side the creator is rooting for and all the villains in the opposing side, the audience will disengage from the gist of the controversy and will likely feel the creator is hamfisted.

4. The creator must have done his/her homework on the issue from both (or every) side there is. Especially when it comes to politics, geopolitical struggles and religious/faith-related clashes, the narrative must be set in a well-researched world, even if the entire story is an allegory taking place in a fantasy setting: the matching to the real life situation must be possible for the audience to make.

5. Upon finishing the story, the audience has to feel that while they may root for one side or the other in a controversy, neither side is comprised of monstrous individuals or Nazis. (Unless the story is literally about Nazis… of course) If such an impression is achieved, then the creator has truly achieved presenting a controversy and the opinion he/she roots for (if that is the creator’s intent) while at the same time granting the audience the freedom to form their own opinion.

That, in my opinion, is true art.

Have you included controversial issues in your comic? If so, how did you approach breaching the subject?

Girlsquadx was intended as a very controversial comic. I intended it as a critique of the way in which Jean Baudrillard's writings had an intellectual stranglehold on the New York post-modern art scene. I was going to include a section that questioned Gianni Versace's fashion sense too, but then I realized that that would be going too far.

I'm amused at Lois asking Supes if he'd marry her if she was black. Ummm, Lois honey, at that point in time Supes wasn't marrying you if you were white, why would a color change make any difference?

I've trod on a lot of subjects too. In my comic my protagonist met with hostility and acceptance on both sides of the issue. The villains in the gang despised him for being a mixed race but one began to respect him. And on the so-called good guy side he was met with disdain from many of the townsfolk though thankfully he gained the trust of most of them.

I'm sure I've skirted a controversial subject or two, but a big part of my creative process is not to pass judgment on my characters, and I try as much as possible not to spoon-feed my audience how they're supposed to feel about what they see. The strength of literature is to broaden people's horizons by letting them experience situations they normally wouldn't, and from perspectives they may not be accustomed to. This can open their eyes to aspects of an issue they never considered, and even lead them to reevaluate some of their own beliefs. But when literature tries to push an agenda, and is clearly just the author's heavy-handed opinion thinly veiled behind a tacked on narrative, it crosses the line into propaganda. Personally, I prefer a good satire when it comes to controversial topics, like South Park. Because frankly, we all deserve to be laughed at if we think our opinions really matter.

I don't do controversial things. I guess my comic contains things people would find controversial, but they are never directly addressed or presented as main story elements. Nasty and nice people have varied religious views, varied economic and social classes, race, gender, etc. I recently introduced a genderless character I hope to use more in the future. I have written some theoretical heated religious arguments between a few characters, but it is unlikely I would ever include anything like that in the story -- same thing regarding sexuality and other topics. (Just some of my writing exercises -- never to be shared but help me visualise characters.)

My comic was a response to a family members complete vitriolic reaction when they found out I didn’t think God existed… My comic is a biblical satire, so I’m pretty shore it would count as a “Controversial Comic”. and yes; I am a vary hamfisted creator.

Very thought provoking post. My comics so a lot with human sexuality and identity. And a couple of scenes were considered controversial. And there is some controversy with just the Title of a comic "Mask of the Aryans" even if it is a bit a fluff about topless gladiators, racism, Nazis and communists-- with a Nazi as a tragic hero, an antagonist who could also be seen as a victim? And topless gladiators, all them boobs bouncing about--

Wow, heavy stuff! :D Pinky TA has it subtly- The problems with nationalism, colonialism, and the impact of war on the individual.