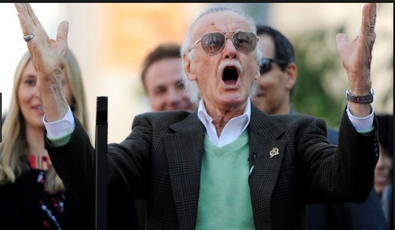 I've given the propers to artists Jack Kirby and Steve Ditko, two of the three fathers of the Marvel Universe.

But we can't neglect the other one. The man. Stan ‘the man’ Lee.

We probably all know this guy already of course, and he's renowned these days as the cameo king in all the Marvel movies (my favorite is probably his appearance in Guardians of the Galaxy volume 2. Too funny).

He worked in comics pre-Marvel, but is obviously a comics icon (maybe THE comics icon) because of the creation of the Marvel Universe. With Kirby and Ditko, Stan brought us The X-Men, The Avengers, The Fantastic Four, Doctor Strange, Spider Man, The Hulk, and on and on.

He's actually a bit of a controversial figure, with some doubt as to how much credit should go to him as opposed to his collaborators. A falling out with Steve Ditko resulted from a dispute over credit. Stan and Kirby were similarly not friends a few years after the success of their creations.

The Marvel Method does leave a LOT in the hands of the artist. The initial idea/story comes from the writer, though some were the artists' ideas (there is documentation of Stan writing someone saying of Doctor Strange “t'was Steve's idea”).

In any case, we know Stan as the one with the vision of an interconnected comic universe, and of more ‘human’ and conflicted superhero characters that reinvigorated the genre. He was the main writer in the early days, and editor in chief and then “president” of Marvel Comics until the company was sold and some of the characters went to different rights holders.

Other than being the cameo king, Stan has been comics' greatest Ambassador, with his old editorials “Stan's soapbox” in all the marvel mags, where he adopted his folksy salesman persona and coined phrases like the infamous “EXCELSIOR!” to end his little essays.

The folksy salesman is the character he plays still, constantly. Though my research tells me that in his personal life, “out of character”, he's a great guy and loved by all.

Like the artists I profiled previously, Stan did not have ownership of the characters he created, and although he's a successful, rich guy, is not the billionaire I might have expected he'd be.

For all the controversy around credit and the truth (whatever it may be) around the created of the Marvel Universe, I believe Stan Lee was the one crucial element to the whole thing. Without him, it never would have happened. 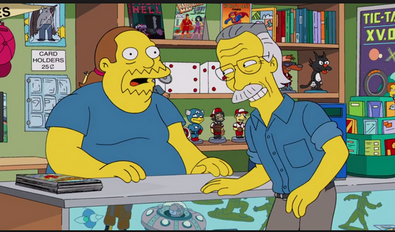 And the dude is 94 y/o. And still seems happy,creative and down to earth type person. I hope to become something like that and still love drawing

Yea, Stan Lee was big deal for my childhood. Pre internet days. Any time I saw his name on some Wizard magazine, I knew there was article i had to read.

Like Kirby and Ditko, I know just enough about Stan to know he was very important to industry and culture of comics, and I can truly appreciate it. These articles really add meat to what I know... My hubz was an avid comic reader and he loves saying 'True Believer', an old Stan catch-phrase!!

I really respect Stan Lee... From everything I've read, and everything I've seen and heard, he seems like an integral part of comic books. I have my doubts to how much actual creativity he had a part in the stories he was most famous for, but you can see... He did his part, and he was smart about it. He planted ideas and Kirby and Ditko, in this case, ran with them.... Sometimes running in wildly out there directions... And honestly that's all they needed. In fact the best thing Stan did was was letting them do their thing. It's also pretty amazing to me that Stan was was part of so many great moments in comics. Stan deserves his accolades and credit. People get down on Stan because his contribution seems easy to dismiss. But what Stan really did was build the Marvel brand. He was the Steve Jobs of Marvel at that time. Or maybe Steve Jobs was really the Stan Lee of apple.People should study what Stan does, because you need that to make something special. Really enjoyed the post,Banes.

It's interesting reading his classic stuff. I was reading some old Silver Surfer and you could tell he not only wanted to tell a fun story but that he had things he really wanted to say about society--and he went about it in a non-snarky, fun but serious way without the pessimism and darkness that would come about 20 years later.

He was at the Mecacon in Tampa last weekend. Would have been nice to meet him. My daughter and I have never been to any of these cons. We were going to go but work prevented us.