How the Dominoes Fall - Tragedy 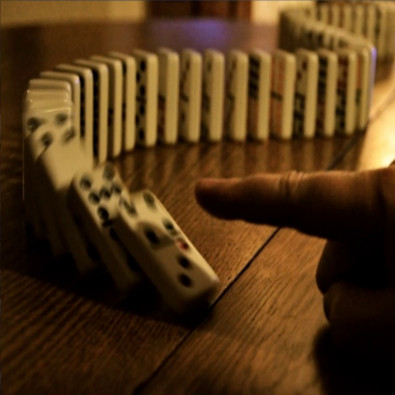 I have made comics’ storylines both ways- flying by the seat of my pants and meticulously scripting everything. So I feel I’m in a position to say that while both methods are valid and extremely fun, the latter one has one advantage over the former: it can make the dominoes fall when it comes to tragedy.

The basic definition of tragedy is an event or sequence of events causing great suffering and sorrow, great distress and grief to the main characters of a story.

Tragedy comes in many flavours, and all of them can shake an audience to the core. There is nothing more tragic than an unforeseeable event such as an accident shattering the happiness of a young couple or a family; there’s nothing more terrible than winning the fight that makes one’s career only to become paralyzed by a cheap shot.

Only in my opinion, there is:

Nothing is more tragic than tragedy that strikes because the dominoes fell.

What I mean by that is not one event, but a sequence of events that might even be seemingly innocuous or unrelated, but creating such a cause-effect chain reaction that inadvertedly leads to an event that causes the tragedy. The bigger the chain of this sequence of events, the bigger the impact to the characters and the audience- in fact the first domino might have fallen during the very first pages of the comic when everything is just still getting set up.

The first domino (the first event in the sequence) is probably all but invisible, silent- a seemingly unimportant, innocent, even irrelevant little trifle of an event. But it gives rise to the second domino (the second event brought about or directly caused by the first) which is a little bit louder. And so on and so forth for the next ones, each falling just a little bit more loudly than the one before, until the final domino falls with deafening noise, the tragedy strikes its grim blow, and everyone that thinks back to what happened, will know why it did- including the audience.

That sort of tragedy is a game changer in a story’s plot. Characters will change, situations and stakes will change- and more importantly, each character’s past will change in how it motivates them in the story: the same events that caused a character to behave in one way before, will be the ones that now will cause him/her to behave in another, simply by the fact that the character will be aware they were part of the chain of events that led to the tragedy that changed everything.

In my work, I have used the domino effect for tragedy (as in Without Moonlight) or for happy resolution (as in my fantasy trilogy The Art of Veiling).

In order to do it, I’ve always had to script things down, the timelines especially. I tried doing a domino effect in Wolf, and forgot why I’d set up the first few events… so I had to race to come up with some other resolution for the story because the one I’d originally thought of as I was sketching a page I had irreversibly forgotten. The resolution worked- it was no domino effect, though, and the impact I’d intended was forever lost. Thankfully, that will never happen in Without Moonlight!

Have you ever employed such a domino effect in your work?

I don't think I've ever written a full tragedy. I have written some tragic moments, though. I've tried completely writing by the seat of my pants once, and it doesn't work for me. I personally prefer having some loose guideline, a set of rules and space to connect the dots. Semi seat of my pants... I don't really think of it as a set of domino events, although it might end up that way,I think of it as objective points, that need to be connected through pacing and building or reducing energy. Tragedies, I just lower the energy, and go to the dark place. That's pretty much the the extent of my tragedy writing tool box.

Awesome responses all of you! <3 Thank you so much for sharing your thoughts.

Like KimLuster and usedbooks, I think you don't have to COMPLETELY write out your story to enjoy the benefits of planning ahead. You can advance on a general skeleton of a story and work out the specifics when you get to them. I use this method to "plant seeds" for later, and when the readers realize something has been carefully planned they usually get a big kick out of it. I don't know if I've ever used this method specifically for the purpose of tragedy, though.

@Kim: I definitely understand. That's how I write. I go into an arc with a set of goals for the end of the arc. How dynamics need to be changed. What relationships need developed or changed, etc. Then I'll have some important scenes to put in and try to fill in the story around them. (And sometimes, I have them in the wrong order and get confused -- or completely lost.) But I try to write down every idea I have because I don't want to lose anything. I don't include everything. I just don't want to lose it.My brain is a chaotic idea jumble. Like three boxes of different jigsaw puzzles' pieces all mixed together.

I feel like I'm sorta halfway... I mean, I have the end goal mapped out, along with the general step I'm going to take to get there, but how those step happen often seem to write themselves. I've started a scene fully knowing how I was going to depict it, only to have it be something totally different when finished...! So, I like a few really Big Dominoes instead of a bunch of small ones... Does that make any sense?!

Oh I love me some domino tragedy! It's that strange, sinking feeling you get when you begin to see it happening but events are too far gone for any one person to stop it. All your left with is praying to the narrative gods above that the characters you love make it through whilst that little voice in your head whispers that they very well may not. The story we're telling now hinges on this quite a bit so we have had to do a lot of planning and outlines. Events have already been moving along prior to when the story begins so whilst our characters think they're afloat a large wave they are in actuality surfing a tsunami.

I always think that the main benefit of a fully written story as opposed to a loser one is that you can come up with a much better ending for it. That's not always the case... because you can lose steam and focus even when something is premeditated and methodical, but at least you have more chance of a good, interesting, dominoe falling ending then. I would like to have that sort of story structure but I don't know if I have the patience.

Oh, and I am always setting up dominoes in Used Books for future arcs and bigger plot points. I worry I might forget what they are for. -_- It's not really a tragedy, but I've been setting up for a significant death for a while now. Still have a few dominoes to knock down.

I don't do tragedy well. My most sincere effort at it was a short arc in Used Books involving the death of Him I'd brother. However, I started writing (and gave up on) a novel that had a lot of that dominoes set up. It was a comedy, though. It was about six very different people from different places brought together by a weird "monster" and united to help it. The dynamics involved were yo set up crisscrossing romance plots in a Shakespearean way. It was called "Strange Creatures."