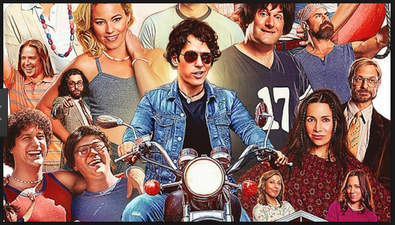 I'm not generally a fan of ‘spoofs’ or parodies. There are a few greats of course, like Young Frankenstein, but even the well-regarded ones like the Naked Gun series back in the day aren't ones I was ever crazy about. There are some funny jokes and good performances, but to sit through an entire one of those movies felt like a chore the last few times I've been around when someone's watching them.

And don't get me started on those ‘Scary Movie’, ‘Meet the Spartans’, etc parody flicks. Sweet mercy. Painful.

But I am a huge fan of, I guess you'd call it “meta” stuff…when it's done well. Like anything, it can be done badly or well.

I've been wondering if it's because I CARE about the characters, even when the piece is clearly mocking the conventions and structure of fiction. It's struck me twice, recently:

In the two series of “Wet Hot American Summer”, (which none of my friends enjoy at all, sadly) I loved the very odd sensibility and sense of humor, and the ‘turning upside down’ of structure and playing with the fact that it's a series, and a screenplay. It's done in a clever way, and a quirky way, which I enjoyed a lot. There isn't a much more meta-series around that I know of.

Yet at the end of the last series, with the last character resolution or two (including the very last shot of the series - no spoilers; it would be meaningless to know anyway, unless you see the two series and maybe the movie - I actually cheered. It made me so happy, despite the way the series regularly reminded the viewer that this was a “fake series”. I still had that attachment to the characters and their plight.

Don't get me wrong; SNL or Monty Python or Late-Night skits don't get to me. There is meta stuff that's just meta. I like it but it doesn't usually touch the emotional part of me. But some other stuff does.

Then again, teen girl squad does not affect me emotionally, other than making me laugh.

Hmm. This newspost is a bit scattered. Do you like “meta”? What are some of the shows/pieces you like? Can you explain Meta better than I have, here?

(this one got a bit rambling; I cut a big chunk of it out. You're welcome!!)

The best ones are the ones that can be stand-alone stories that just make numerous joking references to the source material. The weak/bad ones rely too much on the source and is nothing but a twisted mirror of the original.

And no one has mentioned the Muppet movies. Muppet Treasure Island was a magnificent send-up of period pirate movies. There's great meta bits in all their movies including the semi-faithful ones like Muppet Christmas Carol. My favorite remains a Very Merry Muppet Christmas complete with Hurl Ives wanna-be narrating snowman and great references to the whole Muppet series up to that point. And some if the writers went on to work on all those parody movies like Another Teen Movie and my favorites Hot Shots! "I had to come, it's the sequel. " If you have ever watched Airport, then watched Airplane you'll see the delicious delight as they tear it apart scene for scene. Makes the next viewing even funnier.

The Office and the looking at the camera thing: that comes from the British version. The British Office as designed to be a parody of the workplace documentary reality shows that the BBC and ITV were putting out at the time. The American office was a direct copy of the formula, but they didn't have that same history of BBC workplace documentaries so it's really weird. Parks and Rec was made by the US Office people I believe and again followed the same formula... it worked better there but the whole speaking to camera concept was still a bit of a non-sequitur.

I had a hard time enjoying Wet Hot American Summer because I never really got into the kinds of movies it was spoofing. But there were two specific gags in it that got me to laugh. And that's it. One of my favorite spoof movies is Galaxy Quest. I feel like it it was successful in making fun of Star Trek AND in being its own movie.

It is kind of a slippery term; I don't think I have a solid feel for what defines 'meta'...I liked not another teen movie, too!

Ha, honestly this a topic I've never delved deeply into... I guess I always considered 'meta' to be a little more high-brow or subtle form of parody. I'm even a little timid in terming something 'meta'. Is the TV Show The Office 'meta' (I love how the actors often glance at us, the audience, through the camera when conveying a particular emotion moment. Feels so surreal and bizarre). Is the Dark Tower series 'meta', when Stephen King puts himself in the novel, and it's heavily handed given that he somehow created the Dark Tower universe and must 'complete it'). In a story I loved for the most part, I didn't like that AT ALL!! Oh, and I love do love me some Monty Python and Naked Gun!! Not Another Teen Movie was hilarious as well...

Is breaking the fourth wall a special flavor of meta? Because I think it's my favorite flavor. It can be misused or overused, but some characters do it right (best if it's just one character in the universe -- like Bugs Bunny and Deadpool).

Yeah, they did a "Ten Years Later" series! Not as good as the first series but still good and is a satisfying conclusion for the characters. I agree with Ozone on the watch-order: movie, then the prequel series, then the new series.

Thanks for the very interesting comments youze all!

I have always loved the Naked Gun series and I get what you mean about getting attached to characters. Like I always say, a character is a work of art within itself. I guess metas like that succeeded because the author obviously loved what he was doing while others fell flat because it was just a shot at making fun of something. I guess people who make metas tend to forget that even metas are still a show so you need to put love into it for it to work. I mean, even Month Python which is comedy had respect for itself in that we are laughing with it and the movie production was done with fun and joy. People loved making the show not making a mockery.

Not sure about the whole meta thing. Wet Hot American summer sounds as if it would be worth a look. You say there are two series and a movie? Are they chronological? Is there a preferred order to watch them in?

The difference between something like Hot Fuz and Wet Hot American summer is that they parodied that camp genre in a new way, with people who were deliberately adults, and the summer camp genre hasn't been parodied like that for quite a while so it felt pretty fresh... They had a great mix of very retro 1970s stuff with things that were modern which was great as well.

Both Shawn of the Dead and Hot Fuzz are meta more than parodies, and I didn't like that because of that. Shawn is a meta of the Romero movies as well as Spaced, but to me it felt like an extra long episode of Spaced without the energy or the fun character dynamics, it was just like "OK, now for this episode of Spaced we're going to pretend it's a zombie movie.... With Hot Fuz it was a meta of all the hundreds of British crime and mystery shows with a weak British spoof on American 80s cop movies sprinkled over the top. The problem for me was that British TV is ALREADY fully aware and fully meta over those mystery crime plots so that the exact plot of the movie has been done and done dozens of times before in the same way, it was stale.

I loved Wet Hot American summer! Is there a series that I haven't seen yet? I saw the one that leads up to the events of the movie... LOVE it if there's another!

I don't distinguish between the two. "Meta" gags are merely a tool in the parodyist tool kit. Like the end of Blazing Saddles or any number of Python sketches which were not just parodies of certain genres and eras but BBC-TV dramas about them. And then there's Black Adder skewering eras and historical figures as it parodies the history as well as our notions of it and making sly asides to the audience. Meta is only a tool of parody.