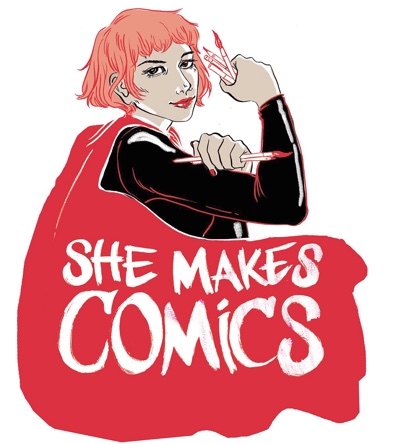 While searching for the perfect show to stream one evening, an interesting title popped up on my Queue list. It showed a Rosie the Rivetter inspired drawing with a paint brush and the title “She Makes Comics” written below it. As an avid fan of documentaries AND comics AND a female, I decided to give it a shot because it might be pretty relatable. I never thought about the comics industry as being a “Boy's Club” but I guess comic characters like Cathy representing the modern women shows that there is room for improvement.

The narration begins with the history of print comics and how children used to read so many comics during the WWII era. At this time, there were many different genres available like romance that could have appealed to girls. In fact, 45% of comic readership were boys and 55% were girls. Then a turn to superhero comics gave rise to the Big Two (Marvel and DC) where the role of women was turned into a damsel.

But the documentary went on to include so much more–it interviewed women who worked as comic artists for the Big Two. It was incredible to discover that Aquaman was drawn by a lady! It also talked about how X-Men comic books from the 1990s focused on character backstories to give many of its females well-rounded personalities. This would explain why characters like Rogue and Psylocke are so intriguing.

In addition, Karen Berger, former editor of Vertigo (DC Comics), was also interviewed and described her role in how she was able to get non-superhero comics like Neil Gaiman's Sandman, that had strong females protagonists, into the mainstream.

Three professional cosplayers gave their insight on the double standard between women and men that are part of a fandom–men are not judged as hard as women if they do not know every little detail about their fandom. The documentary talked about Manga and how it was instrumental in including a female readership by having genres that appealed to girls and women. It even ended with a mention about webcomics and how the Internet has helped leveled the comic playing field for women.

One of the greatest takeaways was how one of the professional comic artists made a statement that people never took her seriously when she said she drew comics, instead people wrote it off as a hobby. However, groups like “Friends of LuLu” have paved the way for women interested in making comics. There has been a noticeable increase in girls applying to art schools and a more supportive atmosphere for female students interested in pursuing the arts.

Joan Hilty, former DC editor said, “You are entering a Golden Age of breaking into comics if you are female.”

.::.
What's Quacking?
Do you have any original art to contribute to our stock image database, announcements, community projects, ideas, news, or milestones to report? Please leave general comments below or send a PQ to kawaiidaigakusei. Email me at kawaiidaigakusei(at)gmail(dot)com.

Interesting! I decided to include a female protagonist, which right now I'm still developing her attitude and background story. Also, I'm trying to make my story more appealing for girls, that means some fanservice for girls too XD

Interesting! Yeah, I've heard of this movie, might have to check it out. I remember a few female stars in the comics world back in the day like Louise Simonson and Ann Nocenti but there are definitely a lot more now. Fiona Staples is one of the best comics artists working (and Canadian t'boot!)

I have to admit that the high population of female webcomic writers and female positive webcomic writers encouraged me to come out of my shell and start posting online. When I was a teenager, I was mocked and outcastes for liking comics while still being feminine. It is so refreshing to be able to be a comic writer even an amateur one without sacrificing my love for shoe and purse shopping. When they said feminism is about choice, they didn't mean having to choose between.

What an interesting and intriguing article!