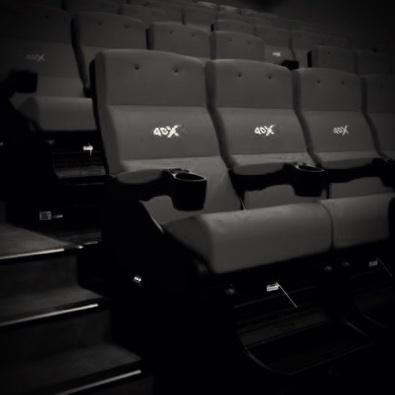 I think I spent my Saturday night the same way as plenty of other people did–in a movie theater watching a film based on a book by Stephen King (and No, I am not talking about The Dark Tower). It is still September since the last time I checked the calendar, which is hard to believe based on all the horror films that have been released back-to-back. We still have a few weeks until the Halloween season is here to scare us senseless.

One of my local movie theaters now has a 4-D screen, which is where the seat moves and rotates, punches your back, and splashes water and scents in your face. I knew that seeing a horror movie this way was the best due to the unexpected movements.

Now here's the thing, I really get into the movie watching experience. I am not a stranger to screaming whenever a jump scare happens on screen (and it happened a lot last night). However, I did notice something that was a bit peculiar and almost troubling. There were a number of scenes when something horrific appeared on screen and my first instinct was to laugh hysterically instead of scream. I must have laughed throughout nearly forty-percent of the film that passersby would have thought I was watching a comedy. I knew my laughter was happening during inappropriate times because I noticed I was the only person in the theater laughing during the scenes.

I have always been a fan of scary shows with a lot of jump scares. I might have watched enough paranormal shows that have jumbled my emotions to have a humorous response instead of a scared one. After looking up the topic of inappropriate laughter and reading a few forums, I have come to the conclusion that laughter can be used as a way to release the stress and nervous tension that builds up during suspenseful events.

Long story short: I went to the movies, watched a film in a moving chair and laughed so much you would think it was a comedy instead of a horror. This must mean that the part of my brain that controls emotions is confused (or that I might be a psychopath).

I never could get into Horror films. As much as my wife watches them, i just couldnt. Now those Suspense, kidnap, murder films those get my emotions running.

Excellent post! I'm a big fan of the original movie and I wasn't expecting much of this movie (I don't know if 'remake' is the right word), so I definitely will go to see it!

IT was a lot better than I thought it would be XD It was actually a solid movie. I really like how they made Pennywise move. Vary unearthly… They also did a lot better job at making you like the main characters than most horror movies do…

Let me elaborate on my review: It was like The Goonies, but instead of searching for One-Eyed Willie, the group of kids is trying to find John Wayne Gacy.

I give it two thumbs up, Way Up!

did you like "IT" by the way? From the sounds of things, it oughtta be quite successful. Lots of people seem to be excited to see this one. People on the streets are buzzing about it. A bit surprising!

I used to think Stephen King was the pseudonym for composer Johann Sebastian Bach. Not really.

Funny, I just watched a review of IT and there was some discussion of jump scares vs. subtle fear. Interesting post! So, these jump scares - did you jump and then laugh? From what you write in the article I guess not. From talking to you on some podcasts, I notice you are prone to laughter, which is not a bad thing. I don't get a psychopath vibe from you at all, for what it's worth. XD

I saw Texas Chainsaw massacre 2 and 3. Two was a parody but 3 but actually chilling.

Fun Stephen King 'fact'. Once upon a time a lot of people were convinced he was the author of Jonathan Livingston Seagull, and other books, written by Richard Bach. This was because King had written under the pen-name Richard Bachman, and it was easy to confuse the two. So there you go, the internet (an Wikipedia) has made our lives better. In that one specific instance at least.