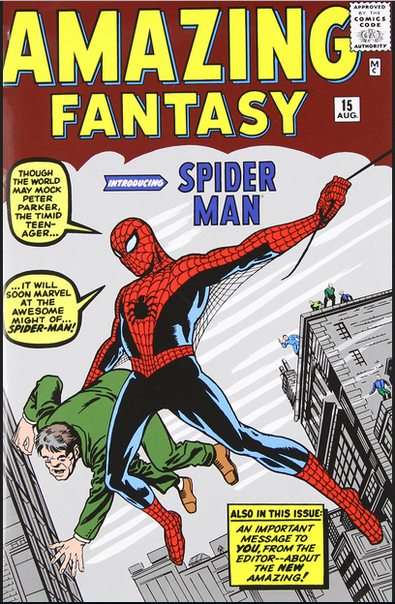 One of the greatest comic book stories ever written, by Stan Lee and Steve Ditko

Stan Lee and Jack Kirby are known as the main architects of the Marvel Universe. But there was a third originator of that landmark creation:

Steve Ditko was an artist who originally worked as a comics artist in the 1950's, working on the science fiction and horror books of the time. He worked with Stan Lee on several short comic stories during those years.

When Stan and Jack began the Marvel Universe with The Fantastic Four and The Hulk, there was an idea that Kirby seemed wrong for, so Stan worked with Steve Ditko on Amazing Fantasy #15's first Spider Man story.

He was the first teenaged superhero (not a sidekick) and was weighted down with real life problems with money and girls (and the guilt over his uncle's death due to his own arrogance). He was also a wisecracking motormouth during his superheroics. Spider Man was almost certainly the most recognizable character Marvel Comics had, at least before the movies made all the characters so much more famous. 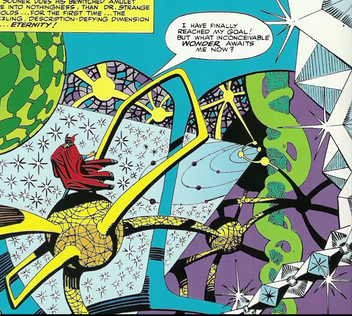 Never a huge hit compared to the other titles, Doctor Strange did become a cult favorite largely because of its psychadelic visuals. I read an article that amused me with it's account of Ditko meeting some of the hippy fans of Doctor Strange and being as shocked by them as they were by him - Steve was apparently extremely conservative and straight laced, despite his massive imagination and creativity.

The movie version of the Doctor took great pains to pay homage to those Ditko visuals.

Ditko created many other characters too, of course: The Blue Beetle, The Question, Squirrel Girl, and many others, including of course the Doctor Strange supporting characters Mordo, The Ancient One, Eternity, Dormammu, and so on, and a part of Spiderman's extensive and classic rogues gallery and supporting cast.

He split from Marvel in the 70's, and though he still works on comics constantly, they are more independent ones, sometimes crowdfunded, and apparently centered around his politics. I haven't read them.

He's an unusually private person, and has not given an interview since 1966, despite obviously being pursued for them many times. But at 89 years old, Steve Ditko is still going strong, and his contributions to the field are truly legendary. 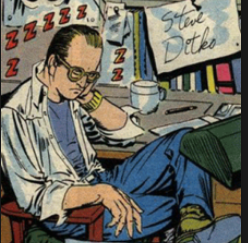 That's what I thought! My pleasure ^_^

Abt - I read the article you suggested...wow! Ditto is quite a fascinating character! Thanks for sharing that!

Thanks, Abt! I look forward to reading that!!

His influence will live on through Marvel and the characters he created.

What a classic answer on that mini-interview call!

I read this article when the Dr. Strange movie came out and found it pretty interesting: "The Creator of Doctor Strange Will Not See You Now - Marvel Comics legend Steve Ditko wants his work to stand for itself. If only it were that easy." (http://www.vulture.com/2016/11/steve-ditko-doctor-strange-c-v-r.html)

@KAM - ah! You're surely right. Thanks for the info! We make a good team; I misinform, you inform! :)

Once at Half-Price Books I came across a book of Ditko's, The Mocker, I almost turned it down because his '80s work wasn't as good as his '60s work, but I got it and was surprised because it was so much better than the stuff he did for DC & Marvel. So I figure he put a lot more work and love into the stuff he owned than the work-for-hire stuff he did for others. Hehehe ;-)

Yeah, reprints of Ditko's work on Spidey and Strange were part of my comics growing up. However, Spider-Man was not the first teen-aged hero who was not a sidekick. The Star-Spangled Kid and Stripesy featured a teenage hero and an adult sidekick. Superboy had a career starting in the '40s. There were also a few solo teen heroes who would pop up in various publishers' books. While Dikto created the Ted Kord version of Blue Beetle, the original version first appeared before Steve was working in comics.

The first issue of Spiderman! American Pickers was on last night and Mike found this issue in a old garage and bought it for like 500 bucks...actually I can't remember what he truly paid but it was in the hundreds. They said on the show that the first superman sold for like a million at an auction.

It would be great, yeah! I read an article where a comic pro managed to get reclusive Steve on the phone and Steve was very nice but said he doesn't do interviews. The guy asked "why don't you do interviews?" and Steve said "great question! Unfortunately it's an interview question and I don't do interviews." End of call. xD

Well I'd heard of the name but didn't know that much about him! Never knew he had such a hand with Spidey and Doc! Seems like my kinda guy!! :D It would be great if he'd do one last interview before he passes on!!

thanks ejb! Yeah, I read that the cover was Kirby after making this post. Oopsie!

Ditko is definitely a legend. His style and design sense is quite unique. Those seemingly odd hand gestures he drew for Spider-Man and Dr. Strange became classic parts of those characters. (One quick note though, that first cover image was drawn by Kirby and not Ditko. The interior story pages were his, though.)