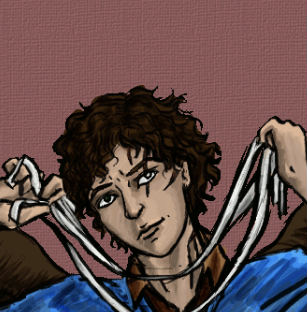 A discussion at twitter (you should be there! If you haven’t looked for @Drunkduck you should, add DD and you’ll be added back!) brought to my attention a very subtle but very aesthetically and narratively pleasing element that, when we take the time as artists to factor it in, gives the audience more immersion, and more engagement:

Characters that age, change and develop visually through time.

Kids grow up. Fighters get scarred. An illness leaves a permanent mark in a character’s stance or stamina that distinctly hadn’t been there before. Hardship changes the ‘resting face’ of the character (often from ‘pleasant’ to ‘bitch’). Time soothes scathing, lancinating emotions… or twists them into poison, and that shows in the eyes, in the scowl, in the expression of the face as a rule.

Sometimes (I won’t say often), and especially in mainstream comic staples such as Asterix, Tintin or Lucky Luke, the characters never change visually. They remain the same without aging a day, without acquiring any scars and without acquiring any lingering effects from any of their adventures. And that doesn’t matter in those particular examples because the stories are episodic and not arranged in any linear manner or meant to aggregate to some sort of character development. They are anecdotes, in a sense, of the same static character put in different situations and through different adventures that wrap up neatly in the end, going full circle with a banquet, lounging about at Marlinspike or riding off into the sunset.

But when a story is structured differently, and characters are meant to go through the ‘hero’s journey’ (or several times over through that type of journey) and the world they are in with them, it adds a bit of spice to allow the character to visually change as experiences and events happen to him/her, exactly as it happens in real life. It gives not only authenticity to the character’s experiences and plights, it also serves as a nice symbolism of what the character is going through.

So how about you? Have you been altering your characters’ appearance as your story develops? Do you have the opportunity to?

An author can also have their characters pick up new accessories over time, and change their clothing or hair. This is a good way to keep the character visually progressing even when not enough time passes to show age, or no battle scars are happening. That's the kind of stuff I have to do with my characters, since the story happens over a short amount of time. Stories sometimes have a character drastically change their appearance when they've turned over a new leaf. It's a bit trite, maybe, but it's something you can do.

Definetely it's something I want to try in my comic! Amazing article!

Excellent article! I'd never thought of this before, in terms of comics, but physical changes to show the 'mileage' on a character. Doesn't totally fit my episodic/comedic comic, but it's something to consider anyway - maybe subtle changes could still have a good effect.

My characters actually change their clothes too. If the time frame of a story is long enough there are changes. I even a scene where a character was upset that a change wasn't noticed.

In my comic series I worked on in high school (Ront), I would have the interactions between the mane character Ront, and his arch nemesis Thok at least one of them wold get a lasting wound; usually missing limbs… the only problem with that, is that it isn’t long before both characters are complete cripples.

GREAT article!"Have you been altering your characters’ appearance as your story develops?" Yup, the main characteristic of my protagonist is the constant transformation, and it reflects her appearance.

The Godstrain took place over a several months (five years of RL time haha), so there was no changes in appearance due to age, etc.... But I did let things change depending on how characters changed inside (Kimber Lee, once she accepted her lot, kept her hair short and practical, while her husband Emilio let his grow longer, maybe because all the turmoil made him care less about his appearance...)

My characters change gradually (or dramatically) frequently. Seiko lost a piece of her ear early in the story. It's simply part of her design now (and has been for ten years). Fudo changes much more subtlely from the start of the story. He's become less gaunt, his hair has grown out, and much of his expressions have changed (unless he "sees red," so to speak, and the old Fudo appears). His character has developed and I wanted the visual development to go hand-in-hand. Toyo and Caroline changed in very dramatic ways (after attacks), which also left Toyo disabled (but unchanged personality) and Caroline's personality scarred/altered. Kaida's scars are hidden. And Mike has no obvious visual change, but he has physical limitations due to past injuries. Other characters never change (Yuki, Raidon), which is also deliberate. I also try to make flashback points more apparent by differences in character appearances (younger looking, facial hair, hairstyle).

I couldn't agree more. I intend to put scars on my characters too and that is a big deal because Jekyll and Hyde share a body. That and I wanted them to do something with their hair.

Similar to Kari_McElroy Pinky TA tells stories from different points on her timeline. The first chapter of Pinky TA is a lot further in the future than the current chapter I try and draw pinky with a rounder, softer face in the current chapter. In the ones where it's further forward in time like the first few chapters and part 7 she has a much more angular look. She hasn't yet got her ear plates in chapter 6 either or any of her tattoos that show up in the first chapters... (though I forgot to add them back in part 7). Part 6 also showed where she started cutting the bum out of her trousers... Any chapter that follower 7 chronologically is going to have to show massive scarring on her thighs.

Little. Wouldn't fit on end of last comment. It appears I may have become a touch verbose.

It's something I've always liked in comics (and other mediums tbh) in fact I would go as far to say it sort of irritates me when it doesn't happen. It works for some comics, by their nature they don't really need to change, or rather changing them alters the charm and often lessens them. More dramatic comics benefit from it although for long running mainstream comics it has proved an issue, especially with continually changing creative teams. Star trek is another example, earlier trek series rarely showed any character development or physical change beyond the actors aging. For my work, it isn't something that's been shown all that much, but much is down to time periods shown. Although Baso has probably done the most. Harriet losing her forearm, and to a small extent her body language changing due to her experiences. Margo had lost a little weight after being removed from her life of comfort. Jonathon has become more imperious as his fortunes rise and his body language reflects that a

My story consists of flashbacks as well as an ongoing present narrative with multiple threads being pulled, so I cover a wide variety of ages and life circumstance with my characters. It's really difficult, but also very rewarding. I think it's fun for the reader to see how my characters change throughout time and circumstance, but it's also important for me as an artistic challenge and as a means of creating a more well-rounded story.