The Origin Stories of Webcomics | Part 3 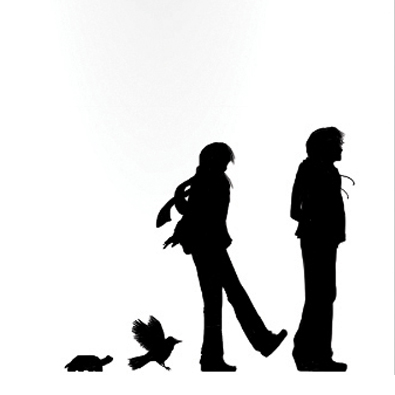 So here we are.

The end of the journey.

Settle in kids because this is looooong. I’m going to get a bit real and it may be confronting for some people so I just want to warn you.

I was in my final year of university, completing my honours degree and something happened. I began to develop depression. My final thesis project involved producing a creative work and a supporting, written exegesis explaining the reasoning behind it; suffice to say I had to pick webcomics as my field of study.

As for the creative work? Well you can actually read that here on DrunkDuck. “The Day a Bird Followed Me,” bookmarked the beginning of a spiral I had yet to realise I was slowly descending into. Looking back on the work now I can see the hallmark signs but I couldn’t then as it was gradual; everyday was just that little bit harder but only very slightly. It took me over a year to realise what had happened and that was only after it was almost too late.

The Day a Bird Followed Me is far from my best work and yet, I somehow managed to get a fairly high mark for it. There was a lot of soul there, more than I realised at the time, for then I was blinkered; zeroing in on that ever looming deadline. For six weeks I slept no more than five hours a night and when I was not producing my work I was writing about it. Despite lacking the quality time would have afforded me, I am still proud of it. That was me in that moment, unknowingly adrift about to lose my unwavering direction that, up until that point, I had taken for granted. I had known where I was going and how to get there and now, in my mid twenties and nearing the end of my formal education, I had no fucking clue where I was in my life and that comic embodied it all before I knew that was how I was feeling.

I was more than thoroughly burnt out from completing my degree and yet I launched straight into building my career as a graphic designer by becoming employed in a high octane, corporate office. I was up early to get to work on time and late nights became common. Getting home at 9pm, sometimes even later was no longer a rare occurrence. I was often too tired to take note at how much it was impacting me, I was only focused on getting through the day.

But let’s rewind slightly, to a few months before I finished my degree.

This part of my journey as a webcomic creator is one hell of a detour but it stands as being the most impactful roads I somehow found myself travelling. One afternoon, on a whim, I began wandering the forums over at Gaiaonline and stumbled upon the literary role play section of the website. Whilst I was familiar with the concept of an RP I had never participated in one myself and yet I had found what seemed to be the perfect thread. It was pulp. Think Bold and the Beautiful/Young and the Restless and then inject it with a megaton of teenage angst and you had this bizarrely addictive roleplay. It was utter junk food and I could not get enough of it. It took over my spare moments. I got to know the members of the group and before long I was more or less running the place and loved it.

I hadn’t written in some time (think high school) and here I was typing thousands of words per day. I fallen in love with writing once again so much so I began doing short courses to improve. But there was a flip side to this whirlwind of a romance. My depression which, up until this point, had been on the peripheries, morphed into an all consuming beast I could no longer control.

Before I go on, this next part might be triggering so feel free to skip to two paragraphs down.

One evening I had an anxiety attack on my way home from work. I got off a stop early because I could no longer be on the train and began walking to my flat. I remember the evening being overcast and dully lit and the air was difficult to breath, as if it was sticking to my lungs and I could not get it out. My vision narrowed to just my feet, one step in front of the other. I was close to my home and there was a road in front of me that I had to cross and I realised, it was here that I had an important choice to make.

I felt I couldn’t live with how I was feeling and I had to choose. Keep walking knowing I wouldn’t reach the other side or back away and hope that the feeling goes away, at least enough so that I could get home. I was very tired. I couldn’t see very well anymore. And I really wanted it to stop.

You know now what I chose, but I will be candid, that has been one of lowest moments of my life so far and I have never been been that desperately exhausted or soul crushingly afraid since.

The next day I got help but it took me even longer to begin to piece my life back together. It took 18 months to get to that point and it has taken three times that to finally feel like myself again.

Throughout this time, I continued to write, to spend a worrisome amount of time on that forum, with that group of people, who looking back at it, were all looking for some form of escape from a difficult time; but there was one who needed more than most, and lord knows there is no being on Earth that would have enough to satisfy them and yet there I was trying. My recovery didn’t truly begin until I had removed them from my life and I wonder if being exposed to someone with Narcissistic Personality Disorder had lead me down that path more so than I might have done if left alone.

I left the group to save my mind. By now, I had lost who I was. I no longer wanted write, no longer wanted to create and certainly no longer had the will to do the very thing that brought me the most joy, comics.

But it was also during this time that I met someone who went on to be one of the most wonderful and encouraging friends I could have ever asked for.

SJ and I met on Gaia and continued to write with a few others after I left. Our characters had fallen head over heels for each other and we could not get enough, but it seemed with every attempt we could never finish their story. After the third and unfortunately last roleplay fell by the wayside we were musing over how strong the story had been that time and that, if further developed, might be worth telling to more than just ourselves.

She said offhandedly (to this effect at least), “This would make a pretty good webcomic. But I wouldn’t even know where to begin,”

And so, completely in over our heads, we began writing “The Constellation Chronicle”. She had, unknowingly, handed me that last piece I needed to finish putting myself back together again and I have never been happier than now, working away on this story, seeing all the lovely comments and being part of the community I have loved for so long and who, even now, give me the platform to connect with you all and explore new ideas.

This is more or less a good place to end this epic and more than self-indulgent tale and I apologise for the ridiculous length. But to split this part up would do it a disservice as it was a time where my world melted and molded together that to try and pry it apart is quite difficult. So thank you for being patient and for reading.

Next week we’ll be back to our regular programming.

And to all of you out there, wondering if you’re good enough to start a webcomic to you I say, it doesn’t matter. Because your journey as a creator is a weird and windy one and you’re always going to be better tomorrow than what you were yesterday.

Till next time lovelies!

Thanks for telling this story - powerful stuff and good for you for finding your way through those struggles - and for getting back to making comics.

Hey Emma! I'm one of your readers (The Constellation Chronicle). It was intense! You realized one of the most important things: doing what you think you should do, and still so young! When we're in the darkest moments and that passion is still there moving us forward, it's a signal. It's your call. And I'm glad you decided to stick with your real you (I'm talking it from the bottom of my heart). Webcomic sucks? I don't think so. Publishers are trying hard to figure out how to monetize it so the creators could stay doing their comics. Printed comics aren't so profitable too, but it's a good way to connect with audience.

Very intense!! Let's just say, after a couple divorces with kids involved, I very well know these dark moments you speak of. I didn't really write anything during those moments, but once a cloud lifted I quickly made up for. As I've said before, if my stuff has a therapeutic value (which it probably does) I'm not consciously aware of it, but I'm aware my subconscious does things all the time without my knowledge, sometimes to my detriment, but often my benefit!!

Intense and I do identify with a lot of it and have been to some of those low points. There's coping and taking it a day at a time . As for doing a web comic? It's crap, it always will be crap and it will never be good enough, but do it anyway.

A very intense read! Very intense indeed. It makes me remember back to what was going on when I first started posting Pinky TA in 2004 on DD... I'd just been doing a masters course at Uni at the time but I couldn't finish it because I was was feeling too anxious about it and depressed and I was obsessively playing online games to cope... I was just starting out with Pinky TA too. I eventually got my crap together though and exited my courses with a lower qualification. Webcomicing just became more and more of a passion. I decided it was more important than my other art and professional work. XD