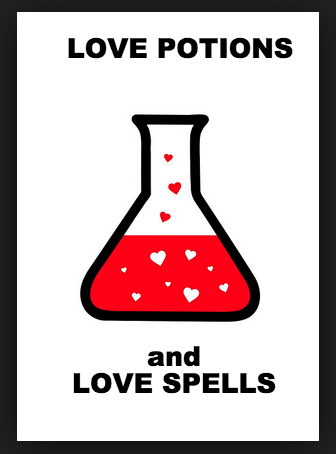 Love spells have been a part of literature for a long, long time. A Midsummer Night's Dream comes to mind, by that William Shakespeare fella, where a love triangle/quadrangle is made more complex when the wrong target is affected. The correction has only one dude under the spell, which makes for two happy couples. This “happy ending” ignores the fact that the guy has been spelled against his will - that would be a less likely ending in a modern piece of work, unless it were an all-out comedy.

Generally, the love spell or love potion causes chaos, at the very least embarrassing people or turning their lives temporarily upside down. Either the artificial love wears off or is counterspelled, or they lead to bad results.

Or, like in some Twilight Zone/Tales from the Crypt/Buffy the Vampire Slayer (and on and on), ALL the women (except the one you wanted) pursue you and decide if they can't have you, they'd rather have you dead!

The love springs in the Xanth series, when drunk by main characters at least, usually wore off eventually, though with some heartache for the poor folks involved.

It's hard to imagine any love potion scheme ending up with worse consequences than it did in the Rick and Morty
episode “Rick Potion #9”!

Maybe the “love spell” motif exists as a “be careful what you wish for” parable. Or maybe it's teaching us that you can't artificially force something to happen.

Or is it an allegory for the temporary infatuation we sometimes feel, that can lead us into trouble sometimes? Or is it just a fun way to get characters into some temporary, titillating trouble?

I have to think these stories are SOME kind of cautionary tale. As the great Tone Loc told us, you don't mess around with that Funky Cold Medina!

Are there any love potion/love spell stories you've enjoyed…or do they annoy you? Ever written a “love spell” story?

I always found the idea of a love potion to be strange. Along the lines of "soul mates" or "one true love". Apart from the free will argument, I find that at times it renders human relationships reductionary. There's something wonderful about seeing a relationship bloom and develop. But I suppose it depends on how you want to use the love potion device.

I'm with Kim- the destruction of free will goes against the grain for me. I find it creepy. I remember in Xanth that it was used interestingly to explain creatures like centaurs, griffins and chimeras etc: all creatures and humans started out as normal people and animals, till the love springs made them create strange babies XD

While I can step back and enjoy the comedy of Love Potions, I guess I'm one of those that it kinda annoys. Anything that wrecks freewill, makes people do things they wouldn't have chosen otherwise, well... it destroys my universe haha!! Maybe a bit overdramatic, but seriously, I believe that we can always say no and walk away (although it can be the hardest thing we ever do. I think that's why I hate some time-travel stories too, or destiny/fate stories, where you're gonna do a future action, no matter how you choose to try to will it otherwise... Grrr... That said, Midnight Summer's Dream is hilarious!!

I've been toying around with doing adaptations of "Tristan and Iseult " or Chretian de Troyes "Knight of the Cart" or a take on the Celtic version of the Melageant/Melagaunce (no Lancelot) episode from the Arthurian legends with a twist I saw in the Fate anime series. A female Arthur.

I had one idea for it, but with a twist. It seemed to not work on the couple as they continued acting the way they always did, but then when people read the instructions on the love potion it turns out it had one exception; it brings no changes to the behaviour of two people who are ALREADY deeply in love. In other words, the couple was deeply in love the whole time, they were just going through a rut and became convinced one did not love the other. Of course when the love potion confirmed love was there, the realisation that they misjudged each other made them more affectionate. Sometimes it's not that love is not there. It's that sometimes we need to learn how to act when in love.

There has really never been a decent modern adaptation of Tristan and Iseult which is really a shame because it is a good love story. One good theme with the better love potion stories is that the potion only supplies the initial attraction and wears off and the couple find themselves in love for real. It's only a plot device to introduce "forbidden love" between two who just shouldn't be in love because of nobility, feudal obligations and marriage. Strangely though Lancelot and Guenevere never had a love potion but instead followed the rules of courtly love. Since the story of Tristan and Iseult predates courtly love it used the potion. At least according to my Arthurian romance professors.

The two Twilight Episodes are "The Chader" and "What You Need" . The Chaser is great because he gets the girl but she won't leave him alone to the point where the Boot cleaner becomes necessary.

Tristan and Iseult which is an ancient Irish story later adopted into the Arthurian cycle as well as Tristan and Isolde by Richard Wagner. The music of that opera is some of the most haunting romantic music ever and might be best remembered for its use in the movie Excalibur as the love theme between Lancelot and Guenevere.

I like the song Love Potion #9. (They actually did an animated cartoon based on the song, but I can't remember if I liked it or not.)