On boredom and the slip into daydreams 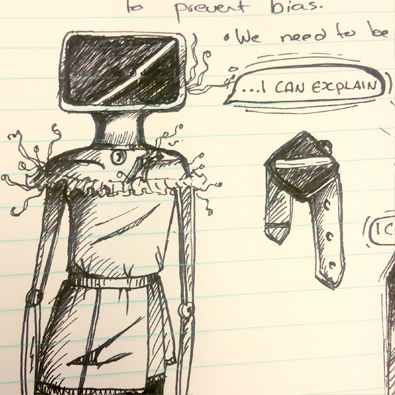 In my day job, I am occasionally asked to attend events or webinars as part of professional development. Earlier this week I happened to be at one of these activities focussing on the future of artificial intelligence, which you would think would be a riveting topic for discussion. But soon enough my note-taking gave way to mindless doodling without me being fully aware that I was doing so.

The bottom half of my book was soon taken up with robots, devices, and callbacks as my mind began to wander into daydreaming territory, imagining robots with televisions for heads, smart watches and rings that can monitor your health, not unlike a mood ring. I began exploring how this could be worked into our current projects and what the story behind this scribbles might be.

It is all too easy to fall into the addiction of needing a point of focus mostly concentrated on our phone usage. We are constantly seeking distraction.

Remember being bored as a kid and being told to go find something to do or occupy yourself? How often do you allow yourself the freedom to be bored now? Do you have the time anymore to find yourself at a loss for what to do? Can you remember the last time that happened?

I can. It drove me to distraction funnily enough and that amused me. I had been so well conditioned to crave distraction that to have time to think, the very thing I had been telling myself I needed, was now overwhelming. So, for a moment, I allowed myself to be bored.

And soon enough I was slipping into daydreams. I let my mind wander. Conversations between characters, tragic and heartwarming moments they could experience and the places they would go sprang to mind and, for a time, I was more than entertained.

Of course, this lasted half an hour before I remembered there was a video I was meaning to play.

But for a time, I had the space to be bored and let my mind slip into daydreams.

Have you had ideas that sprung from boredom? Share your experiences/doodles below!

Till next week lovelies!

Great article, Emma! (I remembered that cute bot on The Constellation Chronicle instantly.). I got used to be into daydreaming when younger, maybe 6 or 7 years ago. When I started to learn game designing and game development, everything just vanished from my mind o__O. I'm not into daydreaming anymore. I don't know why it happened, but since that, my memory has increased A LOT too. It's a pity, because the daydream was useful for characters' development and dialogues.

The constant companionship of the smartphone definitely helps with boredom, but I've noticed some ill effects from it, and have had to make extra effort to go for walks without the phone, and not jump online instinctively every time I'm bored. It's deadened my creative powers somewhat, so moderation is certainly something I need !

I'm rarely bored, as I often drift off into my imagination... Of course, that has resulted in many near-automobile accidents!

Hahaha, I don't like being bored. I love this world where we are now, that there's no longer as many boring times.I used to draw a lot of doodles while in class back in the day and come up with some funky designs for outfits and things... I still have them somewhere.