Nothing Under the Sun 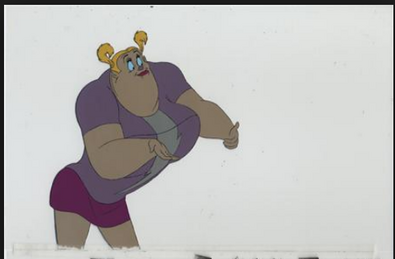 A friend of mine, many years ago, showed me a cartoon that was fascinating, funny, and horrifying. In my memory, it was the first anime I'd ever seen. I'd forgotten most of it over the years, and would try to find it once every so often, without knowing the title or any character names or anything.

Finally, as the Internet became more and more comprehensive, I found that it was not an anime, but a Canadian made cartoon called Rock and Rule. I watched parts of it online, and it was nice to catch a little piece of my forgotten history!

What surprised me about it, though, was how much a minor character named Cindy (see picture above) resembled my own beloved character Penelope! 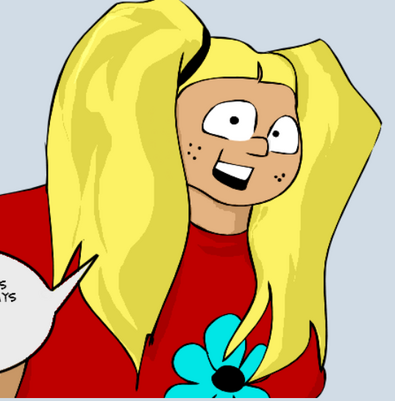 Penelope is one of my favorite creations, and I was stunned to find a character that resembled her so closely, both physically and personality wise.

I'm aware of many of the strong influences on my own comics, but it freaked me out to learn that there were influences I had no conscious memory of!

What are the big influences on your comics? And is there anything new under the Sun? I kind of think not.
But that's probably not the end of the world…

My comic was originally inspired by Japanese Manga. So much that it became a parody after a while. Now my comic is more inspired by Seattle and the different people I've met there. Though the new Nariko was totally inspired by a Rockabilly Red She-Hulk from Marvel Avengers Academy. Rock and Rule is amazing though!

I rewatched the old Transformers animated movie and realized how much it's affected how I visualize movement and layout. There's a couple times where i've had a panel where Tredd is about to push some vague button while fighting in the tank. Pretty sure I got the image from the scene where Galvatron is about to launch a whole bunch of missiles at the Autobots while he's doggin em in space before they crash into the Planet of Junk (I binged that movie A LOT). http://s3.amazonaws.com/media.drunkduck.com/users/PIT_FACE/assets/Screenshot%20%2860%29.png

Starting from about age 10, I was obsessed with reading the comics of Richard Corben, Gaetano Liberatore, and Moebius. Those aesthetics are pretty much ingrained into my drawing style. When I was about 8, I saw the movie "Barbarella", and that movie has had a huge effect on my design sensibilities. The logline that I use to describe Mindfold to publishers when I am making a pitch is "Lawrence of Arabia meets The Wizard of Oz, with aliens"

"An unknown disease turns the crew of a deep space probe into blood thirsty monsters after they recover an alien from a derelict space ship." Planet of the Vampires and the Alien films meet the incredible melting man with costumes and sets echoing the classic Italian space operas of the 1960s.

"Aliens turn women into mindless, indestructible and topless warriors to stop a top secret space program." Helps also to have that one sentence summary. I took the names and a couple of the characters out of War and Peace as well as Enemy at the Gates.

Invasion of the boobsnatchers? XD

When pitching a script or concept you're supposed to boil it down to something already done to make it easily imagined. Like invasion of the Body Snatchers meets Platoon with a doses of Animal House and boobs. So sometimes you can be quite aware of where we're stealing stuff.

As far influences like this, I said before, with some of the Godstrain's dark subject matter, I don't wanna really know if it's bubbling up from my subconscious!! :)

That is uncanny! Delightful! And, with the realization that our subconscious is doing things we're not aware of, quite disturbing!! As someone who so prizes freewill, that an unseen being of sorts (my subconscious) is influencing me, perhaps making thoughts and ideas (that I think I come up with, that I think are a product of my conscious mind, but are really not...) *hides under the covers, but IT is still there with me...*

Well, for me it was kind of an inspiration between real life and fiction. Specifically, the dynamics of famous duos who were complete opposites and butted head yet ultimately were great friends kind of like myself and my siblings.

Nausicaa inspired a lot of Seiko's personality but not appearance. (I've been basically creating the same looking character in stories since childhood.) I had forgotten, until seeing it again, that Raidon's design is very close to the villain in a Lupin III PS2 game. I have had opposite experiences too. Some series I watched later had characters that remind me of my own.

Throw it all into a pot, bring it to a boil. Stir until thoroughly mixed. Simmer, add spices to taste. Serve. The items and ingredients may be time worn, but the mixture and added flavor can be novel.

Hahaha, I see it! That was a great cartoon. There are some things I'll be watching and just think "OH MY GOD! I did not realise I was working from this so heavily!". Every time I watch the 1995 Ghost on the Shell movie, or Starblazers (where I got my love of battleships), and countless other things that secretly influenced me from Robocop, to Aeon Flux, to Lawrence of Arabia.