Lending a hand | The practice of cross-promotion 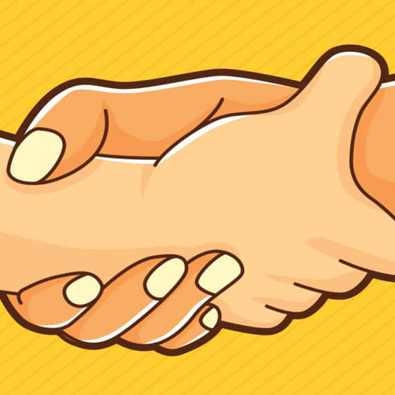 The hardest part of creating a webcomic is not the writing or the art, but actually attracting and retaining those coveted pairs of eyes. Building an audience, particularly when you are starting out with no prior projects, feels like a never-ending uphill trek and there more than a few pitfalls along the way.

However, there is one hiking crutch you can use to support not only you but those who are facing a similar struggle; namely the practice of cross-promotion. The concept behind cross-promotion is to have creators support one-another by promoting each other’s works on webcomic updates. This may be in the form of weblinks in the description or visually at the end of a page/episode. Not only are you both benefiting from the exposure of your audiences, it builds a sense of community. You’re helping each other up the hill.

As well as this, you are exposed to new works as it is generally people who are starting out that are looking for help building their audience. You can get in on the ground floor of a project and have the knowledge that you were there from the beginning, and who doesn’t like to brag they knew them before they were famous.

Have you had experiences with cross-promotion, both good or bad? Is that something you would like to see here on The Duck?

Let us know in the comments section below!

Till next time lovelies!

eh, ive encountered a couple people who resisted links swapping. One comic guy told me that he didn't link with ugly websites or ugly artwork. i don't think his comic lasted another month or so. the attrition rate for a-holes is bigger than for community driven people.

I was thinking about putting guest characters from comics that I read as background characters, villains or companions. Seems like a fun idea. My comics is still pretty early in the story but i was thinking some cross over story would be fun to do

I used to do that a lot, well links but now I kind of stay really quite and don’t say much. I just post. However once in a while I do ( with permission) add guest characters into the comics. Although those characters mainly belong to people who I know from other sites that read my comic, kind of like a thank you type of thing. Since I am so lazy to actually do fan art of their characters I just guest add them. ^.^” But I do believe it helps out even in the smallest of ways I find out people like having little spotlights on their comic or even little guest roles in comics, it seems to brighten their day which is one reason I still try to do them.

I included another creator's characters in a major supporting role with permission and it was a blast (using characters from Jay's Internet Fight Club)! Having one of my characters appear in The Godstrain was fantastic too (and that character referenced the Godstrain in my comic)! It's nice to expand our universes a little bit, as long as the crossover somewhat makes sense! I'd love to do more of that!

I include a links sections on my main site for this reason.

All the cross-promotion was stellar to me. I strongly believe in alliances.

I'm totally for this! In the Godstrain, I had numerous cameos of characters from other comics (with their permission), with notes and links to their stuff in the author notes. Sometimes I just go inspiration from other comics, and I try to always mention that as well. I do love how we all read, share, cross-reference each other's stuff! It's makes us feel like one big incestuous family... Wait...!! *joking joking*

This sounds like a really good idea. Thats probably why I didn’t think of it myself XD I will have to try it out!

Definitely more people should do this. Especially similarly-themed comics should help each other (I think El Cid did that with adult comics if I'm not mistaken, it was mentioned in a recent quackcast) by cross-listings and links. I have never had a nasty experience with cross-promotion. They were all good.

More people should do this! El Cid here on DD was a fantastic proponent of this here.