The Origin Stories of Webcomics | Part 1 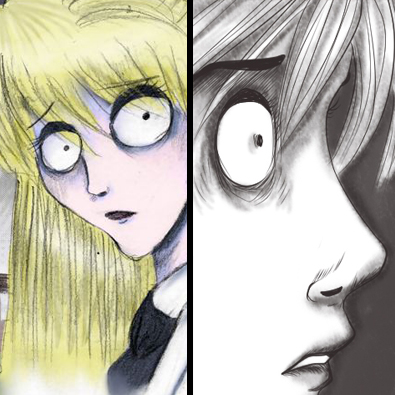 For this week I decided to take a break from the usual topic of comic promotion and, instead, talk about something more personal. Every now and then I get asked how I got into webcomics and, as an inevitable follow up, where should they start. If you’ll indulge me, I am going to go into my origin story as a creator and how my approach towards crafting stories and visual narratives evolved from my very first webcomic that started here on DrunkDuck.

I was 14 when I started my first webcomic. It was drawn in pencil thankfully not on lined exercise book paper. I had yet to get a copy of Photoshop so I edited the pages in a photo editor that came with our first computer, the good old Windows 98. Believe it or not, this is where I did all the lettering and colouring. Looking back I am surprised at how I managed to make a program exclusively designed for editing and touching up Kodak photos work for comics, albeit terribly.

The first pages of Dragon’s Quest were uploaded to DrunkDuck.
And it got slllllaaaaaammmmed.

The page was too wide, the art was terrible and let’s not even begin to talk about the melodrama that was the plot. However, there were those lovely users that took the time to give me honest and incredibly helpful tips on how to reduce the size of my pages to at least make it easier to read; that and my dad coming home with a free copy of Adobe Photoshop Elements and a tablet certainly helped kick my poor attempts up a tiny notch.

Dragon’s Quest soon gave way to a new shiny project I called “Flirtatious” and very clear knock-off of Sailor Moon with bizarre magical girl costumes, a rapidly escaping plot that in retrospect made no sense all hand painted and again, uploaded to DrunkDuck under the moniker El-J Crowhurst (again with the melodramatic streak). This did a little better and I even managed to paint over 100 pages. Given I was now 15 that was a big deal for me. I worked on it every moment I had, taking the comic to school to sketch in between my schoolwork, (I was banned from taking out a sketchbook in certain teacher’s classes), inserting friends seemingly at a whim.

Eventually, though, something began to happen with that story. Flirtatious began to evolve to the point where the characters became something beyond their shallow building blocks. They took a life of their own with their own desires and woes and I wanted to know where they were going to take me. It was the first time I realised the characters were talking to me, telling me where to go rather than me controlling the reins. I let them do it. I gave them free reign.

Of course, as a young, undisciplined creator, I soon focused my attention on my next, rather more successful and structured webcomic, the one I am still working on (though slowly in between my other projects), Puppets and Strings. The version available now is actually the second attempt at writing this story. The first, which is now lost somewhere in my parent’s house if it does exist at all, wrote itself into a corner somewhat and, as school began to ramp up, I let go for a while.

It was originally inspired by Tim Burton’s, The Corpse Bride. I loved the wide-eyed stares of the designs and the blend of creepy but endearing that had always lurked in the zeitgeist of my life since The Nightmare Before Christmas first caught my eye when I was five. Here I was, this seemingly happy-go-lucky girl, but just below the surface lurked a fascination with the mind bendingly bizarre and twisted; of ghosts, mysteries and folklore of the unexplained.

Of course, I’ll leave the rest of that story to another day.

In all of this, DrunkDuck was the first place I came to. Each bad and good idea was given a platform to be tested, with an ever-evolving community of dedicated creators on their own but similar journeys. It has been one of the biggest supporters of my work, at every stage, no matter how bad and part of this origin story owes a great deal to it.
We’ve got a lot planned for its future, but for me, the spirit will always remain.

So until next week share your creation stories; the success and the disasters!

**Help add notifications for new comments!**
Please donate to our Indiegogo drive to raise many for the latest improvement to DD: Comment notifications! We know that everyone wants those.
Contribute here - https://www.indiegogo.com/projects/drunk-duck-improvements-notifications-community-website/x/4410947#/

It was a great cartoon! You don't look a day over 25 ozone :D

Hahaha, I watched "Agghhh Real Monsters" when I was at art college :D That makes me feel old XD

I'm a story addict and ran out of episodes of my favorite show. So I started drawing rough storyboards for my own to share with my roommates. They started evolving. (I wrote stories starting ages ago, but I didn't like to share them. Since this later story was one I wanted to share, I made it visual because my audience had short time and attention span.) I didn't find DD or webcomic until I started uploading as a backup.

Cool topic emma clare :) I never liked reading books in grade school so I would draw stories during class and my teachers usually hated me.lol But watching nickelodeons "Agghhh Real Monsters" as a little kid inspired me to try to draw little stories. I liked drawing Ipkiss,Oblina, and Crum.

Interesting! I can certainly see the Corpse Bride influence!

Ha, I started very late in life... but other than that, this feels very familiar to my initial forays into webcomicing!!

Oh the nostalgia <3 I started pretty much the same way with Wolf.

Hey, That was pretty entertaining :D It's great to know how people started out and came to comics. It's surprising how many people grew up with DD actually.