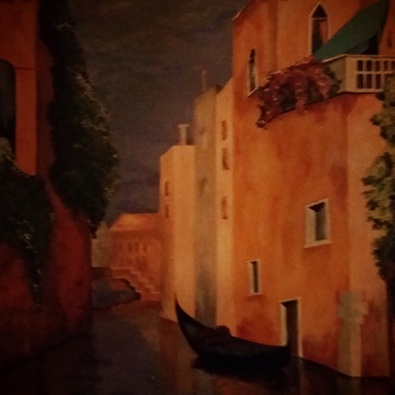 What usually comes to mind when staring at a blank white wall on the outside of a building or on the inside of a nice restaurant? I am no stranger to mural art in all parts of the process: I have studied it, designed for it, and painted many around Los Angeles. The only problem with designing murals is the amount of steps that are required until a design is approved.

At one point, I had so much creative energy because of my comic on this site that I let my employers know that I had some art talent to offer. Some people heard about it and asked if I could help design some images for a school. I was so excited because I would have a chance to create a tangible piece of art that would get a message across to help inspire students. I spent over ten hours and one sleepless night creating a design only to find out one week later that the school staff wanted to go in another direction.

A while later, I was asked to design a mural of a kindergarten playground of a story they had written, again, my design idea was scrapped a second time and lost to a drawing of the Itsy Bitsy Spider that was conjured up in less than five minutes.

I was ready to turn in the towel after having my mural design rejected a second time and then I was approached one more time to design a mural for an outdoor public park space. I decided to cut down on my losses and spent less than one hour drawing very geometrical, boxy, and half-assed designs using generic shapes on photoshop. I printed the final designs and submitted them to the project planners and a few days later I was told that the final design had been approved and it was going to be painted on a wall. I was floored and flabbergasted that my subpar work garnered more appreciation than the ones I had lost several hours (of my own free time) preparing.

The moral of the story is this: Be careful and make sure you do not let any future employers find out that you have artistic ability especially when not working in a creative field. Chances are, they will find a way to make you create uninteresting art and give little thought into how much energy and time went into the design process. I wish I was just kidding, but there are people who like individuals with artistic talent, but have little to no desire to pay them for their time and talent.

.::.
What's Quacking?
Do you have any original art to contribute to our stock image database, announcements, community projects, ideas, news, or milestones to report? Please leave general comments below or send a PQ to kawaiidaigakusei. Email me at kawaiidaigakusei(at)gmail(dot)com.

HAHAHAHAHA so true! This is like any design project: do not put in any effort till you know there'll be a return on your work. Only provide the simplest designs to people because people are tasteless morons who will discard days of work without a second thought. It the design is for a community, school or sports team they will co for something cartoony and butt ugly. Those people are the worst.

I've helped with murals - can't fathom doing one all by myself!! Yikes...!

You should consider the other side in this. After all think about that poor pope who just wanted the ceiling done and that pretentious sculptor who went on for years. When doing art one should always use the KISS principle. Keep it simple and short. Not everyone wants your masterpiece when they only want some color on a wall.