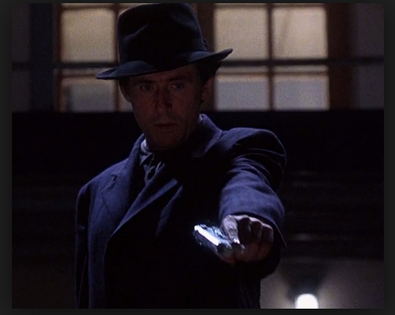 This time, how about we talk the fascinating device called the Unreliable Narrator. For anyone who doesn't know, this type of narration (usually first person in prose, but not necessarily) tells the story in question…but is not necessarily giving an accurate description of what's going on.

The narrator may be evil. Or crazy. Or an alien. Or narcissistic. Or just lying. Or have some other kind of twisted notion of reality that departs from the usual. I don't remember what the story was where I learned of this in high school, but the idea of it fascinated and stunned me at the time. “So…the story isn't necessarily being told truthfully?”

Such a cool idea, and it was left to the reader to interpret what was or wasn't true, and to wonder at all the ambiguities that might be in there. Exciting stuff!

It can be done in other mediums too, of course. The twist ending of film “The Usual Suspects”, that was ripped off endlessly afterwards made use of the device. Another, lesser known one with a pov twist was called “Frailty”, a horror/psychological thriller directed by Bill Paxton (rip). I don't want to spoil it, but there's more going on than first meets the eye.

The technique in Frailty involves what you see, and don't see, and the assumptions the audience will make based on what they see or don't. I don't want to get any more specific than that, but this brings us to comics.

Can the unreliable narrator be used in comics? Of course! There can be as much depth in a graphical story as in any other medium. It can be a more obvious “twist” kind of thing, like in the movies I mentioned, or can be more subtle, with the readers questioning whether the pov character can be trusted.

I believe there's a good way to do an Unreliable Narrator Twist, and a bad way to do it. What do you think? If a story is presented one way, then turned on its head in the last couple pages/minutes, is that a “cheat”? Is it acceptable? It probably has something to do with whether there were “clues” scattered throughout the story that (hopefully) weren't picked up on the first time through, then become obvious after the ending and upon second viewing.

Ah, that reminds me of a masterful job along these lines, in the film “Shutter Island” (the Martin Scorsese version is the one I saw). The clues to what's going on are there, and I noticed at least some of them, but literally shrugged them off as screenwriting/filmmaking imperfections. It made the payoff pretty satisfying!

“Cheated” twists don't have that satisfaction. Much as I enjoyed the movie “Saw” (the original), the ending was pretty much out of nowhere, with a “clue” early on that really wasn't a clue at all.

The worst, since we're on the subject, was probably the late nineties movie “Reindeer Games” with Ben Affleck. Neat idea, but the twists came so furiously at the end I was snorting derisively at the screen (and I'm usually a pretty forgiving viewer I think). And even all these years later, I can find an excuse to mock that turkey of a film.

I don't know if I'm right about this, but I interpreted Deadpool from, well, “Deadpool” to be an unreliable narrator. His ultimate, perfect relationship, the powerful but somewhat corny and dopey version of Colossus…it played to me like Deadpool's version of reality. It matches his fourth wall-breaking character.

Have you ever used an Unreliable Narrator in your comic, or seen it done in comics? Nothing's coming to mind offhand, although I'm sure it's been done, certainly in old horror comics at least.

This has been your Thursday Newspost - or so I'm going to claim!

I have never done one though I may wind up doing one as a side story. If nothing else, to explain why some characters act the way they do and show to what extent they just never learn.

Comics with unreliable narrator: "Rat Catcher" by Andy Diggle. He develops the story in the antagonist's perspective. The reader believes he's "the hero" until the plot twist reveals many bad things and selfish motivation of the antagonist. As the antagonist, he has the control and screwed the protagonist in the end. Brilliant.

Strange bit is the original book Forrest Gump was narrated by the lieutenant Dan character. The writer was a platoon leader in Vietnam and Forrest was a composite of a couple of his soldiers.

@KimLuster - HAHA! I didn't even think of Forrest as an example. This Unreliable Narrator is a much used and incredibly flexible technique !

What an interesting article!! The best example the Unreliable Narrator I know of is Forrest Gump!! Good lord the twists he puts on history!!

@KAM - It would've been neat to see Cap in the Deadpool movie. They're delightfully contrasting characters. But I loved that portrayal of Colossus! And I could justify his departure from the other versions of the character by considering Deadpool the Unreliable Narrator of that movie

Deadpool's version of Colossus was odd, as it didn't resemble any version of the character I'd read, but thinking over which Marvel characters would have worked better in that part I realized that Captain America would have been much better as the guy trying to teach Deadpool how to be a hero.

I believe Agatha Christie did the first Unreliable Narrator, although he didn't technically lie to the audience, so much as... gloss over a detail that would have revealed his involvement. Critics blasted Christie for this.

@oz - I'll check it out! @bravo - dagnabbit! You mentioned Rashomom last time; it oughtta been included here as the king of this Unreliable Narraror device!

It's been used for comic effect too where some of the flashbacks pov are just plain ridiculously stilted. TV Guide used to call it a Rashomon tribute way back when they had useful episode synopses.

Again Rashomon is a good example because it has all the narrator's being unreliable until the last one. This is also done in detective stories where there are flashbacks from the pov of those involved. Murder on the Orient Express? Columbo among others (the all too brief Ellery Queen series) did it a few times too occasionally with the detective correcting the narrator.

I liked this in The Usual Suspects. The film Dose Of Reality does this... it's quite harrowing at times. When the twists start to come they change things a lot. I recommend it to you Banes, I think it would be right up your alley! I think there have been webcomics here on DD that have been done in this style but I can't recall them right now... I've read so many that's it's hard to keep track. HAhahaha! I literally forget whole comics, so much so that I could read the same comic for featuring 3 or 4 times and not realise it- I HAVE done.