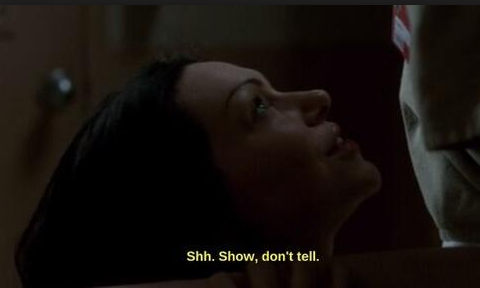 Anyone who ever dabbled in creative writing or any sort of narrative work, had the phrase “show, don't tell” hammered into them. The sheer anxiety of being caught ‘telling’ rather than ‘showing’ made us all think in terms I assume only exhibitionists do.

The truth though is, that sometimes telling is absolutely imperative in order to be able to show things in a way that the audience will care.

The trick is to dress up all the telling in the trappings of a show.

The easiest rule of thumb is “if it sounds like a lesson, it's got to go”. Nobody wants to feel like they're reading something that will be on the test, be it in comics, books or movies. Nobody wants to feel like they're working to remember or learn information in order to be able to understand the plot. That level of immersion in data and trivia comes when the audience is already a fan, and not during the movie, or the show, or the comic- i.e. not during the main attraction.

So how do you go about infodumping without it being an infodump?

The first thing to consider is how much of it you'll need to do. If it is a lot, if the audience needs to be introduced into a whole new world, then consider the strategy of the “naive main character”: a character that is just as alien and unfamiliar with the environment and the world you have created as the audience is.

As that character comes in contact with the world, he/she will ask the questions the audience would ask, and deal with issues and problems and obstacles that come with this ignorance, gradually learning about the world with the audience. In this manner, the process of learning about the world is what IS the plot, at least for a first arc, or a first act. It makes learning the info interesting, relevant and fun.


Another strategy for infodumping in an entertaining way is to create a situation where characters that already know of the world need to act, interact and react in ways that aren't typical, and will be designed to showcase the information that needs to be imparted: a disaster situation where rescuing and damage control need to take place is ideal for practical characters to break rules that ruffle feathers, and in the arguments that ensue, teach the audience about the world they are being immersed in without it seeming like the plot is screeching to a halt in order for a lesson to take place.

Another way is for situations where a character narrating is such that it is normal, expected and advances the plot rather than forces it to stop. A parent consoling a child by explaining or giving examples that at the same time give the audience much needed info, a teacher addressing a class with a warning or a praise, a school yard fight between kids about something, and so on and so forth.

All in all, what you need as a creator to do, is make sure the plot stops for nobody. All the rest is going to take care of itself.

One good thing about Web Comics is you can use the Author Notes for dumping alot of info that indirectly relates to the story. El Cid does this alot; his scientific blurbs really help understand the nuts and bolts of a scene to those that care about the detail... I did similar in the Godstrain when there was much talk about quantum mechanics and time dilation - most of the meat I put in the notes!!

KAM: Well, for sure such an abuse of the tactic would make for bad writing :)

I have strong feelings about Cabbageheads (nitpicking term) having seen too many bad uses of them, and the recommendations to use them in mediums that have ways to avoid them. I had actually spent about half an hour writing a rant on it, before just cutting it down to my previous comment.

KAM: I would expect you wouldn't allow your character to ask a dumb question but one that the audience would also have. That wouldn't be dumb. And all that jazz.

I've heard of something called "the Pope in the pool" technique, too, which suggests having something interesting or unusual going on while the exposition is being delivered. That seems good - but having some form of conflict/urgency happening seems even better

Great article! One key to this is having some kind of conflict in the exposition scenes - as lots of information is being imparted, the old man doing the talking is doing yoga in front of the uncomfortable detective. As she questions a cashier, the reporter is jostled by other customers and the cashier's boss is shouting to get back to work.

I use in-story-bureaucracy for exposition. Reports to superiors and whatnot. It also helps establish what information the characters are privy to, versus what the audience knows. Often, though, it's not exposition as much as tiny bits of plot summary to remind the audience what has been happening (which they already saw).

Is it really showing when you create a character to ask a dumb question that needs to be explained? It's just telling disguised (sometimes poorly) as dialogue.

Doing an adult comic, showing is definitely preferred to telling. ;-)

Very wise words and good strategies! Yes, something you need to tell. I go ON and ON about terrible infodumps but in something like the anime "A Horizon to nowhere" where you're dropped into a BIZARRE world the audience NEEDS a little hand-holding. I got halfway through the second series and STILL didn't understand it so I gave up. What little explanation they gave was impossible to understand because it lacked context. In order to understand something bizarre and new you need to be able to subtly relate it to an analogue that the audience knows about.