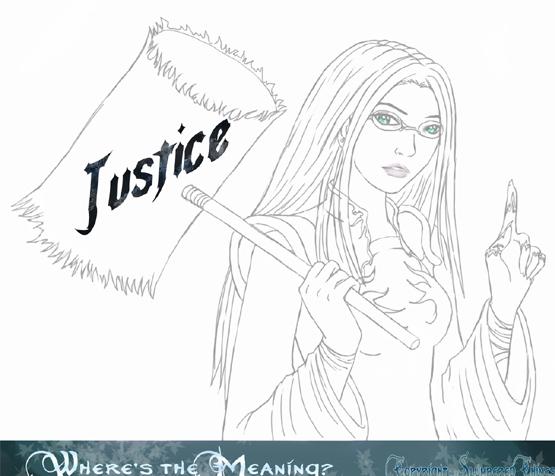 If only I was Justice?..

Dearest DD community, this is Nigellashade.

I know I had plans in updating this comic this year.. I thought I had a pretty good start in the year.
But so many things has happened.. My sister and I lost our place.
Even though our mother lived near by, and after our dad passed away. Nothing went smoothly for her within 6 month after his passing.
So we got rid of things.. and was forced to move in together in one place.
After everything settled, and got internet.. well not so internet.. The guy gave us *one* choice of connection.
my comp was the main connection to the ourlet, while my sisters, and my mother connection was through d-link wireless..
It didn't work.. the connection canceled out..
wasn't getting email, and couldn't stay long online.
Until my sister fixed it, after she phoned about the problem.
Well.. this person told us, we have another option for our links to be separete through using no wireless through my comp. O.O

Well my sister was swearing afterward the whole time, “why didn't the guy who set up the wireless, says it was our Only option?”
Who knows why…he was a guy who connected the wires.. he didn't really work for the internet service we have an account with.
~~~
Okay as that part worked out.. thought other things would be fine.
I know with the recession, things became hard for everyone around the world.
This was one of the reason my sister & I, and our mother pulled our resources together.
And it seemed to be working, but thanks to a certain lie saying our ecomony is doing alright.. (such liars) they hyked up everything.. as if we needed that.
And now our place.. an apartment.. ecause it's build up to code.. How apartments should be build.
The owners here is forcing everyone that's renting these places either to buy or leave.
Everyone under lease here, has begun to move out already.
And what this place is asking for?… for a two bedroom with a small den. Over $300,000

Word to the wise in Canada, especialy in Alberta. The place aren't worth that much, a house worth about $60'000 has gone up to over $200'000.
I know that's crazy and rediculas..But again no law regulations protects us from these people sending us out in the street.
The reason why my sister and I had it rough for a full decade of our health being attacked, was because we were exposed to black mold for many years..
This is what scares me and my sister.. and my mother.
We will be forced into a dive, cause all of the reasonable places is going for condos..
True it has all the things like washer ,dryer, fridge, microwave, dishwasher.
But what can I say… it doesn't have a view, it doesn't have a large balcony with a hottub.. or this place connected to a swimming pool, or recreational facility.
I guess after moving for many years.. about 13 times in our life time so far and counting.
We're tired of it…more than most of you know.
My mother can't move again… not in her condition.. and my sister did hurt herself the last time we moved this year.
And I had a lot of unrest for a long while. I just don't know what to do.. or know what's yet to come.

As for updates.. I'm sorry I couldn't give any of you a colored update.
I did speed draw pages, and touched them up later on.
But what i wanted to show you, is that I did 3d modeling in the backgrounds.
But because I have to give an update, the backgrounds was converted into a sketch look.. But really it was done with modeled and skinned.
As for the characters, they're drawn by hand.. But because background takes up more time to perfect.
Rather do it in 3d, so I can angle it through camera view and screenshot it.

Take care everyone.. Peace to you all and enjoy the upcoming page agter this one.

BTW: I tried to draw myself as a judge.. in a Fantasy garb like robe.
Yes my hair is that long… I like having my hair long. *Lol*
If only I had a huge judge hammer, to beat some sense in who runs my country.. including my province. Lol

The other update, with be later on.. tonight

*Angelic hugs to you all*

To Everyone who did post.. Thank you for bearing with me.. Wazaga: I think there's a lot of people who's having there issues.. Either they lost ther jobs, and there homes at the same time. Wazaga I hope where you are in the world, your doing well. Take care *hugs* Tantz Aerine: Yeah I think there's coruption anywhere we go in the world. It's sad but true. If only people in power made a difference with every part of our world.. so we can have peace world unite. Even have a better ranking system, so we can function better in todays society. Happy to see a fellow canadian, hope your experiences is better than mine. *hugs* to you .. (hehe yeah, had short hair as a kid..didn't agree with me. Long hair all the way lol). ^^ Jenshin: Hey there! yeah it's been awhile..Lol.. yeah I'm hanging, on a thread.. or is that a lasso.. ^^;; Yeah I've seen people lose there positions as soon the recession was annouced. And they lost everything. Even kids moved back to ther parents, this includes extra families in a place. And people that has money in the bank, is trying to be careful what is being spent out. Thank you for your blessings, I wish I was able to come back with better news. I hope things will look up, for all of us. Thank you pal *hugs* ^__^ Artdude: Yeah the tragedies keep piling up, I don't know where to put them sooner and later. O.o But who knows how things will turn out, I wish I had more alturnatives to work with. I don't know if this is a test at each turn, but it has been hard to cope. I hope things will look up.. hope sooner than most. It's getting rediculas that I felt I didn't get a break form it to begin with. Thank you so much for your support, I miss updating. And getting my story out. Angelic hugs to you and your family Jay. ^^ Twilight of the Gods: Hey there! Feeling the love from your words already. ^o^ Yeah, it's becoming pathetic.. I think me as an single person, have complained more than most online. I don't like that part of myself. But being 32, it does take a hit, how I want to protect my family, but don't have the means to do so. I think after awhile all we think about how we can help the ones we love. I wish love can be stronger than anything in the world, so many can live by those means. Maybe life in gerneral can be a good place to live. Thank you for being sunshine by your words. *hugs* back to and take care.. ^__^ ~~~ I'll be updating the page soon.. Hope to get better with my schedule, so I can update a bit better quality pages. Love you all, and extra Cyber *hugs* to all.. ~M~ ^o^

I'm so sorry to hear about your misfortunes. Times are tough all around I suppose. I don't know specifically what's happening in Canada, but it seems pretty bad. I hope that things start to get better for you and your family. Much love ^.^

It is great to hear from you, but it is a shame things have been so rough for you and your family.

That sounds awful! I had been wondering what had happened to you, and I'm so sorry that the news so bad... Sounds like nothing is looking up for you. Please hang in there! I hope your family makes it through this year intact.

As a fellow Canadian (I got dual citizenship) I can't help but sympathising and wishing I could help you make short work of all these scumbags! (and yay for long hair, too!)