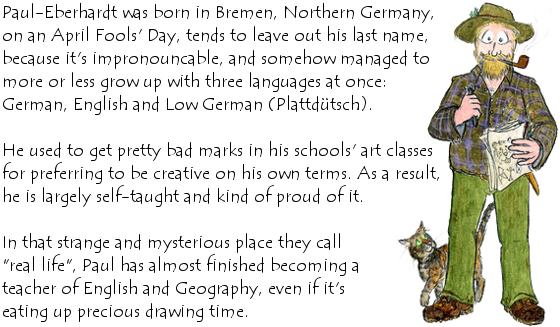 Webcomic on the Duck:

Master the Tiger / Gundula un de Stuventiger
(in English & Plattdütsch)
Just read it. It's pretty much self-explanatory. ;) To my knowledge, the Plattdütsch version of this comic is the only webcomic in that minority language so far.

Maura, the mole, she lives in a hole. One day, she makes an encounter with the digger of her dreams, a great big excavator, that sends her straight to Mole's Heaven (which is underground).
The book is quite literally for all ages, like 8 - 88 (and over), fully illustrated in black & white, and entirely written in verse.
Btw. a Plattdütsch version is in preparation as well.

As it's a rather small publisher, it is unfortunately not yet available internationally, but I'm feverishly working on it. (You see, I read the small print of Amazon's terms and conditions - nothing against Amazon in general, but at the time: no way, sorry!) Naturally, I'll keep you up-to-date on this and also properly advertise it when the time has come.

Below is a list where it can be ordered so far:
My publisher: http://www.zba-buch.de/aktuelle-buecher/_n-ius-reihe/
In German bookstores: https://www.buchhandel.de/buch/MAURA-THE-MOLE-9783945130032

Some other artwork of mine can be found on my DA page: http://Pauleberhardt.deviantart.com


Finally, here's a link to the Youtube channel of the world's worst fun-punk/thrash-crossover band I play in: Gummi Arabikum
I recommend cranking up your speakers really loud. 8D

Master the Tiger
E
Gundula the witch leads a more or less normal life in Bremen until she gets a new pet, Tiger. So far, so good, only Tiger turns out to be more than just the name of that kitty-cat; he is one. This is the English version of "Gundula un de Stuventiger"

All Unicorns to Battle Stations

Slice of life short comics that have very little to do with unicorns. Should be subtitled "Gunwallace learns to draw, very slowly". Sometimes contains mature themes.

1810 England. It was thought that humans walked the path of enlightenment leaving monsters and dark things behind. However, those monsters and night stalkers merely hide in the darkness, as a young maid, Bernadette, soon finds out.

And now the tale of a party of adventurers who got lost in a dungeon... and the one Paladin who had no choice but to try and save them. It's Character Development. A daily photocomic with toys.

Kellwood- a burgeoning tourist town, where only a few know of the things that hide in the dark. Also Kellwood- a forest deeper than anyone realizes, another world where Faerie and monsters dwell. In between these two worlds, there is a cabin with strange inhabitants...

Surreal comics by the creator of the critically acclaimed SQUIRREL MACHINE and FOLLY. Cochlea & Eustachia defy analysis, as they act on whims beyond the author's scope of rationale. The reader is assured that the narratives herein contained are uncontaminated by plot, character development or sensible dialogue. Relax and look at the pretty pictures.

A comedy/adventure/fantasy story which refuses to try and cash in on WoW or D&D. Currently in Chapter 13 - Mordrolvia

A vampire tries to make it in the mortal world.

A wizard tries to raise an orphaned dragon in a world of magic, war, and adventure. He soon finds out a dragon does whatever it wants...and he may make all the difference.

The lame life of the Duck and his pal Quail as well as some intriguing Drunk Duck site history.

A collection of short horror stories. Tragic tales of love and death told via the watchful eye of a mysterious narrator.

The Continuing Saga of George the Dragon! This is the tale of a Dragon named George. George is old. So old that he has lived in every age of the world from Medieval to Modern. His tales are rather silly in nature. Join in on his (Mis)adventures!

When the Garrick family decided to adopt a pet, they chose a pair of very unusual cats. As different as night and day, these interesting and mysterious creatures would turn their lives inside out. Winner of 2008 IPPY Award.

Rick's life is going up in smoke, and he's about to be blown sky high.

Follow Leo's adventures in the fantastical world of Jabaru on the Duck! Or if you'd like to read ahead - check out Leo's latest adventures on the Jabaru website: http://www.jabarucomic.co.uk/

Shanku has left her home behind to explore the wide world around her. Out of her small forest home she finds more of her own kind and new friends. Love, loss, and adventure await her as she discovers the secrets her clan struggled to hide. But at what cost...?

Kara Kali and the Wind

This 9 page fantasy story originally appeared in volume 1 of "The Forbidden Book" published by Renaissance Press in 2001. This version has been colored.

Follow the adventures of Lancaster the Ghost Detective as he discovers the strange world of the paranormal!

Not the master of his life, not the hero of his own story: Built up of bits and pieces, potential super-hero Mechaniko hasn t got a mother or even a soul. Why, they didn t even give him a brain! Still, they all have the highest expectancies of him...

A group of misfit monsters are sentenced to live in a castle belonging to mad scientist. (Some comedy, horror, and a little bit of everything else.)

Someone has drained the Nexus Pools. Zara the Nexus Keeper and her bodyguard Killerkind must track down the perpetrators. Now updated daily!

Creatures that seem to have come from an artists imagination get up in his face and his fridge. It's in the humor category because "Zen Farce" is not an option!

the misadventures of Bones, the back alley,thrash metal mutant mad man and his side kick friends, Puke,Charlette the Harlot and Jack the Ripper.

Evan's life gets supernatural after he encounters a vivid ghost.

Illustrated and co-written by Jessica Safron. It's about a dweeb in the '80s who accidentally becomes a satanic ninja. It's inspired by radical 1980’s media, mostly movies, but also video games, cartoons, anime, heavy metal music, and the “satanic panic” of the era. It's kind of like an '80s teen comedy movie injected with over-the-top ninja violence, lots of T&A, and elements of sci-fi, horror, and fantasy.

A character-driven superhero comic, set in the UK? One that's not a spoof? Oh, you'll be wanting Shades then!

Strange Attractors is a postmodern take on adventure and romance comics, an attempt to meld genres, to fold, spindle, and warp the semiotics and sensibilites of Silver Age comics to our own idiosyncratic purposes. Strange Attractors pays tribute to th

Terror Of The Undead

A zombieinvasion caused by the radiation from a crashed spaceship's fuel takes over a small town. This is only a preview. To buy the entire story, go here: http://www.lulu.com/spotlight/Zombarbie

Five classical composers suddenly find themselves swept into the 21st century. They have no choice but to acclimate. Yeah, it's pretty far-fetched (and not too historically accurate)!

Kimber Lee's got a problem! She can do things only possible in dreams; she's super fast, inhumanly strong, and nearly indestructible! Therein lies a conundrum! When you can do the impossible, how can you be certain you're not dreaming?

Meet Kazimieras, a 13-year-old Lithuanian boy growing up during the Soviet occupation of his country. In color.

The People That Melt in The Rain

On Laura's 1st day of school she discovers a woman trapped inside a painting hanging in the school library. Huya,a rain god,brought misery and pain to the town of Deluge many years ago.Can Laura free her? Will she unleash this menace on her new hometown?

The Pools of Zara

The Nexus Pools have been drained, making cross-dimensional travel impossible. It's up to Zara, Killerkind, and Gallons to track down the poolrobbers.

The Wings And Vampires Appreciation Movement. Join us. You know you want to!

Strange things have started happening in the local cemetery since Fernando Fritz rose from his grave... could this zombie be the cause of all the weirdness, or does it just follow him? Updates every 13th of the month!

Jamie has spent her whole life hoping for something amazing to happen. But when a mysterious artifact is brought to the college to be studied, things get a little bit stranger than she'd bargained for. as for what's inside the box itself...

Sci-fi superhero space opera with dieselpunk influences - the ongoing adventures of all the heroes and villains I managed to think up over the last thirty or so years .