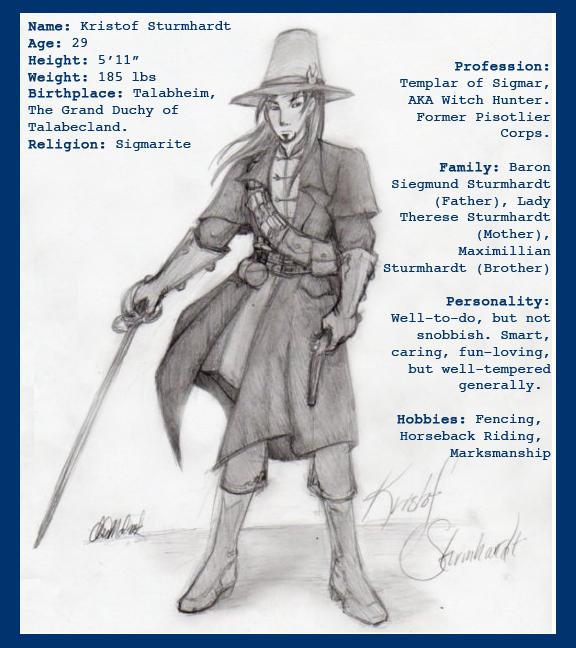 Background: Second-son of the Merchant Siegmund Sturmhardt. Kristof had a rich upbringing, having received a well-rounded education. His brother, Maximillian, was geared to take the leadership of the family, but had anything happened to him it would have fallen on Kristof's shoulders. Kris, however, took to his noble youth with excessive abandon. He was the scourge of the Noble's daughters for quite some time, and not just in Talabheim.
Eventually it came time that the Nobleborn take his place within the ranks of the Pistolier Corps of the Imperial Army. This decision was reached shortly after a pregnancy scare with a Nobleborn lady. Who was married. And older than Kristof.
After his tour of duty, the boy, now a man, had seen firsthand the horrors of war, the ravages of Chaos-mutants, heretics, beastmen, and the first glimpses of the Plagues of Nurgle. Kris hardened himself to a decision. Without returning home, he volunteered his services into the Templar of Sigmar.
The decision was not one his family was happy with. The Sturmhardts would send threats, warn that they would break their ties to him, and plea for him to come home and cease his ‘foolishness’. Kristof ignored it all and endured the hardship of the training. His noble birth didn't help said hardship in the least, however. The Witch Hunter Captain of his Chapter House tried, on multiple occasions, to break Kristof's will and send what he deemed a ‘less than worthy’ trainee packing.
Kristof, despite all the tribulations, had after several years become a successful, and rather unique, Hunter. Preferring to find the truth in a case instead of merely torching and asking questions later, Kris was welcomed into the Order of the Gryphon. War was spilling into the Empire's Provinces and Kristof would do his part. However, in a final bid to test his temperance, the Captain he'd trained under had decided it was time to give him an apprentice. A difficult individual who didn't take well to authority, and bore the accent of a lowborn peasant, named Myna Reinard…