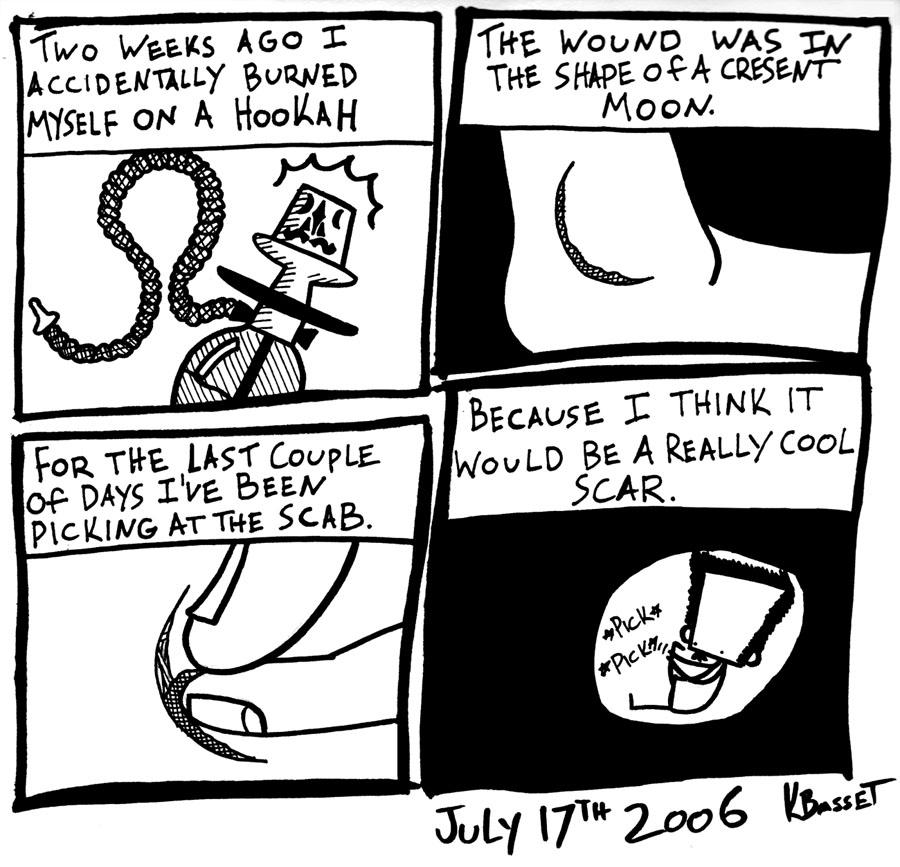 I really do want it to scar…

lol. Thats something I would definitely do.lol

i have a scar in the shape of a monkey from a 3rd degree burn on my arm, right above my elbow. it's cool, you should try to get a monkey scar.

i love all the patterns and ur style is pretty close to mine if you would actually see some of my sketchs. I love it!

You crazy! Well as long as you're picking and not pealing. That's bringing images to my head. How did you get your foot on the burner anyhow?

cresents are cool i added this too my favourites

Then pick damn you, pick!

I have a bunch of scars on my knees from learning to ride a bike. My dad wouldn't let me start on the grass... right to the street... I wasn't very good at riding bikes...

ok, i'm not going to give you shit just in case something's wrong, but.. ok, a little shit: WOW! you maintained a daily updating schedule for FOUR days! how DO you do it?! ok, kidding, but you better stll me making these 'cause i was ready to get all into them.

Yay, something else for me to read. Comic is good even if the characters have arms.

Okay... so my mom found an old lego set of ours (Beth and mine) and I took it to my house and I was putting it together on carpet. While trying to shove two pieces together on bouncy carpet, my hand slipped and I gouged an inch-long cut that was pretty thick along the outside of my thumb. I thought it looked cool. I literally did nothing to it so it would scar. And it did. And I like it. =) We're messed up in the head. ~sihayadib

That would be an awesome scar

i always wanted a scar. over my eye, you know like that lion in that film. Thatd be so cool.

Wow, I only realized just HOW insanely hysterical it was until I read the comments. Good work!

Oh the stories you could tell.

hahahah oh my god, that would be the best scar ever! keep at it! XD

Part of me is a little grossed out, but the other part is laughing..I like this more personal slice of life comics.

And it would be a cool one.