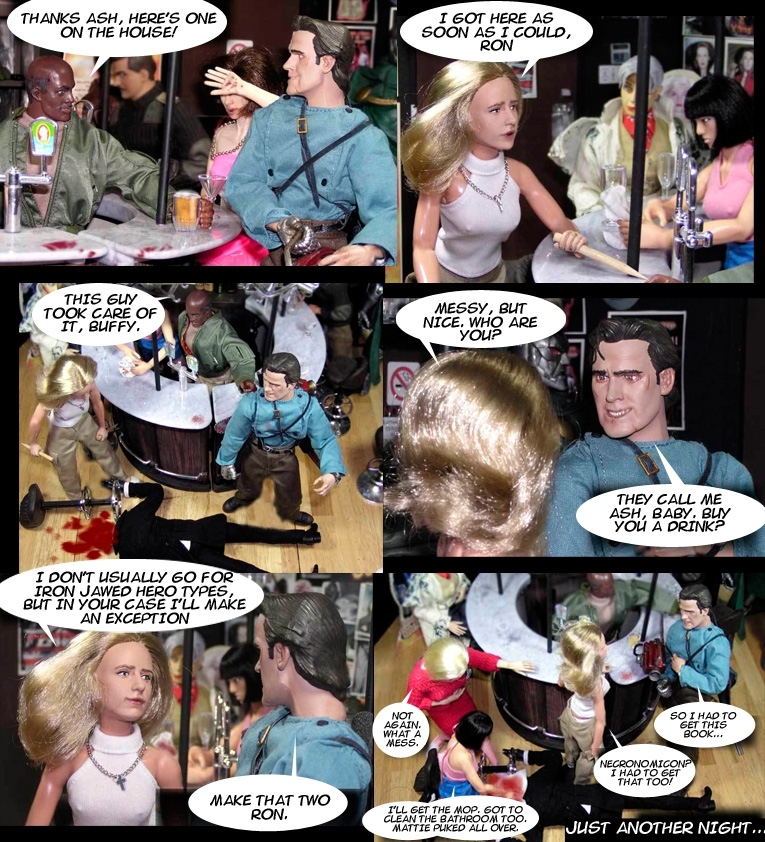 A Night in the Flaming Coffin page 4

And this wraps things up for this one. And there's Belle coming out of the back where she was busy juggling the accounts and considering some new scripts.

Mattie is gone from the scene in panel 3. Splattered in blood she staggered to the restroom as Suzi mentions in the last panel.

The police will consider this “self-defense” Unlike guns there are no laws against carrying chain saws. The bar is somewhere in the Southwest USA near a military installation.

Belle's outfit in the last panel was knitted by my grandmother for my sister's Barbie doll almost fifty years ago. I took it before my sister casually gave her extremely valuable original Barbie to her neighbor's daughter. They probably put it on Ebay almost immediately and made a small fortune.

But then I sold my 1970s era GI Joes at a yard sale for pennies. Mine were in pretty sad shape so I didn't think they were valuable. How wrong I was. A broken bald fuzzie head 1972 GI Joe goes for $40.

I caught up with the last page. Belinda's best pic is 'The playing card that didn't pass muster" for sure ^^.

I just like to say the filter in the page "In the beginning: Aunt Trisha page 2", with lines, was a good aesthetic solution for a "flashback" image (I know it wasn't a flashback there...).

So difficult to see old toys you sold for a song or gave away now become expensive collector's items. You get great expression out of static toys, by the way!

Had a GI Joe back in those days. One before the kung fu grip. Before the fuzzy hair. And a real wooden locker box. Gone, gone, gone. Like my sanity and many brain cells.

The REAL hero would be the one who cleans up that mess.

Excellent! My sister had an awesome barbie collection! Sadly, I had a hand in losing lots of it... :( Oh if only we knew what we had!!