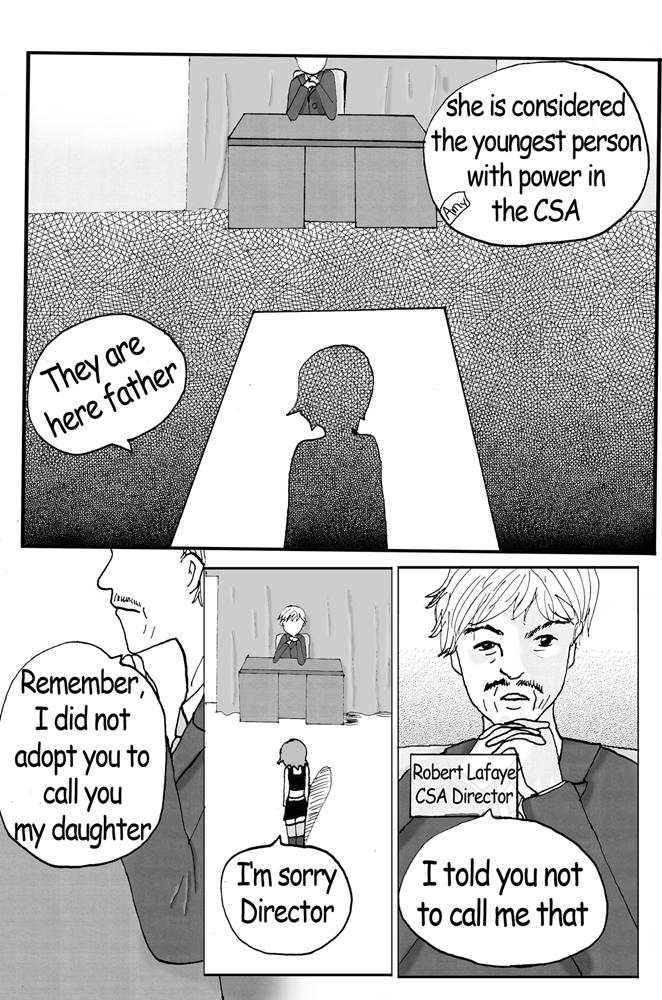 A quick/late update. I just couldn't get myself to shade those curtains in the back!!! (I hate my backgrounds because they take so long and then look terrible anyway). I'm considering busting out 400 dollars (US) this summer to go to a short term manga school That's for 5 classes. I wonder if it will be a waste… I feel like if it's in Japan though, even if the course sucks I'll be twice as good by the end of it (coz they're so damn good!).

But for now I must focus my attention on China. Apparently my Chinese is getting much better! I'm actually having conversations with some people now!!!

Oh yeah but about the page… So yeah Lui obviously has some family issues that she needs to sort out. I guess she's a legacy of sorts though. No one would be able to head their own squad at age 16 unless they were the daughter of the director. So unfair. I love drawing pages like this where Lui's the victim though! Expect more torturing!!!
______________________________

Saillestraife: Thanks for checking it out! I'm glad you like it!

Theskunktrainer: Thanks for the comment. I'm actually pretty pleased with how that panel came out too :p

Aghammer: Unfortunately, it's pretty hard to get into the CSA. The prerequisite is to get into a crazy place called Jonko's mind. If you're willing to do that I'm sure they can find a spot for you!

Emily Elizabeth: Glad we're favoriting all of each other's comics! Can't wait to see more of your work!

usedbooks: Thanks for commenting!

I read the banner, and tried reading it from right to left. It just confused me. =P

i cant wait till u add to ur comic

Hey, interesting story! I hope that I'll get to read more soon. ^-^

oooh emotional! You should go to the manga class, Im sure you'll get something out of it, would be worth the money I think :) I learnt alot from my Uni course (its specifically for comics)

Ooo, so cold! XD I've always wondered how manga is taught in Japan. And I second Kristen's position - shaaa~re shaaa~re! :3

oh and congrats on getting better at chinese! suan-le.. (I think that means never mind?)

D: what a jerkface he is!! "I adopted you solely for power-trip reasons." lol jk OOOH OMG MANGA SCHOOL?!?!? *drools everywhere* *cleans it up, embarrassed* that sounds like the coolest thing ever. $400 is a little steep, but, but, but...! DO IT! if you end up going, please impart to me the secrets... o_O

Call him what? Director or father?

helloooo daddy. sounds like an expensive class but i bet it would be worth it!

Nice work on the page, and I bet the manga school will be fun xD Good luck if you decide to go!