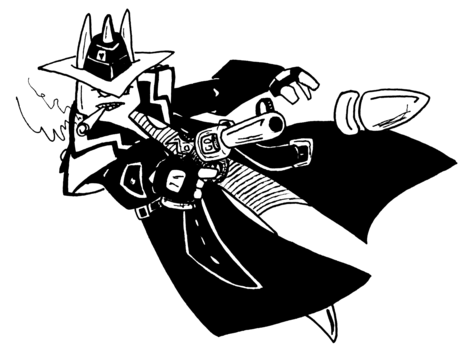 Detective Fork is known throughout Silver City as a private investigator who takes down the big dogs in crime, a reputation he built after busting the city's largest mob boss, Silver Videl, during his days as a police detective. Fork still works closely with the police, even if it's unofficial. Detective Fork is rigid, gruff and tough but his inner thoughts veer towards the philosophical. He also has a soft side, though that mainly comes out around the ladies he likes. Fork has no qualms about breaking the rules and his anger towards great injustice, when unleashed, can lead him to do things that could land him in jail. However, he has a sense of duty and honor that keeps him from going crooked and drives him to uphold the more important laws, maybe not of the police department as much as the civilized world. Fork often tells his clients he'll “do his utmost” to solve their cases and he means it. Fork likes to ride in style on his assignments and does so in his car, The Fork Rod and on his motorcycle, lovingly named Satan. To family and friends, Fork is simply called “T,” which is the first letter of his first name. The mystery of his first name, however, is something he will reveal to no one since he HATES his name. Fork only shoots his gun when needed and claims to never miss his target. So far, he hasn't been proven wrong.

That would make a cool t-shirt! Hey, why did you change the ratings on the your other comics? They're now "restricted".