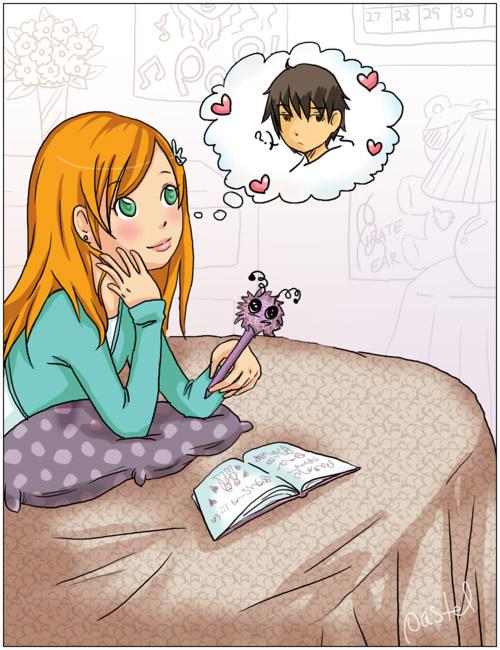 So, I'll be experimenting with different styles, colors, backgrounds, word bubbles, fonts, etc, while doing this comic. Be prepared for changes out of nowhere.

In the end, I want to compare my latest pages to these early ones to see how I improved. You're welcome to comment on things you like and things you dislike, to help me improve. I won't mind. :)

Dear Diary,
Daniel came over my house again today!!! He said, ‘Hi Lola.’ and then went into Ian's room. OMG!!! He so totally almost remembered my name. He is soooooo dreamy.

Fuzzy pen! It has eyes on it....it's like it's staring at you...menacingly.... Ok, now that I got that out of my system, I'm interested in seeing where this goes.

I really like this so far. Your style is unique too, faved-ness

I do so love your work Pastel!!

For sure. Just wacky hijinks. XD

hey hey, cute intermission, i like the "no romance" comic idea purely because romance between 10 year olds isn't somthing that society is particularly interested in, in this point in time, enjoy school

Thank you!!! kawaiidaigakusei: I'm hoping to do a chapter on the relationship between these two characters. But right now I'm hoping to set the tone that she likes to make stories of him as a prince and her as a princess and basically has a crush on him, while he thinks of her as his best friend's little sister--and only that. Though this isn't a romance comic, so nothing major will happen.

Wow!! This page is so cute and sweet, I can totally relate. I think my roommate has that same pen. Also, did you make sure he knew your name was Lila and not Lola? haha

THats so awesomesause! It looks great. I love the background is black and white and a little faded.

cute, and the pen reminds me of that thing from the jetsons

awww its a thinggy-ma-bob. i wonder if it tastes like purple?

I find the pen oddly hypnotic.

omg! Lila is so cute lol!

Those pens were popular amongst 10 year olds in Ohio >_> Really unpractical. But fashionable.

That pen disgusts me. *glare*