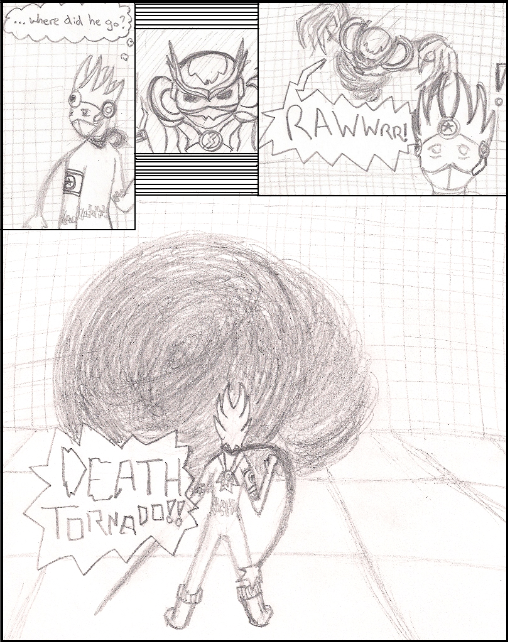 Seriously though? Sorry for not updating in literally, YEARS.
But aside from graduating high school and surviving my first year of college and trying to find a job and losing all the data on my desktop and… gahhh, it's been hectic.

Also, obviously, i'm drawing it now. I'll probably get around to re-doing all the previous comics as hand-drawn, but later on. There's just more freedom than with sprites, ya know? You're not limited.

1) I'm changing the way some navis look. Cause I can. And they might make it easier to draw, or I have something planned, or it's just too hard to see the little sprites and the parts that are never shown and such.

2) Yeah the grid background's the battle background from the game. Figured i'd use it to represent when combat's on. And the 3x3 x2 battle grid I decided to do without. It made no sense to keep it like that once I started drawing it, ya know? Now it's just a large battleground where they are warped (or something. I'll figure it out) to fight. Or something.

3) I can't color or shade (with colors) worth S***, so i'm not even going to try, =P If someone wants to color the comics by all means go ahead and I'll post those up, =P Contact me first though. Also, I know it looks sketchy and rough, I DO kinda like that, but I'm still trying to get an idea of HOW i'll be drawing it, you know? And also I guess I like the rough way of drawing, sorry if you don't, but i'm not forcing you to read. =P

4) Also, If you don't like the art or hate everything or complain. Once again, I'm not forcing you to read it, you know? =P

Other than that I hope everyone is happy about the finally-updating! And hope to keep you all entertained. I figure i'll update at LEAST once a week. Hoping to make my Sch. Mondays and Thursdays, most likely. But don't count on it until i'm all settled with the style and everything, (Sorry!)
=P

This is the single greatest achievement in sequential art in the history of time/space. I bow to your immense talent O' great innovator!

Haha, Yes. Yes I am. Quite frankly, I'm more surpriized you still READ this, 0.o Haha!