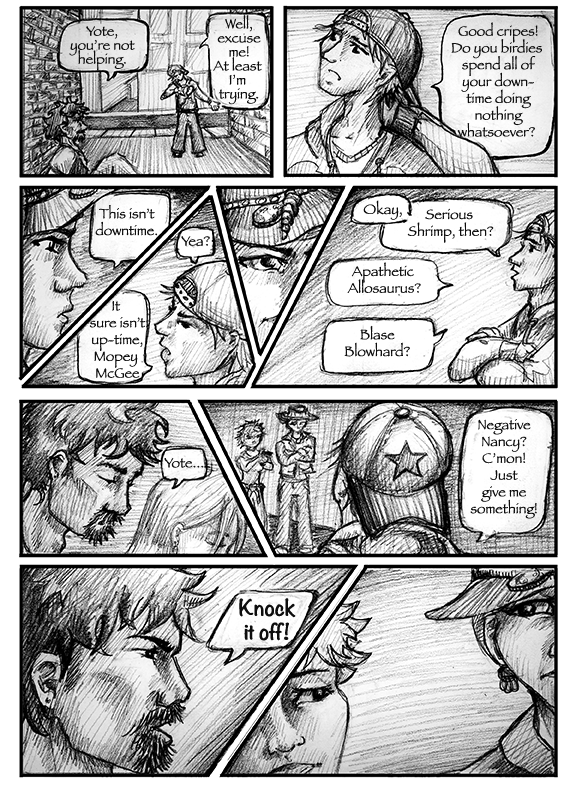 I thought I had uploaded this, but then I remembered that “The Duck” had been down when I finished this.
The following has nothing to do with the story of this comic:
Actually, I was just starting to get back into drawing Fated Feather again when Drunk Duck lost its drunk and passed out completely.  Then I tried to load some things on Smack Jeeves- but don't you know they have a limit?  What a drag.  On top of all that I moved into a house- and that house has no internet- and work got Craaaaazy as it usually does during the holidays, so I didn't even notice I didn't have the internet at home (thanks to smart phones), and theeeeen this afternoon I thought, “Hey!  I should draw some Fated Feather.”  And so I came to the most excellent Stella's Coffee Haus on Pearl Street and stole their internet to read through some archives and upload this comic.
The following has nothing to do with personal life:
If I had more time- I would draw a whole comic devoted to relationship between Kaanis and Raivyn.  What mysteries must lurk beneath?  There are things I would like to tell you about these two, Dear Reader, that I cannot for fear of the amount of time I would have to take to do it justice.  Their characters began as side pieces -pawns in the game of chess in which Hawke and Wolfe were the King and Queen, and they have become so much more.  The more dirtied the main characters become with their sins, the more these two shine.  I have learned much about them over the past decade, but there are some things I still don't know.  Would Kaanis defect for Raivyn since Raivyn clearly won't defect for him?  Will they come together in the end?  The truth is, Reader- I know how this story ends, but I don't know if it will end that way when the time comes.  With each passing year, it gets harder and harder to see things the way my 18 year old self saw things.  I draw these comics for myself, and I pretend that people still read them with the months and months of pause between the updates, and the vast amounts of incredible comics that are coming out these days that put this one to shame.  So, I must be writing this rant for myself more than for anyone else.  =)

But can alliteration cut all tension and hostility? Only time will tell.

Oh I remember reading Fated Feather years ago! I hope you are still working on these from time to time!!! I'm no longer working on Stiletto or Diva Petz, but I have a lengthy new piece of work in my signature style called YOUR CHOICE...hope you can check it out. I miss you!

one thing you can be sure of, if your stuff in somewhere public, there are people watching. maybe they are quiet... but there are always people there it seems. one of the things that bothers me most is all the friends i let slip away because real life got difficult and drunkduck kept falling apart. keep at it i say, at your own pace of course... i know my characters have grown and changed in my absence. i keep hoping one day they'll all be back.. in one way or another, hehe.

And what a rant it is! I think they both go off and start their own pirate crew. To hell with the emo leaders! Fancy hats and daiquiris for all! Good job on lots of angles and facial expressions to keep the dialogue moving. And sneaky, sneaky use of lines to escape the bricks.