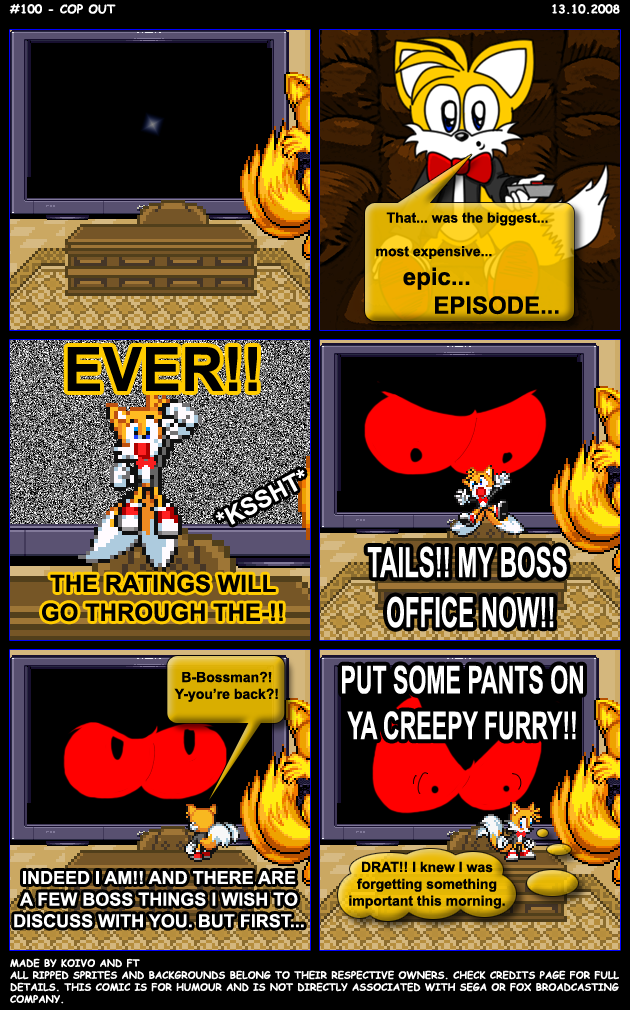 Yeah, that's right. No, you're not dreaming and you're not dead either.
Feeling Rushed is back, although maybe not quite the way I was hoping to return.

Ok, so without further ado, here's your comic…

And here's a preview of what it was supposed to be…

Satisfied? Good, if not, then click the full story link to find out what went down and whats going down.

And remember to tune in next week for an all-new Feeling Rushed.

not bad good jop you can see my comic there awsome

Where did they say it was cancelled?

that was uncanny and thrown together.

What, no one ever postid it here? They canceled the comic about a week after this was made.

Huh i guess it is dead.

*sigh* I really feel sad looking at this page and im sure many more too... it was a great comic sonimy is definalty one if not the most awesome fan charater ever... now when a great comic like this finishs u always feel litte sad but u remember it with happiness... if it finished with a worthy ending... but when they like this... it just stops suddenly u have a sad feeling that never goes awlay i can look at page with out being so i...i just can't read the whole comic agian it brings back good memorys but you know those memorys were cut rather quickly with out a fitting end making you feel like it ... *sigh* i really am sad im not please believe me... good bye sonimy... that... hurt

Dammit! We've been waiting so long! I can't take this anymore!

Looks like somebody gone get their 8-bit ass kicked.

We could have waited until you finished the flash special instead of loading this unfinished piece of crap. The series deserved a better send-off than this.

you update less than vg cats

I can die happy now

i gess you were "Feeling Rushed." *drums*

I bow to your comic making abillities.

Oh, and also, I am aware that I should have said that in October. :/

If no one minds, I'd like to share my thoughts. First, I think it's a bad idea to turn Sonimy back to Sonic. Not only is he/she cute(in a 'Amy without the obsession' way), but much of the humor that has developed over the course of the comic just seems like it would be harder without him/her around. Plus, I'd really like to see his/her eventual reaction to what Knuckles said back in Episode 93. Second, I'm sure that I'm not just speaking for myself when I say that I considered Sonimy to have Amy's voice the entire time. Finally... actually, I think that's it. Oh well.

and now you take a year to make the next episode

YO CAMRA CHAO! you gotta get back to work... after this little fattie. *smokes some ciggaweed*

OH MY GOSH!!*runs and gives Koivo a hug and kisses Koivo repetedly* You're finally back, and still as funny as you were before!*Koivo blushes* Good job!