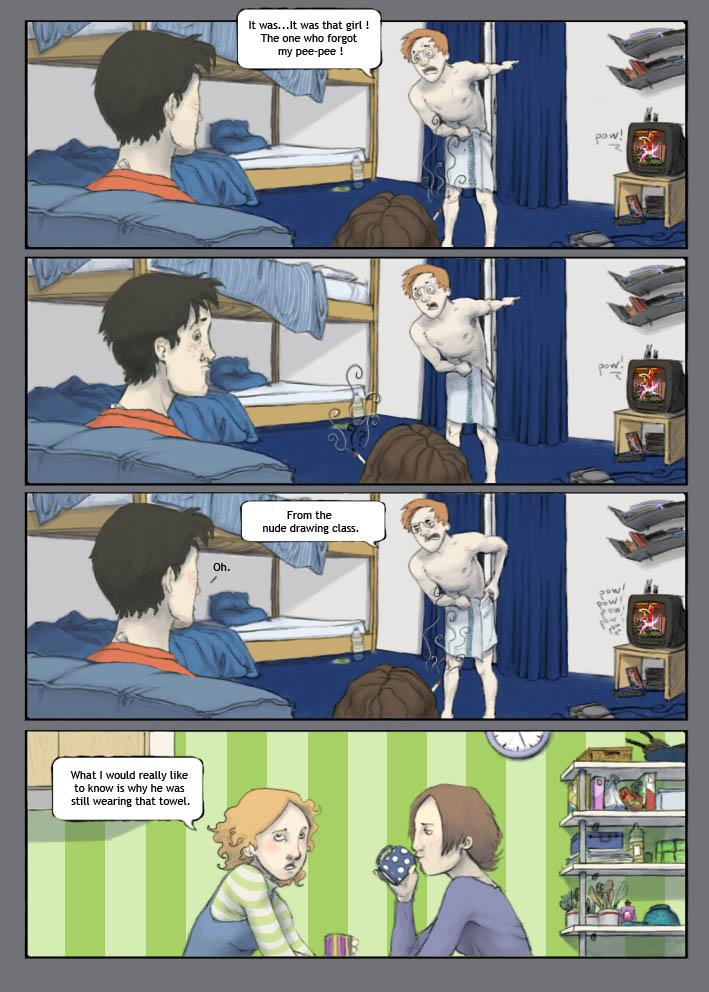 The Towel, the Pee-pee and the Smoke Signals

Well that's my archive uploaded ! You'll have to wait a little before I update again : )

I just discovered this little gem and I gotta say Im terribly depressed now cuz its your style I want but you got it. Lucky stiff. Anyways... faved. Brilliant and cant wait to see more. Scott out

OK, it's been 5 and a half months and you still haven't updated. I'm guessing you're through with DrunkDuck. Shame, I really wanted to know the rest of the story! :(

You're back! I remember you from Smackjeeves. Yay!

Do most guys call it a "pee-pee?" Because that sounds a little foofy to me.

I've reviewed your archive and have fallen in love with this strip. The artwork and the characterization is fantastic, and methinks I am detecting an interesting plot development.

hhahahahahahah XD I gotta say I love your art! This definetly goes to Faved* and I know I dont need to say this, but still, keep up the good work! ;)

Hahahaha! I'm faving this one.

I love your style! it's very original :3 good job.

wow caz, i really loverz your comic! and your drawings! must. update. soon.

this comic is really really funny so far. I love the art too.

I just can't believe she forgot the pee-pee! .. Omg, that's so funny!

Keep going. This is one of a couple things I actually like on this site.

I love your style. I noticed your sketches in the sketch forum. Definitely a cute comic. :)

I love the silence in the second panel! Fantastic artwork, great characters, and where can I get one of those stethoscopes that lets you smell through walls??? That would be amazing!